The BC SPCA is generally opposed to the feeding of wild animals. Whether intentional or unintentional, feeding can lead to poor welfare and even death of wildlife, and is a significant source of human-wildlife conflict. Therefore, the BC SPCA encourages municipalities to adopt bylaws that prohibit intentional wildlife feeding and encourage the management of wildlife attractants as unintentional feeding sources.

The BC SPCA recognizes that bird feeding, though a popular activity, carries risks. Backyard bird feeders can facilitate the spread of disease, provide inadequate nutrition and increase the risk of window strikes, predation and conflicts with other wild animals. Except for liquid hummingbird nectar feeders (due to their specificity and low attraction to other species), the BC SPCA does not support providing bird feeders in months when there are abundant natural food sources available. During these months (which vary from region to region), native plants, well-managed bird baths and bird houses can be appropriate attractants for birds.

The BC SPCA is opposed to intentional hand-feeding of birds like jays, gulls, pigeons and ducks, geese and other waterfowl, and recommends municipalities and parks strongly discourage feeding through education, bylaws and enforcement.

Approved by the Board of Directors – June 2019

Unintentional food sources such as compost, garbage, pet food and even bird feeders will attract unwanted wildlife, which can become a nuisance or safety risk to residents through their increased presence, noise, droppings and property damage.1 Further, improper waste management and wildlife feeding can lead to increased rodent activity, disease spread and public health concerns.

Intentional or opportunistic feeding by both residents and tourists leads to the habituation of wildlife. Wild animals who become habituated to people are more susceptible to predation and vehicle collisions, and more likely to be involved in nuisance issues in urban and rural settings. Animals adapt to an artificial abundance of food, but when that food is withdrawn, they can starve or become stressed and aggressive as the resource becomes increasingly scarce. Intentional or opportunistic feeding may also have effects on populations over time. When habituated or food-conditioned wild animals are perceived as a nuisance or public safety risk, the response often involves nonlethal methods (e.g., exclusion, trapping) or lethal methods (e.g., hunting, poisoning, culling) of control. This type of conflict can be avoided by modifying human behaviour to prevent both intentional and unintentional feeding.2

Backyard bird feeders cause unusually large numbers of birds to gather in one place. These gatherings can facilitate the spread of disease, provide inadequate nutrition, attract rodents and other wildlife, increase the risk of window strikes and predation, and have negative impacts on populations.1,3 Feeding birds can also lead to increased predation from outdoor cats and raptors.

Bird feeders must be kept clean and dry to prevent illness or disease from rancid food. Liquid hummingbird feeders do not attract rodents and other wildlife, but they can attract ants, wasps and other insects, and can cause deadly fungal or bacteria infections if not cleaned thoroughly and regularly, or if the nectar is prepared improperly.

The BC SPCA does not recommend providing bird feeders between April and September (or depending on the region of the province, in months when natural foods are abundant) and should only be considered during harsh winter conditions. During non-winter months, birds can be attracted to native plants, particularly those with seeds, berries or nectar as a food source. Features like bird baths and bird houses can also be an appropriate attractant. Bird baths should be regularly cleaned to prevent the spread of disease and mosquitoes, and managed appropriately to prevent cat predation.

Bird feeding by hand (e.g., bread, rice) commonly occurs at roadsides, parks and public spaces with birds such as jays, gulls, pigeons and ducks, geese and other waterfowl. This type of feeding causes birds to suffer extensively from malnutrition, bone deformation and death, creates conflict with humans, and contributes to environmental degradation and water pollution.1 Even with nutritionally appropriate feed, hand-feeding or broadcast food spreading has negative consequences and leads to increased conflicts between birds and people. Food-conditioned birds may become aggressive towards people, become a nuisance or damage property when they gather in large numbers, and stray feed can attract rodents and other wildlife.

Ungulates can be attracted to certain garden plants and safe green spaces like backyards, and can become habituated with repeated interaction with people or pets, especially when they are intentionally fed. These problems create the perception that ungulates are overabundant and lead to culling proposals. However, ungulates can be effectively managed with non-contact hazing, anti-feeding bylaws and enforcement, road signage and speed enforcement, landscaping changes and humane deterrents such as motion-activated sprinklers.1  For more information, see the BC SPCA position statement on Urban Deer.

When visiting other countries, tourists create conflicts directly by feeding wildlife, or through tour companies using food to bait wildlife for viewing and photo opportunities. In addition to the animal welfare concerns, habituation and conflict problems caused by tourists are likely to persist for the local communities long after tourists have left.1 For example, opportunistic feeding of wildlife by park visitors can lead to traffic congestion, personal property damage, begging, aggression and injury, illness or even death, for both people and wild animals.4

The BC SPCA supports public education (e.g., signage in public areas) and the adoption of bylaws in parks and municipalities that discourage the feeding of wildlife. The Society also encourages municipalities to adopt bylaws such as those outlined in the BC SPCA’s Model Animal Responsibility Bylaws, which provide recommendations with respect to wildlife feeding and attractant management.5

Attractant: Means any substance or material, with or without an odour, which attracts or is likely to attract animals; and without limitation includes antifreeze, paint, food products, unclean barbecues, pet food, livestock and livestock feed, beehives, bird feeders, offal, improperly maintained composts, restaurant grease barrels, and accumulation of fruit in containers or on the ground.

Habituation: A form of learning where an animal gradually reduces or loses their fear response to a stimulus due to repeated exposure. Habituation has negative consequences when it leads to increased human-wildlife conflict.

Nuisance wildlife/Pest: Any wild animal who is perceived to be in conflict with humans, their animals or property. Neither term is preferred by the BC SPCA, as both have negative connotations.

Wild animals: Species that have not been domesticated. Wild animals have evolved in complex ecosystems resulting in mutual interdependencies with other animals and the surrounding environment. Wild animals may be exotic or indigenous, and wild-born or captive-bred. 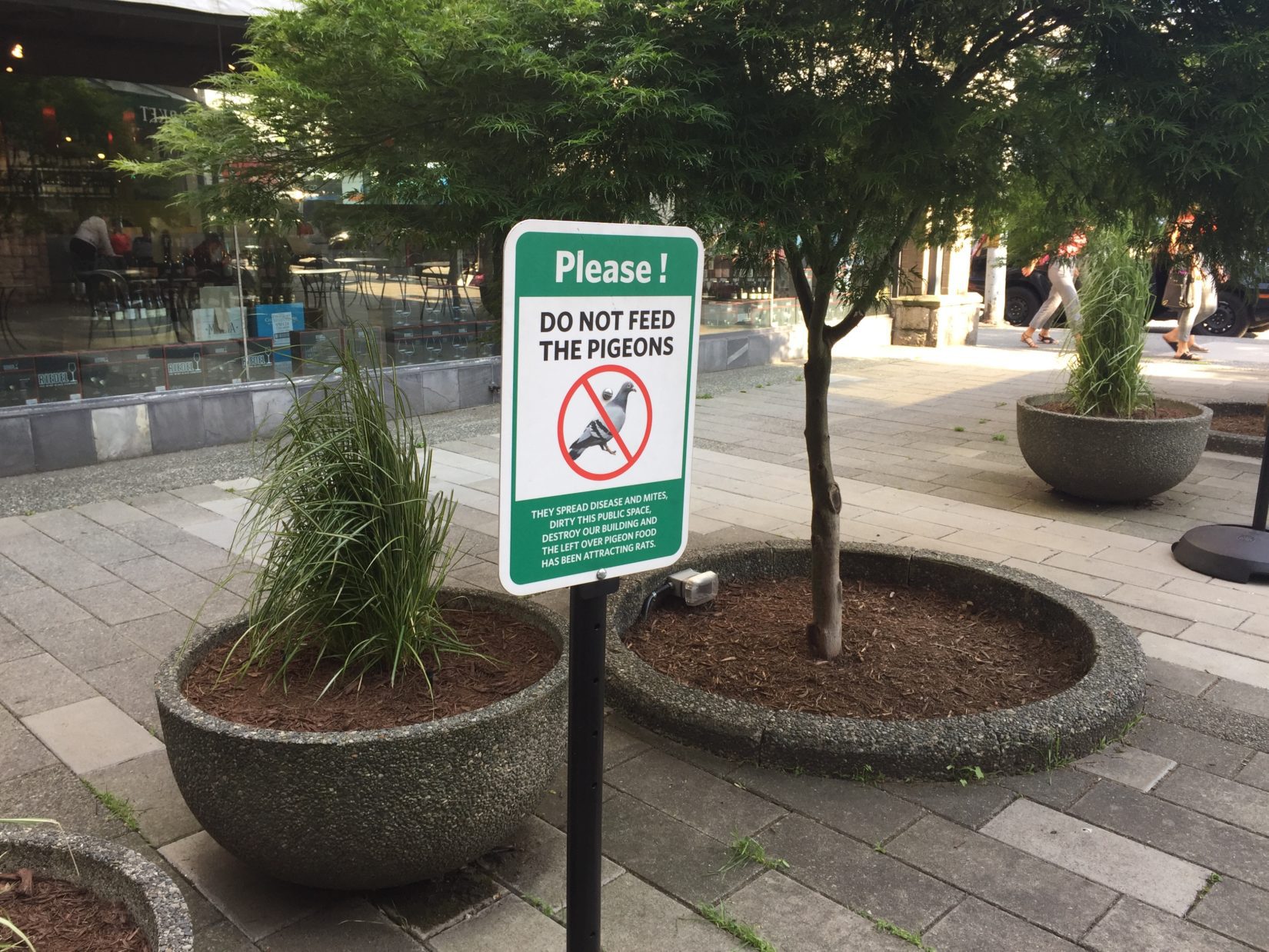 Trouble with squirrels, raccoons or other wildlife in your home? Help can be humane.