What do you think is the best way to transport thousands of chickens? | BC SPCA

In summer 2017, undercover footage of a chicken catching company loading chickens from a B.C. farm for transport had many Canadians appalled and concerned. Workers were seen running over birds with forklifts, ripping off body parts and holding chickens by their necks.

Calls came into the BC SPCA from people across the country expressing how much they were disturbed by the footage – one woman was even unable to sleep! They all wanted to know how this situation could be prevented in the future.

Catching and loading chickens for transport may be carried out by the farmer, the transporter or a contracted catching crew. The process is not monitored by government, the SPCA or any outside agencies. This leads to disagreements between the farmer, catching crews and transporter over who should be held responsible for monitoring the birds’ well-being during the process. In reality, the health and welfare of these birds is a collective responsibility.

While the undercover footage demonstrated egregious abuse, handling is always a stressful time for birds. Most chicken catching in Canada involves grabbing and holding birds upside-down by their legs once they are caught, often three or more birds per hand. This usually causes the birds to go into “flight” (try to get away) or “freeze” (freeze in place) mode to avoid danger.

Chickens are a prey species. They don’t make a lot of noise when they experience pain or stress. In nature, raising a ruckus would make them more noticeable (and appear weak) to predators. They would be more likely to become another animal’s dinner as a result. So instead, they freeze in place. 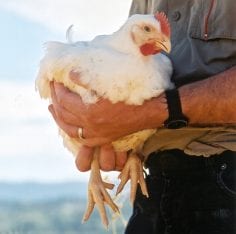 A less stressful method of catching involves picking birds up one by one and holding them upright until they are placed in their transport container. It’s more time consuming for handlers to do it this way, but it’s a lot less stressful for the birds and they are less likely to get injured.

This is the approach taken by Roger Harley of Harley Farms, a SPCA Certified farm in Keene, Ontario. The Harley family raises chickens on a 1,400 acres of sustainable farmland. They also raise heritage breeds of cattle, sheep and pigs. Roger’s mantra is, “if you can’t do it ethically, perhaps you shouldn’t be doing it.”

Catching chickens could also be a mechanized process. A machine called a “chicken harvester” designed to catch chickens mechanically is operated by remote control. It moves through the barn slowly, picking up birds as it goes. Chickens don’t have the same fear response to the machine as they do to people. The chicken harvester has demonstrated a significant reduction in the number of injured birds compared to when chickens are “hand-wrangled” by people.

Tim Rempel, owner of Rockweld Farm, raises SPCA Certified egg-laying hens and broiler chickens in Abbotsford, B.C. Both he and the Harleys will only transport chickens in weather conditions that ensure the birds do not overheat or freeze. In the summer, they choose to transport their birds at night, when the weather is cooler and there is less traffic on the road.

But adapting transport practices to the weather is something producers can’t always do without losing a significant amount of revenue. In an industry with extremely small profit margins, sometimes the death of chickens on a truck is less costly than rescheduling a pick-up or arranging for an extra truck to come so the birds have more space.

Dr. Trever Crowe from the University of Saskatchewan in Saskatoon gives credit to transporters, acknowledging that many he has worked with are actively trying to address some of the issues that result in bird deaths. Dr. Crowe says the “most important thing is to keep birds dry.” If the chickens get wet, they are more susceptible to getting sick or dying. The cause of death is not always related to environmental conditions, though. Sometimes a bird’s health is compromised before being transported, and that can be hard to spot during loading.

Dr. Crowe also pointed out that there is so much we don’t know about how different factors affect each other, such as: length of transport, type and age of chicken, temperature, moisture, and even the air velocity can play a role in the birds’ experiences and welfare.

He worked with a research team at the University of Saskatchewan to design and develop an experimental trailer that allowed the assessment of environmental conditions such as supplemental heat and active ventilation within poultry transport vehicles. Research results showed that while increased ventilation during cold conditions resulted in lower temperatures for the birds, the birds remained dry and were able to be transported safely.

What about laws and monitoring?

The section of the Health of Animals Regulations that pertains to the transportation of animals includes standards that are either infrequently enforced or are impossible to meet unless allowing some stress and suffering to occur. The Canadian Food Inspection Agency (CFIA), the governing body responsible for enforcing these regulations, views a certain amount of suffering as acceptable. Only once a threshold is reached will it trigger an investigation by the CFIA.

This is especially relevant to chickens. It is considered normal and acceptable for a certain number of chickens to die or become injured in transport. How many will depend on how tightly the chickens are loaded into the transport container, the size of the vehicle and environmental conditions.

The most effective legislation would require third-party monitoring of the number of injuries and deaths occurring in transport to ensure the number does not exceed set thresholds — third-parties are outside agencies with no affiliation to the farm, catching crew or transporter. Penalties could be issued to catchers and transport companies when thresholds are exceeded.

Dr. Crowe suggests that an incentive (reward-based) system could be successful in encouraging workers to follow their humane handling and transport training and avoid taking shortcuts at the birds’ expense. Incentives could include monetary bonuses when no injuries or deaths occur.