Hope in homes: creating pet-friendly housing in B.C. - BC SPCA

It’s a warm, bright summer afternoon at a residential building in Vancouver’s Downtown East Side as a handful of tenants congregate in their private courtyard.

Though the sun is still high in the sky, there’s another bright spot here: in the middle of this courtyard is a pen with a litter of German Shepherd cross puppies. Most have jet black fur, while a few sport patches of white or brown along their coat. Two are lying down; only moments ago they were teaming up to empty out a water bowl with their tiny pink tongues. The rest of them tug at a tattered toy panda. 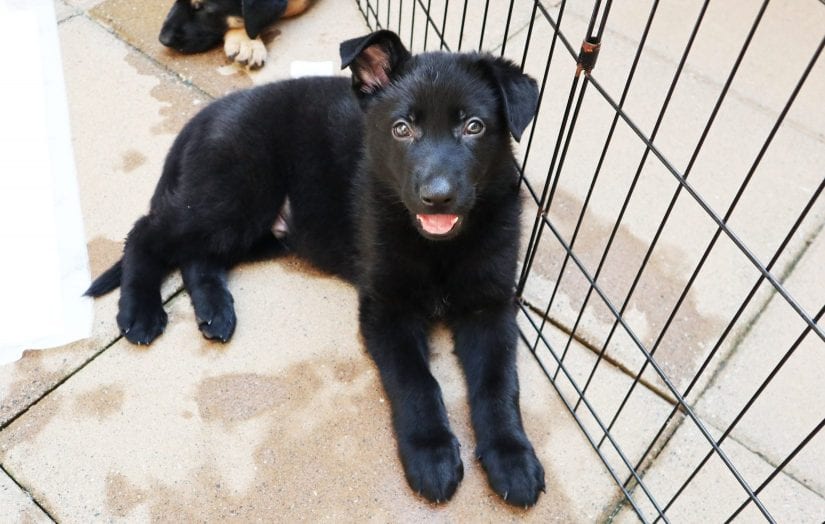 Sitting a few feet away are their foster parents, chatting with neighbours. The discussion goes from progress on the vegetables in the building’s community garden, to how fast the pups are growing.

“Leo’s face looks like it’s changed since this morning,” says resident Riannon Cathcart, marveling over one of the puppies she’s fostering. Everyone makes their own observations. A couple of the pups’ floppy ears are starting to stand up.

Cathcart nods at the puppies and smiles. “It won’t be long until all of them have ears sticking straight up.”

Moments later, another resident, Hailey Kathler, brings down a kitten on a leash. She’s fostering him. “His name is Cheeseball,” she says, proudly. Cheeseball lets out a little mew as she puts him down on the table. At first he seems shy; there are a half a dozen people fawning over the wee creature. Then, as if to steal the limelight away from the puppies, he tries to bite at his collar, then starts to chase something invisible on the table. Everyone laughs. Kathler is smitten. “He really is a ‘cheese ball.’”

For some, such moments seem like a distant dream as Metro Vancouver watches pet-friendly housing options disappear before their eyes. It’s not hard to find would-be tenants disappointed in seeing the words “no pets” on a rental application.

“This was the only place we looked at that would allow dogs over a certain weight limit,” says Cathcart. “Everything was less than 20 pounds. Our wiener dog was 15 pounds, so that was no big deal, but for people with other dogs who can’t find anything, it’s tough.”

BC SPCA’s senior officer, digital & direct response, Charly Jarrett – who also lives in the building – says it did take some work to get the building to be more pet-friendly.

“The first year I moved in, there was high turnover. People never stayed more than a couple of months. When we had our annual general meeting, there was this big issue about keeping tenants. So I said, ‘hey…full disclosure, I’m from the BC SPCA, but did you know that people with pets stay twice as long? They’re willing to pay 20 per cent more in rent? Plus, there’s this massive pet-friendly housing crisis in B.C.’ Everyone was like, ‘oh! Wow!’”

Even though the building was labelled as pet-friendly, Jarrett says there was inconsistency. Each suite is individually owned, so some landlords would choose to reject prospective renters based on the fact they had an animal.

“Owners, individually, had concerns. None of the landlords were making it pet-friendly. I offered to join the strata, and then we came up with our own bylaws.”

To do that, Jarrett says she used the BC SPCA’s online tool kit, which includes easy-to-follow guides for creating pet resumes, myth-debunking information for those who manage or own a rental property, and guides for people on strata councils looking to establish pet policies (PDF).

“All I pretty much had to do was copy and paste,” she says of the process. “Obviously we had to work to implement the changes, but the bylaws are easy to follow. Mandatory spay and neuter, for instance, which tends to take care of a few of the animal issues. Nothing had to be breed-specific or size-specific. You are also required to register your animal with the city so we can keep track of them, that way if there are any issues the city knows which animal it is.”

Jarrett says they made sure there were penalties for those who didn’t play by the rules. “For the people who don’t choose to spay or neuter, they’re considered to be breaking a bylaw, so then they’d get a maximum fine.” 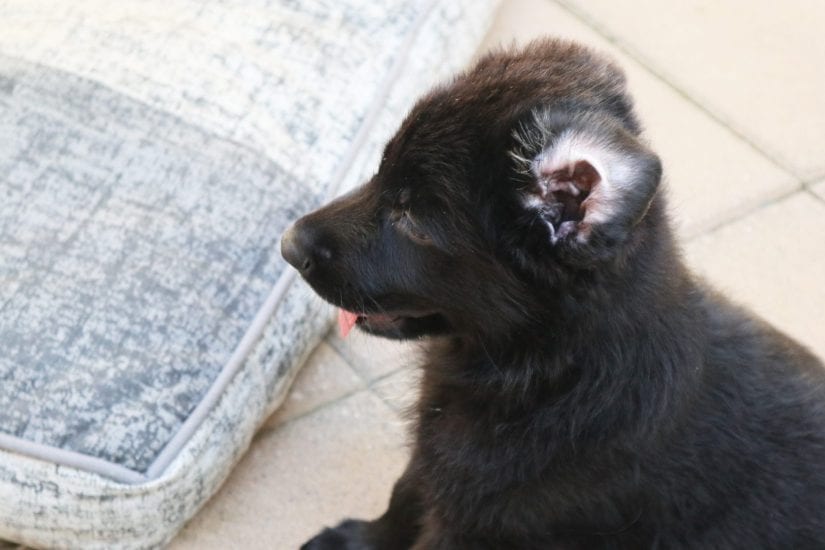 “And obviously we have common sense rules, like ‘don’t [let your animal] pee on whatever [they want],’ ‘clean it up [if they poop], don’t just leave it there,’” says Cathcart. “Knock on wood, you know, that no one is going to complain about the puppies, but everyone’s been so great.”

The positive impacts continue to show in spades. Cathcart says the puppies have inspired more community events in the building.

“There are a lot of people I’ve met that I probably wouldn’t have met otherwise. They come outside to pet the puppies when they’re playing in the courtyard. We actually had a barbecue a little while ago that only happened because everyone was coming down to meet the puppies. That was fun.”

“It’s such a little oasis in here,” says resident Sierra, who is fostering three of the German Shepherd cross puppies, “yesterday my sister was over, the puppies were here, my door was open and eight different people came by asking to borrow stuff, or even just to ask how things were going, coming in to check in on us and we’d all be talking. It’s easy to just leave your door open here and never feel alone.”

Kathler, now holding on to Cheeseball, agrees. “It gets easier to remember people because some residents will say, ‘oh her? Yes, she had the puppies!’” Kathler previously fostered three orphaned kittens, and is guardian to a cat named Leo. “I’m really happy I have my Leo because I live alone, and it’s nice to have someone – well, even though he’s not a person, it’s great to have him there.”

She also says they’ve been happy to foster knowing they’re lending a helping hand to the BC SPCA. “My cat is really an ‘only cat’ – so this gives me a chance to help out and see a lot of different animals, but not worry about my cat being upset, or have him feeling like I’ve abandoned him.”

For those looking for pet-friendly housing, Jarrett says making small changes like her building did will have a big impact on the community. “I hope people know that there are tools there that they can use to try and make their spaces more pet-friendly. It can be done. Yes, it takes time, but if people do the research and actively campaign for the changes, it can be done.” 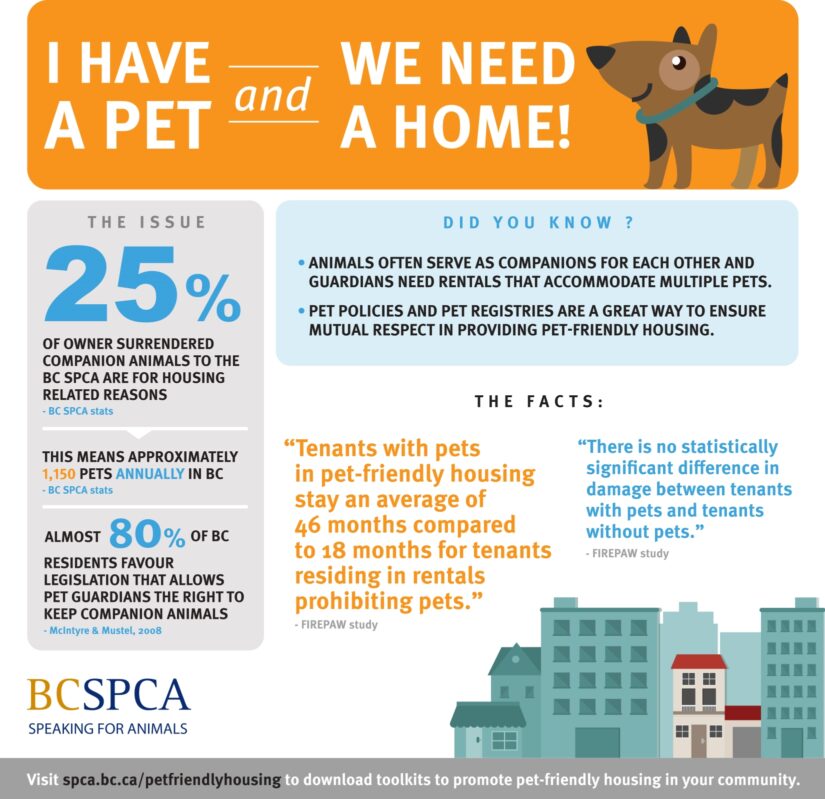