BC SPCA and Humane Canada work together

BC SPCA staff actively participate in the governance and leadership of Humane Canada by advancing welfare issues, including: 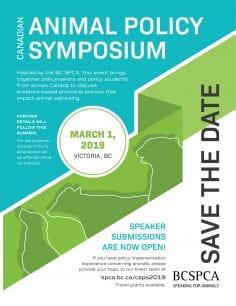 On March 1, 2019, the BC SPCA hosts its first Canadian Animal Policy Symposium in Victoria, B.C. This event brings together policymakers and policy students from across Canada to discuss the development of evidence-based, innovative provincial policies that impact animal well-being.

On behalf of Humane Canada, the BC SPCA recruits and manages the animal welfare and cruelty experts who participate in negotiations to improve federal Codes of Practice for the welfare of farm animals. The Codes are considered ‘generally accepted practices‘ for farm animal care. Explained differently, they represent the minimum animal care requirements for animals raised on farms. There are Codes for beef and dairy cattle, veal calves, laying hens, meat chickens, turkeys, meat rabbits, pigs, mink, foxes, sheep, horses, goats, farmed deer and bison.

The BC SPCA also serves on the Canadian General Standards Board (CGSB) Committee on Organic Agriculture. As a member of the CGSB committee, the BC SPCA presses for improved animal welfare requirements in the Canadian Organic Standards, which lay out generally accepted practices for farm animal care on organic farms.

Help for animals in research

The BC SPCA works closely with the Canadian Society for Humane Science, a national advocacy organization, to promote alternatives to animal use. BC SPCA staff also serve on the board and national committees of the Canadian Council on Animal Care (CCAC), and give input into assessments of institutions using animals.

The CCAC is a national organization that sets welfare standards for animals used in laboratories for product testing and scientific research.

To aid prosecutors, the BC SPCA and Humane Canada initiated the creation of the National Centre for the Prosecution of Animal Cruelty (NCPAC).

The BC SPCA plays a lead role in training crown prosecutors, police, judges and other cruelty officers through the National Centre for the Prosecution of Animal Cruelty training conferences coordinated by Humane Canada.

BC SPCA animal welfare experts,  participate in the creation and updates of these national codes.