The B.C. Farm Industry Review Board has awarded custody of 13 serval cats to the BC SPCA. BC SPCA animal protection officers seized these exotic animals from breeders near Kamloops in June after the cats were found living in horrific conditions. After months of specialized care, the servals will not be returned to their former owners. Instead, these wild animals will be transferred to accredited sanctuaries to live out their wild lives.

Unfortunately, there is a chance that this could happen again. The breeding and possession of servals remains legal in B.C. but it doesn’t have to be this way. The B.C. government could add the serval to the Controlled Alien Species (CAS) list, which would make the importation, breeding, sale, display and private possession of servals illegal – just the same as tigers, lions, leopards and other wild cats.

Want to take action? Ask the Ministry to add serval cats to the CAS list and be protected by the Wildlife Act’s Controlled Alien Species Regulation. Email the Director, Wildlife and Habitat at FishandWildlife@gov.bc.ca.

The BC SPCA has seized 10 adult serval cats and three serval kittens in distress from a breeder in Little Fort, outside of Kamloops, B.C. The exotic cats were found in horrific living conditions by SPCA constables.

“Serval cats are wild African cats who require extensive space to run and a highly enriched environment to express natural play and hunting behaviours. They are carnivores and require a very specialized diet to meet their physical needs, including proper bone development” says Marcie Moriarty, chief prevention and enforcement officer for the BC SPCA. “The idea of these beautiful wild animals being confined in captivity is disturbing enough, but in this case, the animals were kept indoors in substandard conditions, without access to the outdoors or exercise.” 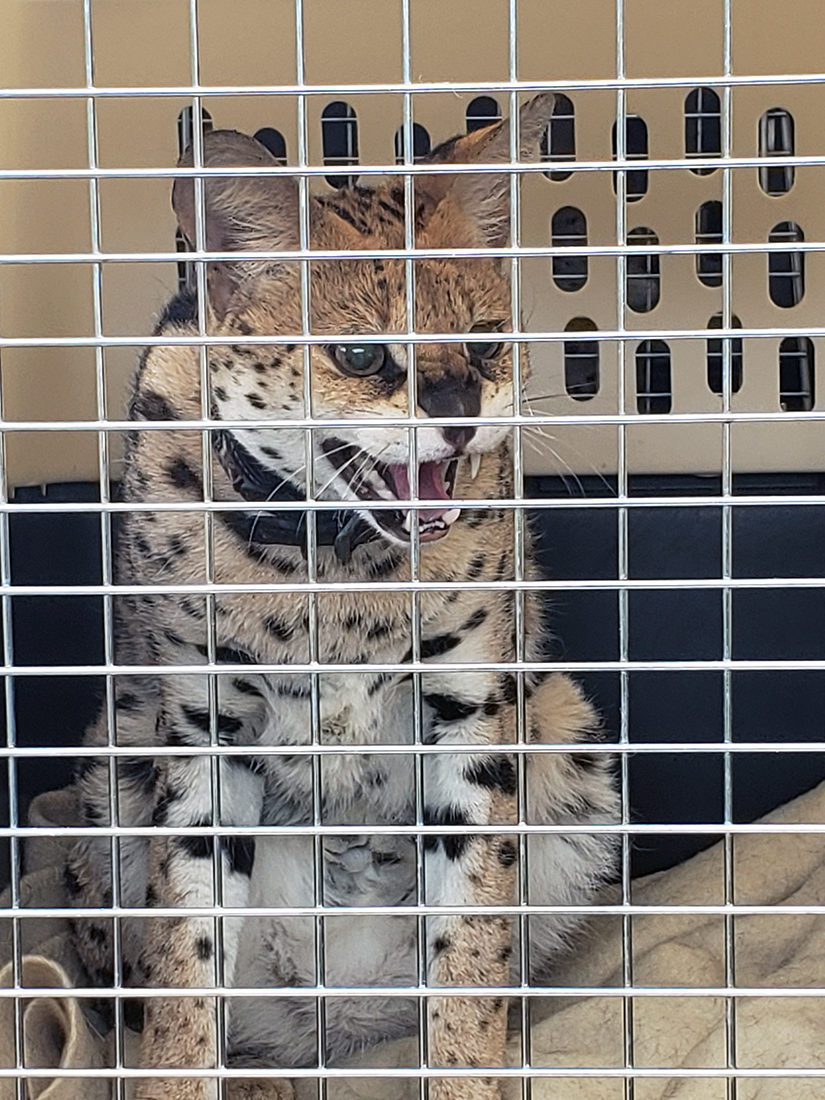 The BC SPCA was alerted to the breeder after receiving complaints of sick and injured animals being sold. Most of the servals were being kept in RV trailers on the property, exposed to high levels of ammonia from urine, with litter boxes overflowing with feces, without proper ventilation or access to water, high temperatures and windows covered so they had no natural light.

The animals were removed with the assistance of a conservation officer and are being cared for at an undisclosed location.

“This is a case we see commonly with substandard breeders, where they have a very attractive website and people are unaware of how distressing the actual living conditions are for the animals. All interactions are online and buyers never visit the property,” says Moriarty. “Unfortunately, there are certain people who are drawn to the attention they receive by owning an exotic animal, but it is so distressing to see these beautiful wild animals suffering because of people’s desire to have a novelty pet and the breeders who profit from it.”

Moriarty notes that serval cats are not included in the provincial Controlled Alien Species legislation, meaning their breeding is unregulated.

In addition to the 13 serval cats and kittens, the SPCA seized two dogs and one domestic cat in distress from the property.

The BC SPCA investigation continues and charges of animal cruelty will be recommended in the case.

Subscribe to the BC SPCA’s WildSense bi-monthly e-newsletter to learn more  about issues regarding wild and exotic animals in B.C.