The BC SPCA is applauding the quick actions of Ministry of Environment staff in applying the province’s new regulations on exotic animals to travelling circuses. 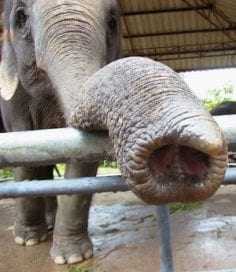 Officials from the Jordan World Circus, which toured 14 B.C. communities in July and August, were denied a permit to include three Asian elephants in their performances after failing to meet public safety requirements.

The new regulations, which were championed by the BC SPCA and adopted in 2009, enable the Ministry of Environment to manage the breeding, trafficking and keeping of all dangerous exotic species in B.C.

“In this case, the Jordan World Circus entered B.C. without the two permits required under the new regulations to transport and display exotic wild animals,” said Sara Dubois, the BC SPCA’s manager of wildlife services.  “We advised the ministry on July 20 that the Jordan World Circus was travelling through the province with exotic animals, including three adult Asian elephants. The ministry immediately contacted circus officials to advise them they would have to apply for a permit.”

The circus was allowed to continue displaying the animals while their permit application was being reviewed but on July 29, after ministry officials denied the application, the elephants were pulled from the two final stops of the tour.  Dubois notes that the permit was denied because Jordan officials did not have a plan in place to protect the public in the event that the elephants got loose during a performance.

“The fact that the ministry is serious about enforcing the new regulations sends a strong message to circuses that use wild exotic animals in their performances,” says Dubois.  “Word will spread quickly and organizers of these kinds of events won’t be able to plead ignorance of the new legislation.” She adds that in the future circuses will have to apply for permits at least two months in advance if they want to enter B.C. with exotic animals.

“The BC SPCA is hoping the new permitting system will act as a deterrent for the use of exotic animals in entertainment in B.C.,” she said.  The non-profit animal welfare society opposes the use of animals in entertainment because of concerns about how the animals are trained, transported, housed and forced to carry out acts during performances which are contrary to their natural behaviours.

Dubois notes that the BC SPCA will be asking the ministry to review the regulations to examine why black bears, which were included in the Jordan World Circus acts, are exempt under the Wildlife Act from the same public display conditions as exotic animals governed by the Controlled Alien Species regulation.  “We believe this needs further review and we’re confident that the ministry will take a second look to ensure that bears are protected along with other wildlife.”

Photo caption: An Asian elephant (above) is shown for illustrative purposes. This is not one of the elephants removed from the Jordan World Circus events. Credit: Greg George, Creative Commons.