Senior Himalayan cats find a home for the holidays - BC SPCA

Who can forget their beautiful, grumpy faces? At the end of April, 12 senior Himalayan cats were brought to the Sea to Sky animal centre. Some of the cats were emaciated; they all had skin infections because of the severe matting of their fur. The cats were also battling fleas, ear mites and dental issues including broken and missing teeth. 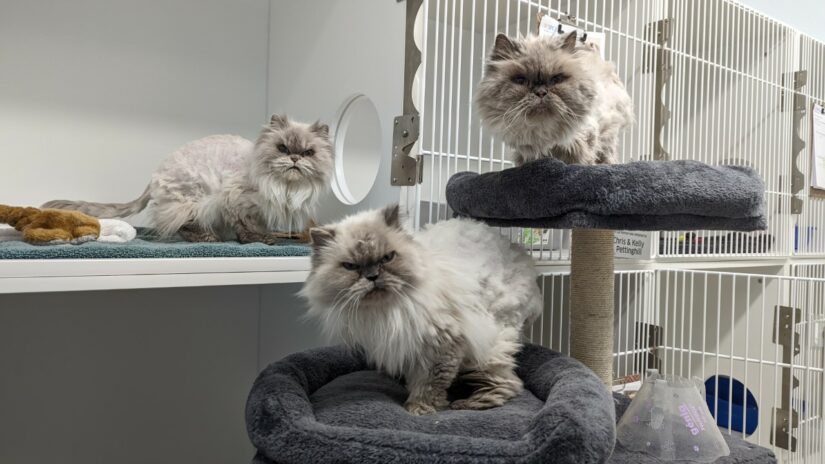 “It was quite the scene when they came in,” says Krista Larson, manager, BC SPCA’s Sea to Sky animal centre. “We all fell madly in love with them. Many were bonded and would need to find forever homes that would be willing to adopt them together.”

One senior Himalayan cat named Ursula was bonded, but it wasn’t to one of the other 12 rescued cats, it was to a feral three-year-old black cat named Alaric, now named Ozzy, who she met at the centre. 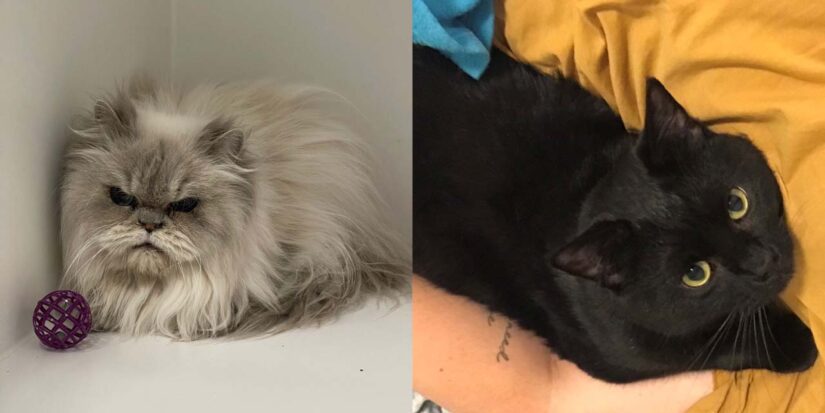 “She loves him, and he dotes on her” says Larson. “Whenever she made a peep he would come running to make sure she was okay.”

When Layla came into the animal centre, she wasn’t looking to adopt a “May-December” bonded pair of cats. “I didn’t know anything about the Himalayan cats that had been rescued. I was looking for a young cat to keep my three-year-old cat Dixie company,” says Layla. “But when I came into the room Ursula was in, she wouldn’t stop meowing at me with her lovely, grumpy face.”

One of the centre’s volunteers was playing with Ozzy, who was typically very nervous around people, but came right up to Layla. “They told me how bonded Ursula and Ozzy were, so I wanted to keep them together.”

Layla adds that the team at the centre recommended that she foster them temporarily to see if the cats would get along. After a month, she officially adopted them.

“They are the most perfect additions to my home,” says Layla. “Ursula is the grumpy old lady who rules the house.” Ozzy was super snuggly right from the start, but it took Ursula a little longer to feel comfortable. “Now as soon as I sit down both cats jump onto my lap.”

The romance that started at the animal centre has blossomed in their new home. “They are like an old married couple,” says Layla. “They are joined at the hip.”

Dixie gets along with the new additions to the family, but she finds Ozzy’s desire to play constantly a little annoying. “She has been teaching him that she will play, but on her terms,” says Layla.

Layla is looking forward to her first holidays with the three of them and spoiling her fur babies. “I needed them as much as they needed a home,” says Layla.

Ted knew he wanted two of the Himalayan senior cats as soon as he saw their story in the news. “I immediately called the animal centre and told them I was interested in adopting a pair.”

He knew what it took to take care of them because he had been a “pawrent” to two Himalayan cats in the past. When Mutu, who had been shaved because of her matted fur, saw Ted, she patted him on top of his head. “I knew right then and there that Mutu was coming home with me.”

Ted adds that when he met the mascot of the centre, Tulip, who at eight-years-old was the youngster of the group, he had his pair. 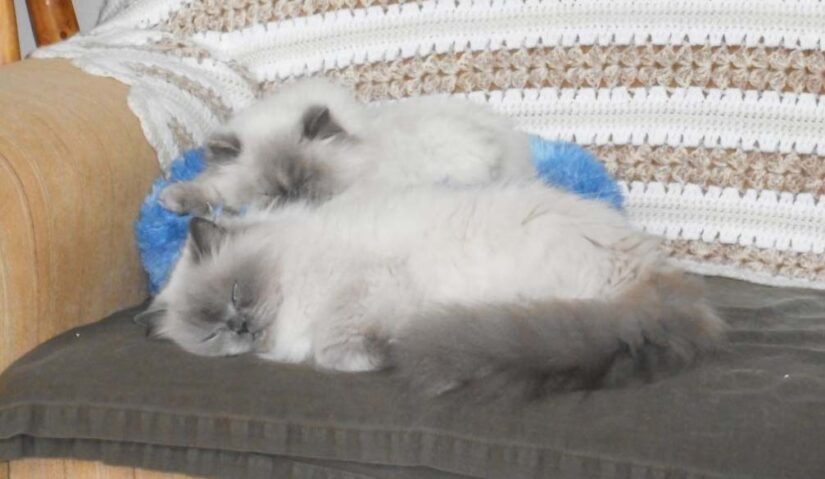 Mutu has gained weight (she is four and a half pounds now) and her fur grew back beautifully. “She is the bossy one,” says Ted. Mutu and Tulip are very bonded and sleep in his chair at night snuggled up together. “I have a turtle as well,” says Ted. “Tulip will stare at the turtle’s tank for hours. She wakes me up in the morning to let me know I need to turn on the light in the tank.”

Mutu loves being held. Ted can scoop her up on his chest and she will snuggle right under his chin. “Tulip can only handle about three strokes and then she takes off, she has had enough.”

Ted is ready for the holidays. He has stockings ready to hang on the hearth for Mutu and Tulip that he is going to fill with treats. “Mutu and Tulip are such great cats. I am so glad they picked me. I just want to make them as happy as possible.”