Remembering the animals who served in war - BC SPCA

Tens of thousands of dogs, horses, and other animals have served Canada and the Canadian Armed Forces during times of war, assisting with everything from transporting equipment and supplies to carrying messages to saving troops under fire.

Some of these animals are honoured at the Animals in War Dedication, a monument located in Ottawa’s Confederation Park, where people can learn more about their heroic stories.

Another way war animals are celebrated is through receipt of the Dickin Medal. Presented by the People’s Dispensary for Sick Animals (PDSA), a U.K.-based veterinary charity, the medal is named after the organization’s founder, Maria Dickin.

Since it was first awarded in 1943, the Dickin Medal, also known as the “Victoria Cross for animals,” is the highest honour an animal can receive for military service.

The medal, which continues to be awarded today, has been bestowed to more than 70 animals around the world, including four extraordinary animals who have earned the respectable honour for their service to the Canadian Army. 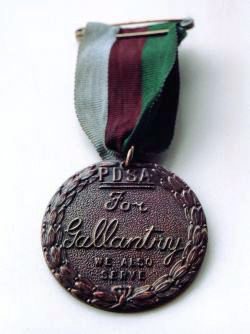 Beachcomber the pigeon, as nicknamed by the troops, was designated with the important task of delivering a key message from Canadians at Dieppe in 1942. The carrier pigeon successfully flew across English Channel under hazardous conditions to safely deliver the news about the Canadians landing to higher commands in England. He was awarded with the Dickin Medal in 1944 for bravery.

A Newfoundland dog named Sergeant Gander was raised by the Hayden family on the airport base in Gander, Newfoundland. He was soon given to the Royal Rifles of Canada and served as a beloved mascot for the regiment. In 1941 the troops, along with Sergeant Gander, were dispatched to Hong Kong. On two occasions, Sergeant Gander was successful in preventing the enemy’s advance and helped to protect wounded men. On a third occasions when the Canadians were under attack, Sergeant Gander picked up a tossed grenade and ran away with it in effort to save his troops. Unfortunately, it detonated and he was killed. However, his death spared the lives of seven soldiers.

He was awarded a posthumous Dickin Medal on October 27, 2000, becoming the first recipient of the medal since 1949.

In 1998, Sam, a German Shepherd, originally from the British Royal Army Veterinary Corps (RAVC), was put on assignment with The Royal Canadian Regiment (RCR) to help create stability and peace in Yugoslavia.

While serving the RCR, his RAVC handler, Sergeant Iain Carnegie, witnessed Sam perform two acts of bravery within days of each other. In one instance, the dog charged at a gunman who opened fire and helped bring him to the ground, allowing him to be disarmed by Sgt. Carnegie.

In another instance Sam and Sgt Carnegie were forced to create a barricade to protect a group of civilians who had taken refuge in a warehouse from a group of rioters. The two stood their ground, protecting the civilians, until reinforcements arrived.

In 2000, Sam passed away from natural causes at the age of 10. Two years later, in 2002, Sgt Carnegie accepted a posthumous Dickin Medal on Sam’s behalf.

In 2014, the Dickin Medal was awarded posthumously to a First World War-era thoroughbred horse named Warrior for serving Canada nearly a century earlier.

Known as “the horse the Germans couldn’t kill,” Warrior led the charge for the Canadian Calvary Brigade at several battles during WWI, including the Battle of Moreuil Wood, a crucial attack that helped paved the path to the final days of war.

Despite everything he endured, Warrior survived the First World War and was shipped back to the Isle of Wight in the U.K. where he was born and lived a full life until he died in 1941 at the age of 32.

Warrior received the first-ever honorary Dickin Medal to all animals who served in the First World War, and was specifically recognized for the strength and resilience that all animals possess for their war efforts.