Harold, the severely injured dog found on a rural back road near Squamish, has rebounded in a big way, thanks in large part to the community’s – and the entire country’s – generosity. A tiny dachshund mix, Harold was turned in to the BC SPCA’s Squamish Valley Branch in rough shape, with horrible bruises and injuries that resulted in two surgeries. Now healthy and happy, this lively guy will likely be heading to a loving home as early as next week. His care costs were more than covered by the generosity of the residents of the District of Squamish as well as donations from people across B.C. and Canada through the BC SPCA website.To date, $6,290 has been raised for Harold and animals like him in need of care at the Squamish Valley SPCA.

“We’ve been blown away by the public’s kindness and generosity,” says BC SPCA Squamish Valley branch manager Marika Donnelly. “We are so grateful to everyone who gave and to everyone who contacted us about giving Harold a forever home. He’s doing absolutely amazing!”

The BC SPCA also wishes to thank Eagleview Vet Hospital staff, who performed the surgeries at a discount and gave Harold the round-the-clock care he required. 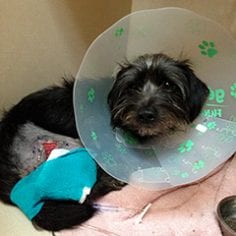 He was found on a rural back road, just outside Squamish District boundaries, horribly bruised, injured and neglected. Since arriving at the BC SPCA Squamish Valley Branch, Harold, a wee, wire-haired dachshund mix, has been responding incredibly well to his surgeries. But this brave little guy still needs care and a lot of love to get well, and branch staff are hoping the public can help.

While it’s not clear what caused Harold’s injuries, possible burns and blunt-force trauma are suspected, as he had damaged skin and major bruising all over his ribcage and abdomen. The injuries were at least a few weeks old and, even if accidental, Harold was not brought to the vet for necessary treatment. The damaged skin on his hind end and inner right leg had gone necrotic and was horribly infected, says Squamish Valley Branch manager Marika Donnelly. “Emergency surgery was necessary to remove the dead tissue, which was damaged severely down to muscle,” she says. “It’s been a long haul for him but three surgeries later, he’s doing absolutely incredible. When he first came to us, he was weak, lethargic and couldn’t even walk, but a few days after the first surgery, he was up and happy.”

The infection Harold had would have killed him had the BC SPCA not received him when they did, she adds. The SPCA is investigating the person or people responsible for Harold’s condition – anyone with information about the case is asked to please call the BC SPCA Animal Helpline at 1-855-622-7722.

Harold is receiving round-the-clock care at Eagleview Vet Hospital but could be ready for adoption soon, as his recovery is going well.

“He’s about a year-and-a-half old and very sweet – such a fighter and super spunky,” Donnelly says.

Even though the veterinary hospital has given the BC SPCA a huge discount, Harold still needs about $2,000 to pay for the surgery and care he requires. If you can help Harold and other animals like him in need of care at the Squamish Valley SPCA, please call 604-898-9890, donate in person at 39901 Government Rd., or donate to the Squamish Valley Branch online.

Watch the Global BC news report.
Warning: graphic photo below.