He was found with a collar so deeply embedded, he couldn’t put weight on his 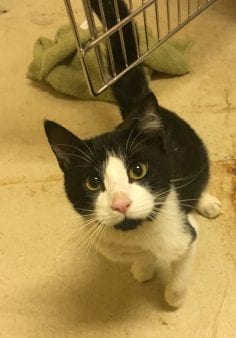 front leg. Toby, a handsome one-year-old cat at the Prince Rupert SPCA, had a collar that was stuck around his neck and under one of his front legs, causing severe infection and tissue damage to the area.

“The metal part of the collar was deeply embedded in his arm pit, which was extremely infected,” says BC SPCA Prince Rupert Branch manager Amy Stacey, noting that the infected tissue had to be removed during the surgery to remove his collar.

“Toby was so brave! Despite the massive pain he must have been in, he’s been nothing but friendly and affectionate.”

Toby was rushed to the veterinarian for immediate medical attention. His situation could have been prevented with the use of a breakaway collar, Stacey notes, a type of collar for cats that unfastens when something pulls on it with force. 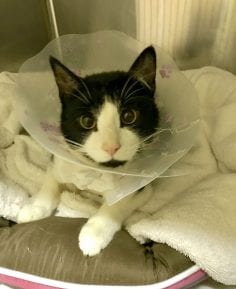 collar stuck, indoors and out, whether on a tree branch or fence or other obstacle,” Stacey says.

A non-profit organization, the BC SPCA relies on public donations to carry out its life-saving work in helping the province’s most vulnerable animals. The medical costs associated with Toby’s care are expected to exceed $1,400.