A young female river otter pup was recently found crying and wandering a beach in the Victoria area. Fortunately, a kind member of the public witnessed this distressing scene and recognized something was wrong. They quickly got in touch with staff at BC SPCA’s Wild Animal Rehabilitation Centre (Wild ARC) and together it was determined the otter pup was in need of immediate care.

“On arrival the otter was dehydrated and emaciated, weighting in at just 1.1 kilograms,” says Andrea Wallace, manager, wild animal welfare. “It is likely that she was a late-season baby, and for an unknown reason, became separated from her mother.” 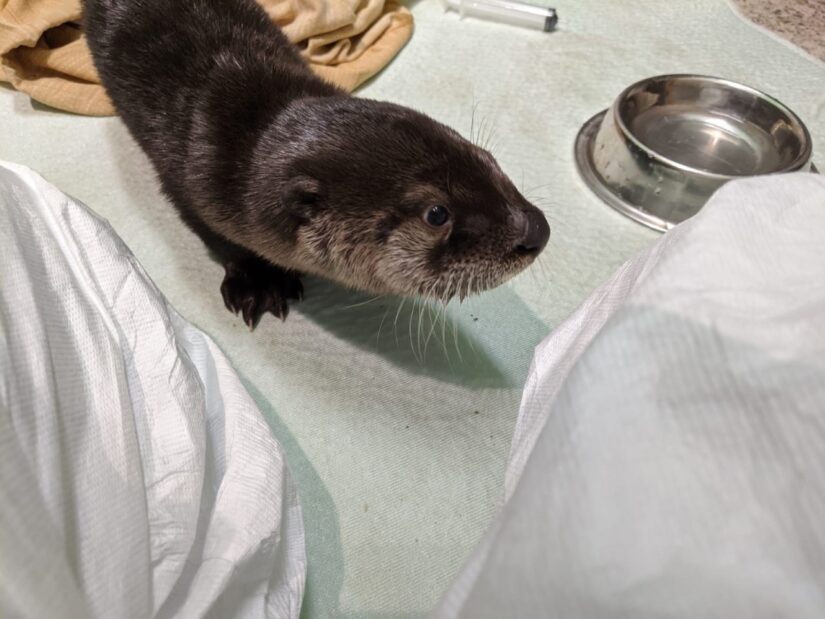 While Wallace says there was initially concern that the pup experienced some trauma to her back legs as she seemed unsteady, after multiple tests and x-rays it was determined that there weren’t any injuries but instead was very weak from being malnourished and underweight.

At this time the pup is too small to be introduced to the other orphaned otter in care at Wild ARC who was brought into the centre in June after her mother was killed by a car. “Our rehabilitation team is currently focused on bringing her strength back and her weight up,” says Wallace. “However, once the pup feels like herself again, our staff will closely monitor an introduction between the two to ensure a successful relationship.”

Both otters will remain in care at Wild ARC through to the spring when they will be old enough and ready for a second chance at life in the wild.

“The cost for raising one otter was generously donated by so many of our supporters and we thank you all for your financial assistance,” says Wallace after a medical emergency fund for the first orphaned otter exceeded the initial goal. “The cost for food, formula, regular fluid therapy, pool changes and medical care is significant and we would really appreciate your partnership.”

Fortunately, this is a happy ending to an otherwise tragic story. The young otter might have a long road to freedom ahead of her, but as Wallace says, “She’s in good hands now!”