Marigold and Clover love being loved in their forever home! - BC SPCA

Marigold and Clover arrived at the Victoria BC SPCA shelter close to a year ago, after they were found living loose on a property. They had never been inside a home and were not socialized. They were afraid of human touch and did not want to wear a leash or a harness – they just wanted to be left alone.

“Everyone at the shelter fell in love with Marigold and Clover, but because they hadn’t been socialized, we knew it was going to take a lot of work to get them ready to be adopted,” says Blaze Fullbrook, of the Victoria BC SPCA. “We used desensitization and counter conditioning which helps dogs learn to trust humans, to help make them comfortable with being touched and wearing a leash.”

Marigold and Clover have found a forever home together! Their new mom says they wake up their dad every morning and push each other out of the way to be the one closest to him so they can get all the attention. 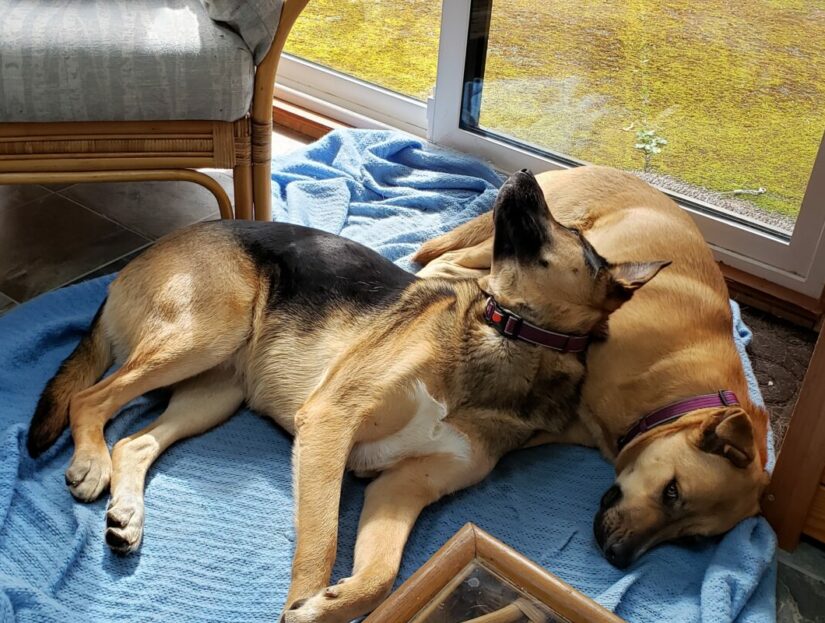 “Marigold and Clover have been in our home for three weeks now,” says Kristin. “We were going to foster them first with a plan to adopt them, but they have settled in so well, we have gone straight to adoption.”

Kristin and her husband had two dogs prior to adopting Marigold and Clover. “Lilo passed away a few years ago and Belle passed away in March – we were going to take a little break, but when I saw these two girls and read that they had been in the shelter for more than ten months, I said we had to at least try to see if we might be a fit for them and give them a forever home.”

“Kristin and her husband came in every day for two weeks to sit with Marigold and Clover to make sure the girls were comfortable with them,” says Fullbrook. “The whole family was committed to them. Her parents came by to meet them because they would be taking care of them if Kristin and Darren went away and couldn’t take the dogs with them.”

When Marigold and Clover started to wag their tails every time they heard Kristin and Darren’s voice in the shelter, everyone was excited that this was going to be a match.

“We fell in love with them,” says Kristin. “We were so happy when we could see that they were warming up to us and it looked like we were going to be able to bring them home.”

Kristin says that the dogs were a little nervous when they first arrived, but she and her husband have tried to calm any of their fears by spending lots of time bonding with them.  “I work from home and get to spend much of the day with them, sometimes laying on the floor with them during meetings.  My husband spends lots of time with them at night and first thing in the morning before he heads into work.”

One of the most interesting things about the changes Kristin has seen in Marigold and Clover since they have been in their home is the fact that attention is now the biggest reward for them, more than treats.

Marigold and Clover have also gotten accustomed to indoor living. “They will come to me in the middle of the night if they need to go out for a bathroom break,” says Kristin. “They have also figured out how to be let in and out of the house. They don’t bark, they simply stand at the door and wait for us.”

The two girls are getting along with the family’s cat Elliott who was a feral kitten “raised” by Lilo and Belle. “They are so good with him,” says Kristin. “Just the other day Elliott was laying between the two of them, poking them to see if he could get a rise out of them. Marigold got up and walked away and Clover just laid there.”

These sweet girls have come a long way, but there is still work to be done. “We are working on getting them to come when they are called,” says Kristin. “And they haven’t gotten over their dislike of being on a leash or wearing a harness, so we are working on that as well.”

Kristin says that Marigold and Clover have made their house feel like a home again. “We are just so happy that they are a part of our family. They are just the sweetest dogs.”

Marigold and Clover’s journey to a forever home

Marigold, an Anatolian shepherd mix and Clover, a German shepherd mix, were found living loose on a property. They had never been inside a home and were not socialized.

When they first arrived at the Victoria BC SPCA more than three months ago, Marigold and Clover were hand-shy and untouchable. “They are still quite new to being touched and Clover in particular is still getting comfortable being pet on her back,” says Blaze Fullbrook, shelter attendant – animal behaviour, Victoria BC SPCA. “Marigold tolerates petting on her back, neck, chest, and around her ears. We used desensitization and counter conditioning to pair treats with the approach of hands and eventually with touch so that they associate the yummy treat with hands approaching them.” 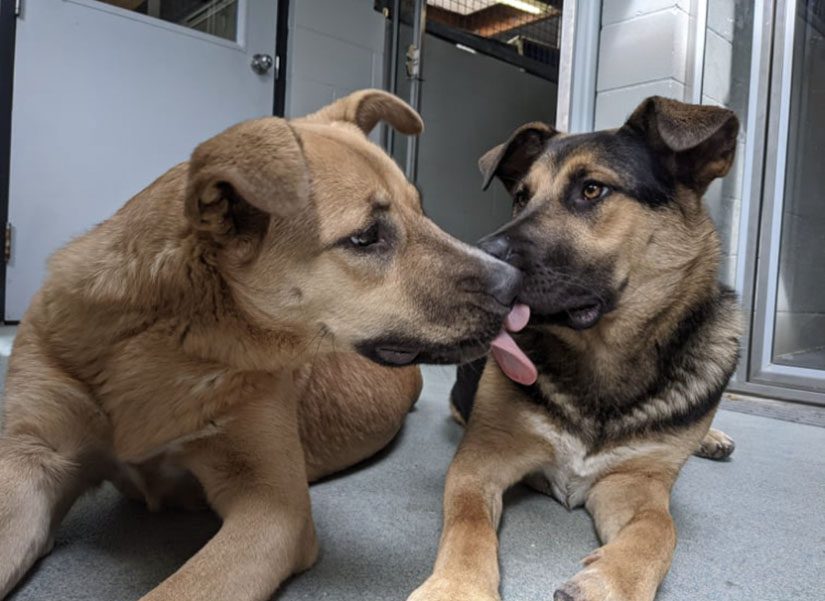 Desensitization and counter-conditioning is a type of training that involves finding a level of the trigger a dog can tolerate and repeatedly pairing exposure with something positive like treats, play or attention.

“When dogs grow up isolated from people, it can be a challenge to get them comfortable living in a typical home environment,” says Karen van Haaften, BC SPCA’s senior manager, behaviour and welfare. “Under-socialized dogs often require a lot of time, and slow, careful rewards-based training to help them build trust with people and become comfortable with everyday experiences such as handling, leash walks, and car rides.”

These girls have been in the care of the BC SPCA for over three months now, which is a relatively long time for dogs to be in a shelter. “Special needs dogs may need longer shelter stays to get them ready for adoption,” says Fullbrook. 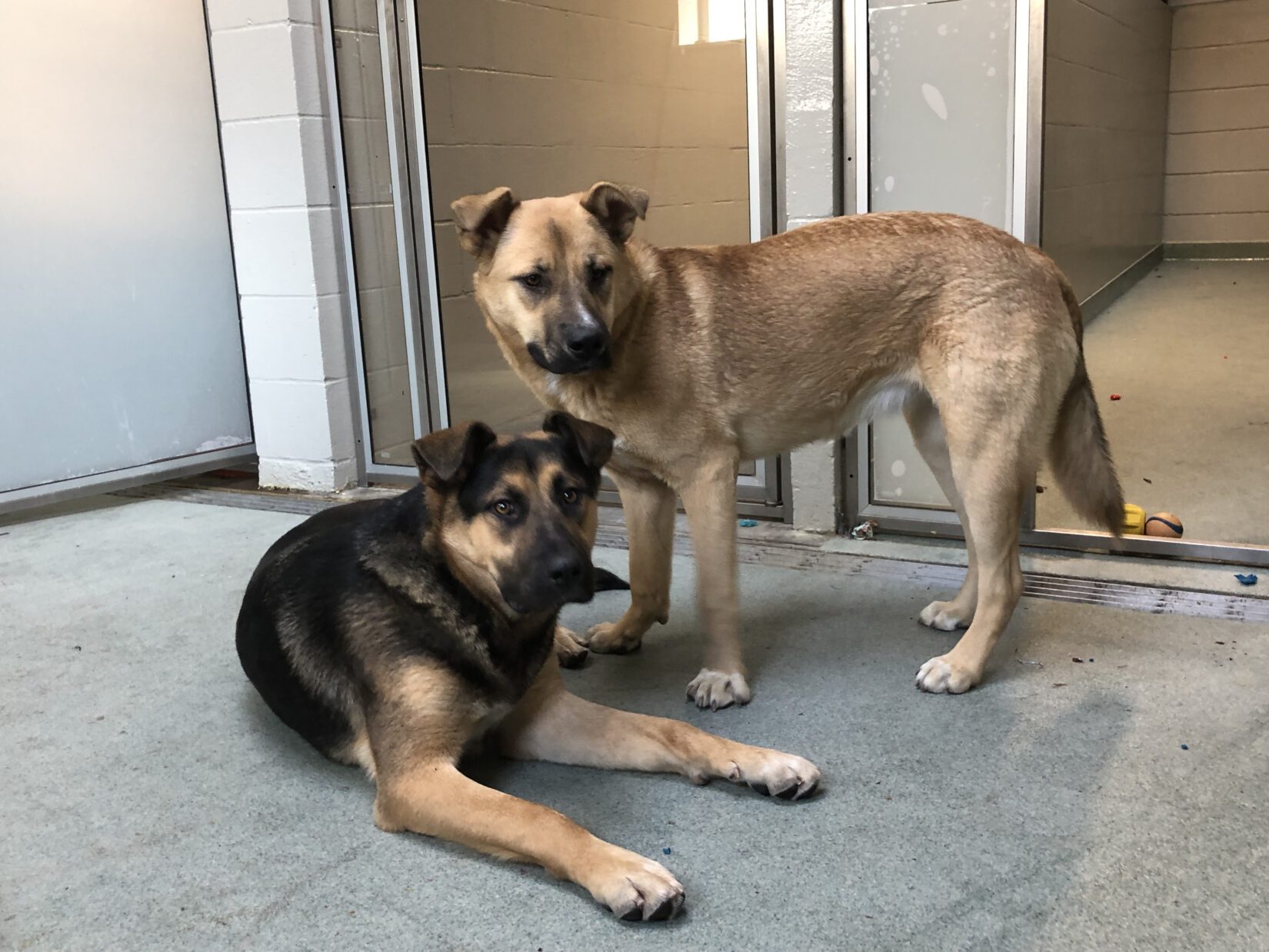 They are making it as easy as possible for Marigold and Clover by housing them in a separate wing of the shelter so they aren’t exposed to barking. The dogs have a strict routine and schedule to give them structure. An enrichment program provides them with daily novelty and a variety of volunteers interact with Marigold and Clover to help them get used to people with different physical characteristics.

“Marigold and Clover have come so far,” says Larissa Johnston, assistant manager, Victoria BC SPCA. “We can totally see their potential.”

They are working on getting the girls accustomed to playing by introducing them to toys, which are new to Marigold and Clover. “We leave toys in the kennel for the dogs to explore at their own pace,” says Fullbrook. “Eventually Clover started to chew on toys and then engage in play with Marigold.”

Fullbrook says that shortly after that Marigold also started playing with toys when she was alone. Their favorite game is to play in the gym and Clover plays ‘keep away’ with the toys, making Marigold chase her.

When they are ready for adoption Johnston says they will need a guardian who understands and respects Marigold and Clover’s boundaries. They will need to be patient, gentle and above all kind. The dogs are not used to being around bikes, buses and cars and their forever home will need to expose them to new people, places, and things slowly and to continue positive reinforcement training as they get used to all of the sights and sounds on streets and in homes.