Injured kitten finds her place in the world - BC SPCA

A three-week-old kitten was surrendered to the BC SPCA Abbotsford Branch with a circular cut to her skin exposing the muscle underneath (warning: graphic photo.)

The owners claimed not to know what had happened to this kitten but vet staff thought the cut was very unusual. One of the registered veterinary technicians that worked at the clinic phoned the SPCA cruelty line but the kitten’s owners had provided false information and the SPCA special provincial constables were unable to follow up on the complaint.

The vet staff carefully stapled the tiny kitten’s skin together and wrapped her torso with a compression bandage to hold everything in place. 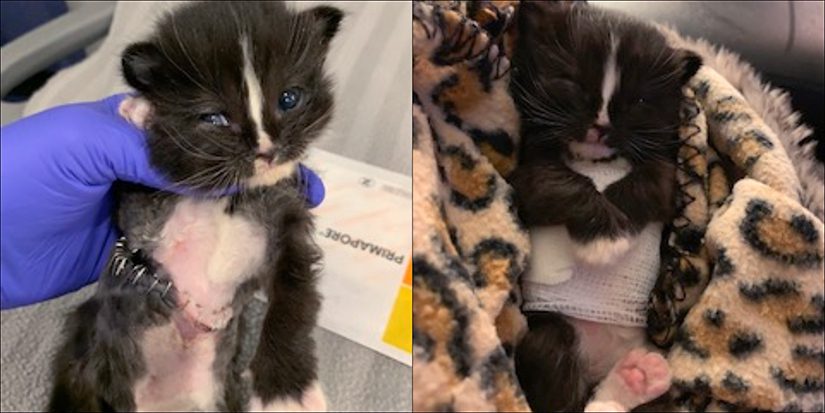 One of the vet techs, Shacara Wasilieff, fostered the kitten for the SPCA. At just three-weeks-old, the kitten, who was now called Frankie, was too young to have left her mother. Wasilieff bottle-fed the kitten every few hours and took her to work every day keeping her in a dog kennel. Frankie’s wound gradually healed. 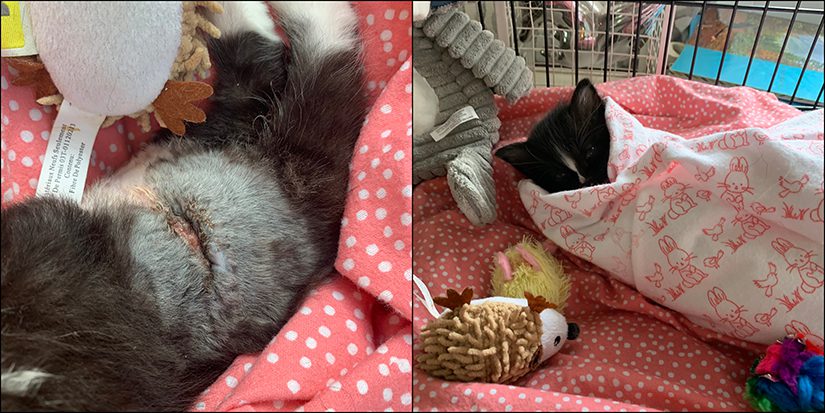 “She’s an independent kitty who will play quietly with her toys,” says Wasilieff. “She’s not needy and doesn’t scream or cry for attention.” 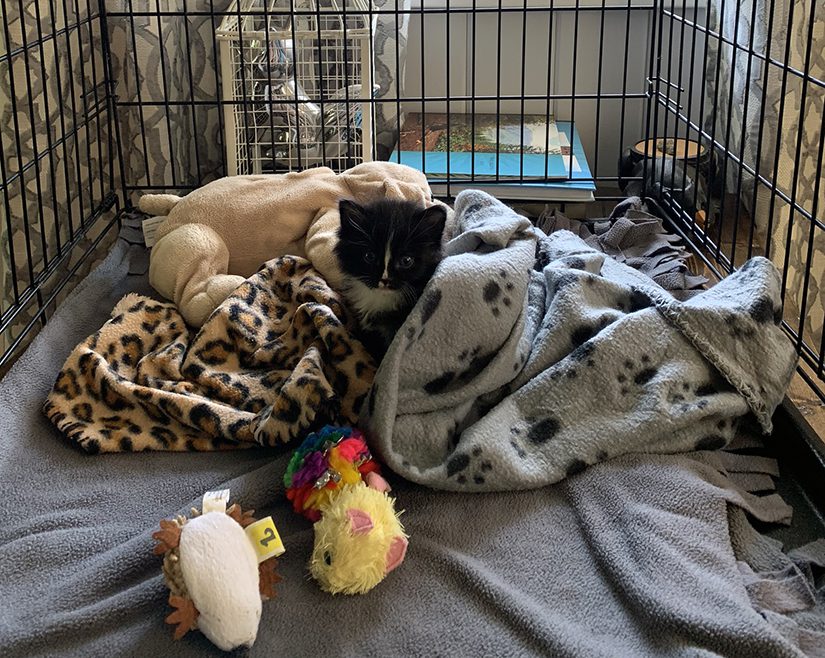 Frankie took much longer to be weaned than the other foster kittens Wasilieff has had in the past but she was litter trained at just four-weeks-old.

Wasilieff already has three cats of her own and two black labs but little Frankie began to tug on her heartstrings. When Frankie was old enough and her wound had healed Wasilieff signed the adoption papers. 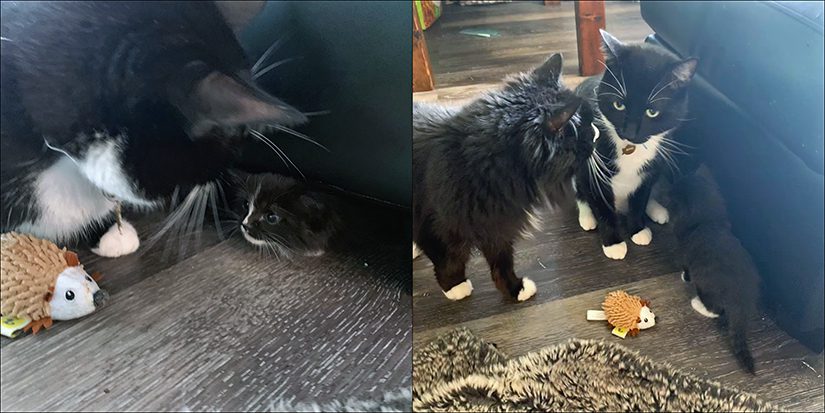 Now, Frankie spends her time playing with the other household pets and loves snuggling up close with her new mom in bed each night.

The BC SPCA relies on the dedication of its foster volunteers to take in injured animals or those that require extra care such as orphaned puppies and kittens.

Learn more about how to become an SPCA foster. 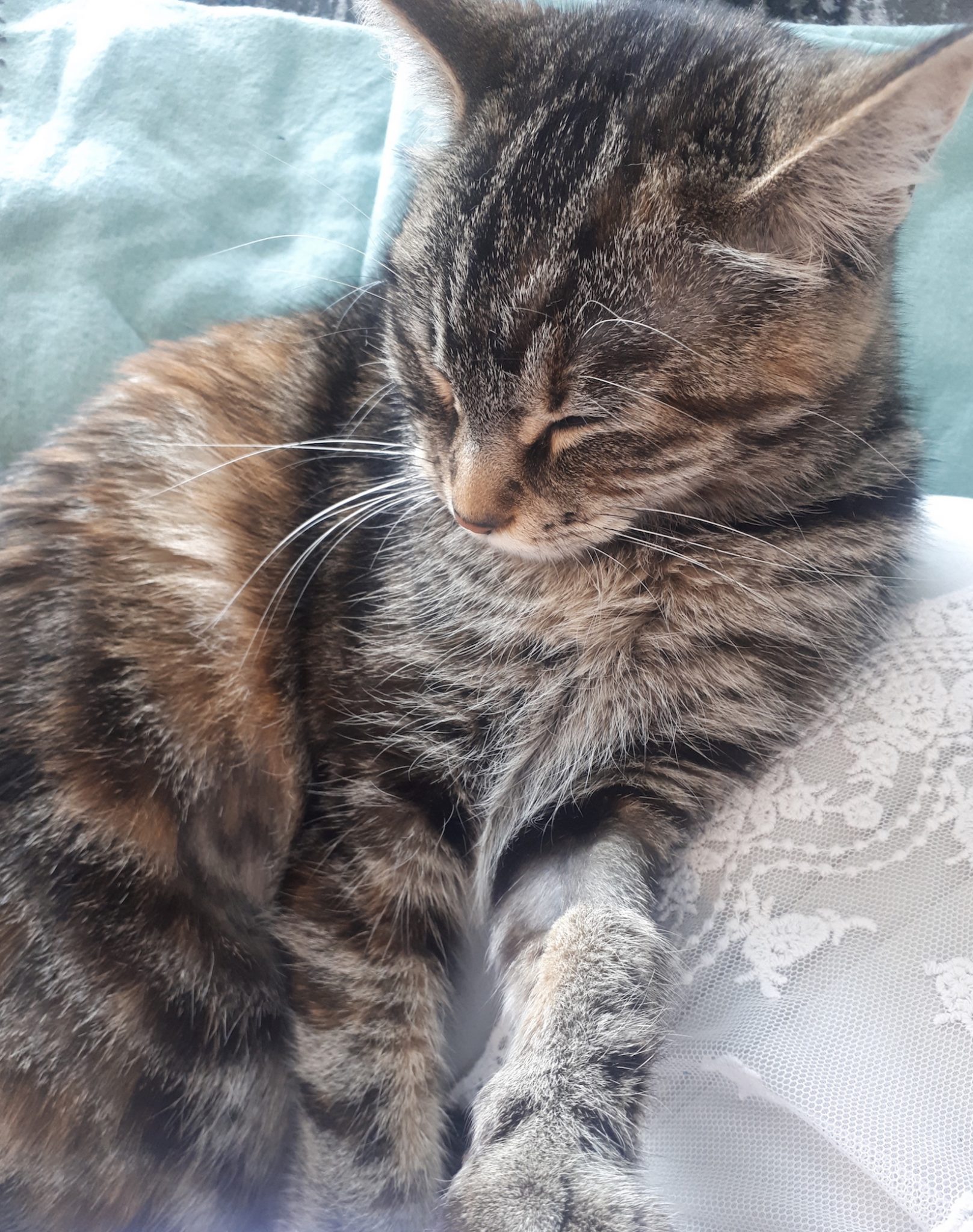 Noodle had a bit of a rocky start when she was first surrendered to the BC SPCA Abbotsford Community Animal Centre in early May 2021. In our interactions with Noodle, we learned that she could become easily over-stimulated when being shown affection. It took a couple weeks of going home with potential guardians before Noodle …