Keep your pets safe from coyotes this summer | BC SPCA

Coyote sightings are common in both rural and urban communities across British Columbia. Just like our pet dogs, coyotes are smart, playful and social. But their role in the ecosystem as scavengers and rodent predators can present dangers for cats and small dogs, who can become part of the coyote’s natural food chain, if they are left outdoors unsupervised.

“Summer is puppy season for coyotes so the mothers will be hunting for food for their young pups and will be extra protective if someone comes near their offspring,” says Lorie Chortyk, general manager of communications for the BC SPCA. “It is so important for cat guardians and guardians of small dogs not to leave their pets outdoors without supervision.”

Coyotes keep communities from being overrun with rodents by eating small mammals like rats, mice, shrews, voles and squirrels. But they will also prey on free-roaming cats, small dogs and chickens if given the chance. “They will also eat garbage, so it is important not to inadvertently draw coyotes into your neighbourhood by providing an easy food source,” says Chortyk.

The BC SPCA advises pet guardians to keep their animals on a leash when outdoors and to pick up pets and small children if they encounter a coyote. “If approached, make noise and appear ‘big’ by stamping your feet and waving your arms to frighten the predator off, but don’t run away, as it could encourage them to give chase. Instead, maintain eye contact and move away slowly,” says Chortyk. 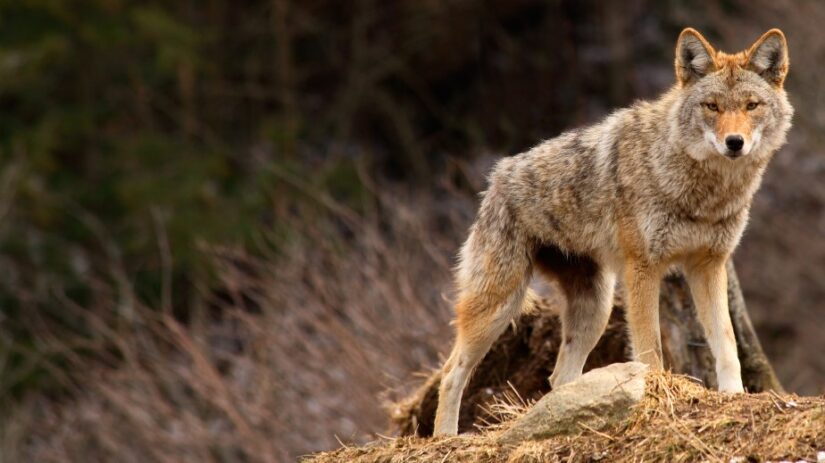 Here are some simple things we can do to avoid conflict with coyotes, and to ensure they don’t lose their natural wariness of humans:

What to know about coyotes

Should I keep my cat indoors?