Coyotes have become common sights in cities, towns and farms across North America. The Lower Mainland is home to an estimated 2,000 to 3,000 urban coyotes, which moved into the area in the 1980s. There are no coyotes on Vancouver Island or the Gulf Islands.

Coyotes are related to wolves, foxes and dogs. Just like our pet dogs, coyotes are smart, social and playful, but they have a bad reputation for killing pets and small animals. This is the same trait that makes them important to our ecosystem, as a scavenger and major rodent predator. Rodents are a big portion of an urban coyote’s diet, making them important agents of natural pest control.

Coyotes are generalists that eat small mammals like rats, mice, shrews, voles, squirrels and rabbits. However, coyotes will also eat garbage, compost, fallen fruit, seeds from bird feeders and pet food. They will also prey on free-roaming cats, small dogs and chickens if given the chance.

Coyotes are not rabies carriers in B.C. but they can get skin diseases that often make them look sick. Young coyotes can get help from professional wildlife rehabilitators when injured or sick.

Coyotes are generally not dangerous to people, but some lose their fear when they are fed and may attack small pets or unattended small children. Often these aggressive individual animals have been regularly fed by someone in the area.

If you see a coyote, scare it away by yelling, stamping your feet and waving your arms. Make lots of noise and try to look big. This may feel silly, but will help the coyote avoid future problems. Teach children how to scare away a coyote if they see one, but never throw anything at the animals.

To protect pets and children:

Slow down for owls 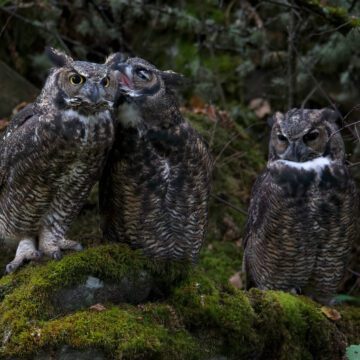 Changing daylight hours can be dangerous for nocturnal hunters, learn how you can help