Ke-Aloha, former fat cat, finds a furever home and a new lease on life - BC SPCA

Diane Rodgers was looking for a long time to find a cat to adopt this year when she finally came upon Ke-Aloha’s picture on the BC SPCA adoption site in July.

“I was charmed by the way she gazed straight into the camera, and there was another picture that showed her lounging on her side and she had her paws stretched out,” she says. “She appeared to be a sociable girl with a story to tell, and I wanted to meet her.”

It didn’t bother Rodgers either that Ke-Aloha, who weighed in just shy of 16 pounds, also happened to be overweight.

“Her weight was not a concern. I’ve had big cats before, most recently a Maine Coon who weighed 17 pounds at a normal size – for him,” she says. “I think Ke-Aloha has some Maine Coon or Norwegian Forest Cat in her with those massive paws. What mattered to me was her character and personality, the same as for the people in my life.” 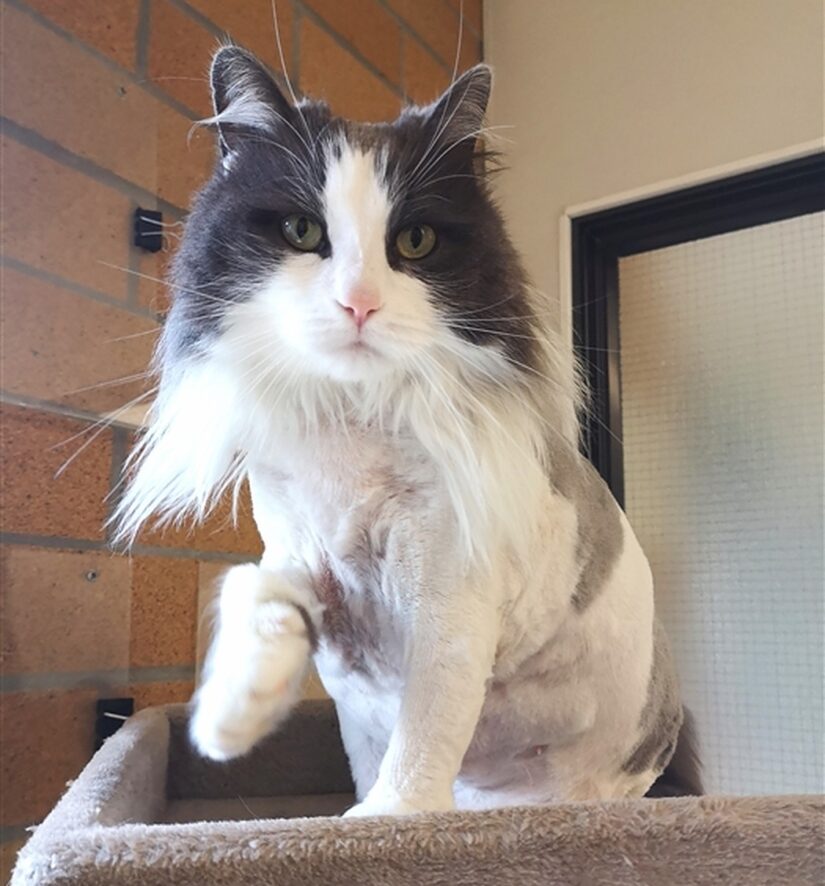 Ke-Aloha was surrendered to the West Vancouver BC SPCA  by her family who felt they were unable to care for her needs. When she arrived to the shelter, Jesse Smith, animal specialist at the West Vancouver Branch, says she was “very matted, and she required a dental exam. We had Ke-Aloha seen by one of our vets and she was given a lion cut, and dental work. Poor diet likely contributed to both her obesity and dental requirements.”

Smith says the branch often sees more obese cats than dogs, which is common. For fat cats, the struggle is real when it comes to losing weight. The Association for Pet Obesity estimates that 60 per cent of cats and 56 per cent of dogs in the U.S. were overweight or obese in 2018. A 2019 University of Guelph study of about 19 million cats revealed that felines are heavier now than they were in the 1990s.

While ‘chonky cats’ might be all the rage on social media, obese or overweight pets are at a greater risk for developing health problems, which can cost thousands of dollars in vet bills to treat. Obesity in dogs and cats is associated with high blood pressure, type 2 diabetes, kidney disease, osteoarthritis, difficulty breathing and an increased risk of getting cancer.

In addition, obese pets have a decreased life expectancy and lower energy levels. They find it difficult to engage in active play and live their lives to the fullest.

Which is why it’s imperative that obese pets are matched with the best guardian who can prioritize taking care of their health and well-being and work diligently with their pets to shed those extra pounds. 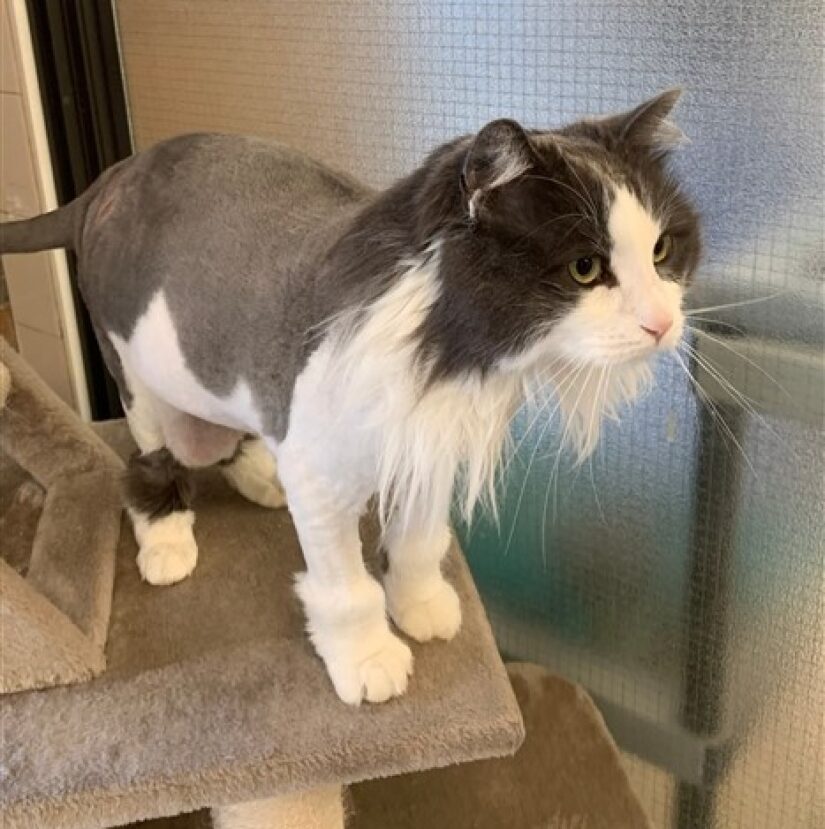 “We always work hard at finding the right home and the best match for all of our animals, including Ke-Aloha,” says Smith. “We asked in her profile for her new family to keep up with her weight loss journey and regular grooming as due to her weight she wasn’t able to keep her coat tangle-free!”

In order to help their new feline keep trim, Smith says staff recommends pet guardians continue with helping their new pet stick to a healthy diet. “Usually obese cats that come in are being free fed a junk food diet, which is why we recommend staying away from any pet food that can be bought in a regular grocery store, and when possible switching over to a metabolic diet like the one offered by Hills,” says Smith. “Getting your pet moving is also important. Low impact exercises like swimming are ideal. Some cats enjoy hydrotherapy in the bathtub too!”

For Ke-Aloha’s weight loss journey, Rodgers says they’re working on toy-play for stretching and exercise. When it comes to food, Rodgers says Ke-Aloha has some anxiety around food, expressing desperation to be fed. However, she says, “That’s diminishing as we keep to a regular schedule of times and amounts for soft food at dinner and treats at bedtime, with an open-bowl policy on the dry food, so she doesn’t need to worry about feeding herself for survival.” 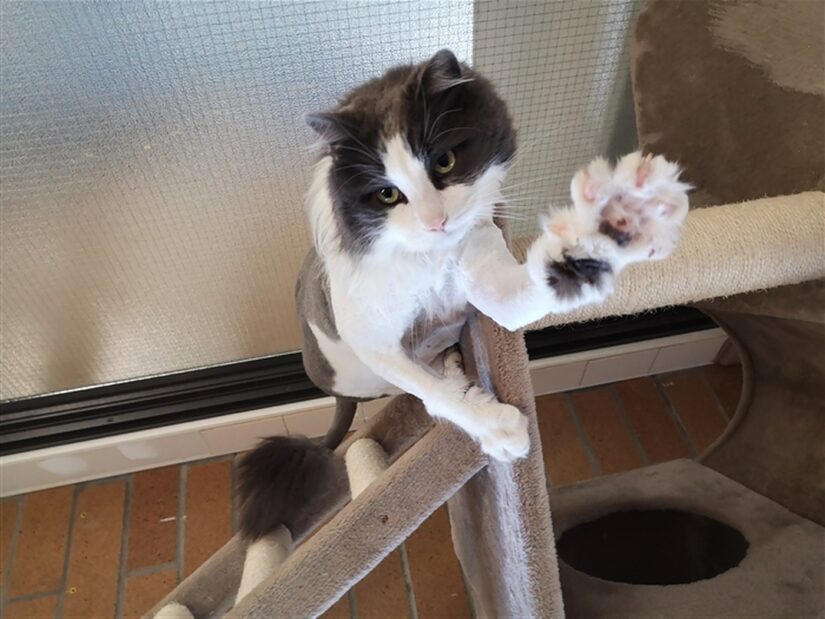 In addition, Rodgers is trying to create “food-like joy” for Ke-Aloha in other ways. “She is starting to like oat grass, which I sometimes pick in clumps to give her the fresh ends, and she gets catnip every few days.”

Already Ke-Aloha has lost several pounds since settling into her new home, and Rodgers says the swag of loose skin on her belly, also known as a ‘primordial pouch,’ is much smaller. Rodgers says she suspects Ke-Aloha’s pouch had expanded to deal with immobility caused by fur mats. With those now removed, Rodgers reports that Ke-Aloha has become “increasingly mobile, jumping onto furniture and window ledges with growing ease, and the pouch is shrinking.”

The more Ke-Aloha moves, says Rodgers, the more calories she burns. “So, I expect her weight to stabilize to a healthy level soon, and hope the food anxiety will diminish at the same time. She is a big-boned girl and doesn’t have much to lose to reach a healthy weight. I’m sure we can get there.”

How to help overweight pets slim down

Will my pet become fat and lazy once he or she is fixed?