Just like the human world, the animal world is filled with amazing moms. They teach, nurture, feed and protect their offspring until they are ready to fend for themselves. In some cases, and I think some moms reading this can relate, the offspring never leave and rely on their mom for food and protection well into their adult life. From the barns to the ocean, this Mother’s Day we celebrate animal moms and their devotion to their young. 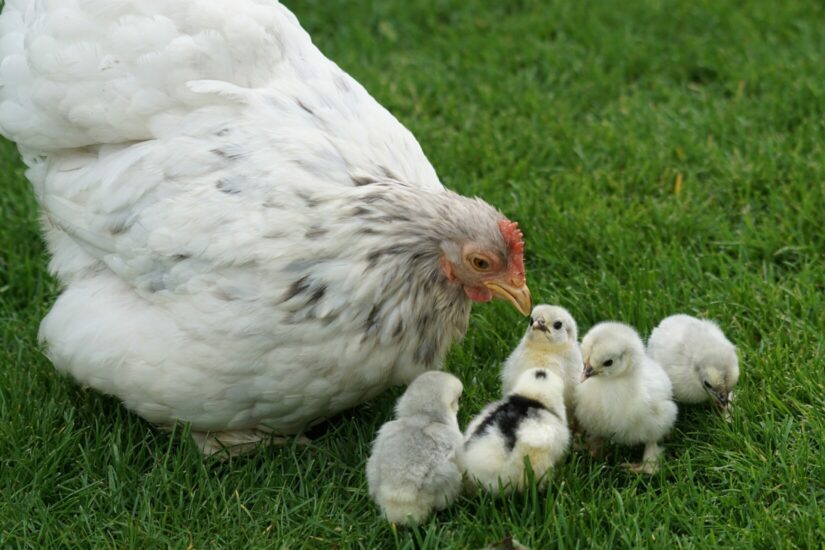 There is a reason why people with overly protective maternal attitudes are called “mother hens”.  From before they are born, mother hens make huge efforts to take care of their chicks. They cluck and purr softly while they sit on their eggs and turn them as many as thirty times a day, so the embryos learn the sound of their cluck and can recognize it when they are born. Mother hens are inseparable from their chicks the first four to eight weeks of their lives and create emotional bonds. She teaches them what is good and not good to eat, how to roost, drink, perch and rest and provides heat and protection every night when they gather beneath her wings until they are eight weeks old when mom leaves them to go back to the coop.

Sea otter moms are known for being devoted to their pups and they have plenty of opportunity to show it. Sea otters have one pup each year well into their senior years and these pups require a lot of care and attention. Sea otter pups are born at sea in the winter and are unable to swim or dive, so mom keeps them safe and dry on her belly for four months. Mom will nurse her pup until they are a few weeks old and then she will begin to share her prey with them, teaching them what is good to eat. Once the pup has learned to swim, mom keeps them close by holding hands with them when they rest or sleep. At between six and eight months the pups are ready to head off on their own.

Raccoon kits are completely dependent on their mom for up to two months. Their eyes and ears are closed for the first three weeks of their lives and they live in a den with their mom who only leaves them to find food so she can produce enough milk. At the two-month mark, mom takes her kits out to learn where to go to find food and other survival skills including how to climb. She is a patient teacher and if she hears one of her kits calling out because they are stuck in a tree, she will climb up and show them how to get down. Interesting fact, when raccoons roll their food in their hands, and sometimes in water, they’re not washing it! Raccoons rely heavily on their sense of touch. Their sensitive paws help them gather more sensory information, and moistening the food heightens the sense even more. Raccoons will leave their mother’s care between eight and twelve months but will often build dens close to them.

Black bear moms are single parents for up to seventeen months. Like many moms in the animal world, they are solely responsible for feeding, grooming, protecting and teaching their cubs. Tiny at birth, newborn cubs weigh between 225 to 330 grams, about the same weight as two chocolate bars. They are the smallest young in comparison to their mother (40 to 80 kilograms) of any other mammal. Not only are they incredibly small, they are also blind and toothless. The cubs nurse all winter long and into the summer. During this time, mom does not eat and relies on the reserves she has built up in her summer and fall feeding. Their reliance on their mother’s milk decreases as they learn foraging skills and by mid-summer they are independent eaters. They den with their mother again for their second winter and then they head out on their own in late spring.

Orcas are super-moms! Their gestation period is between fifteen and eighteen months and their newborn calves rely on their mother’s milk for one to two years before they learn to hunt. The mother’s milk is very thick and rich in fat to help the babies grow and develop a good layer of blubber for warmth. The level of care required means that moms typically only have one calf approximately every five years. They are the only known species in the world where both the female and male offspring stay with their mothers their entire lives. Even when the calves are well into adulthood, orca moms will protect and find food for them. Their devotion to their offspring was never more evident than in 2018 when the world watched Tahlequah, also known as J35, a Southern resident killer whale, carry her dead calf for seventeen days and over 1,600 kilometres. Happily, Tahlequah became a mother again in September 2020.