Imagine a blind kitten with little chance of survival, struggling to persist among a growing group of ailing, malnourished cats. This is how Daeny’s life began. 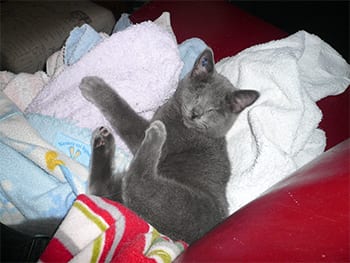 A member of a sick colony on Polkey Road in Duncan, Daeny’s eyes had never fully developed and she faced certain death if kept within the group. Fortunately, Daeny’s story has a happy ending. As a direct result of the BC SPCA Community Animal Spay Neuter Grant, Dee’s Orphan Kitten Fund was able to trap 27 cats from the colony and rescue seven litters, one of which included Daeny.

Now, instead of fighting a daily battle just to stay alive, the playful feline finds joy in the little things, like snuggling with her best friend, the family dog in her new forever home.

Founded in 1996 by Victoria resident Natalie Kroschinsky, Dee’s Orphan Kitten Fund was created when the then-veterinary technician realized efforts were lacking when it came to caring for stray and feral cats. Motivated to help a population in desperate need of it, Kroschinsky put her veterinary background to work, acting on tips from local citizens to trap homeless cats, spay or neuter them, provide medical treatment, and even rehabilitate and rehome those who could thrive with new families.

Twenty years later, she’s still just as dedicated and receives regular referrals from a variety of local animal welfare agencies. She performs all of the trapping herself, ensuring quality, safety, and effectiveness when handling the cats for whom Dee’s Orphan Kitten Fund cares.

Now in her fourth year of receiving the BC SPCA Community Animal Spay Neuter Grant, Kroschinsky is proud of the results she’s been able to accomplish. In Victoria alone, she’s seen an astounding decrease in the number of cats trapped – 30 in 2016 as opposed to a whopping 250 in previous years. Furthermore, the typically busy summer kitten season brought her only four kittens in 2016 – that’s down from the usual 90.

“Since almost all of the cats live in my home for some period of time, this isn’t just a significant drop in overpopulation, but also in the demand for my time,” Kroschinsky says.

The increase in her availability couldn’t come sooner, as she’s discovered that certain misconceptions can often spread, including the myth that cats cannot be spayed or neutered until they are two years of age.

“The grant has helped immensely in not only continuing my work with cats in Victoria, but also expanding my scope to help small communities in surrounding areas who, without the support of the BC SPCA, would not receive any help at all,” Kroschinsky says, “The cats always come first and I never give up.”

This year, Dee’s Orphan Kitten Fund will spay or neuter 80 cats as a result of the BC SPCA Community Animal Spay Neuter Grant.

The BC SPCA relies on donations to continue improving the lives of animals across the province, and the BC SPCA Community Animal Spay Neuter Grant was created to do just this.

Made possible by the generous legacy donations of animal-loving supporters, this grant provides local organizations in communities across B.C. the opportunity to fund their spay and neuter initiatives, creating an ongoing legacy for their cause and happy endings for homeless cats everywhere.

“Pet overpopulation is an issue throughout the province, and it is so rewarding to see how groups like Dee’s Orphan Kitten Fund have embraced the BC SPCA Community Animal Spay Neuter Grant to help tackle the problem,” says Marieke van der Velden, BC SPCA Outreach Coordinator.

“When caring, animal-loving people come together, it’s amazing how quickly we see the results.”