Question: Since he was a puppy my dog spins trying to catch his tail. It was funny at first but now he does it all the time. Why does he do this? 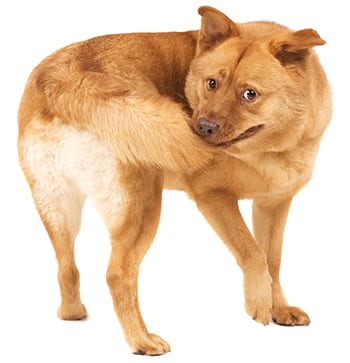 Obsessive tail spinning, light chasing, fly snapping (when there are no flies), foot or flank licking, pica (eating objects such as gravel) are examples of obsessive compulsive disorder (OCD) and affect about two to three per cent of dogs, according to veterinary behaviourist Dr. Karen Overall. When these behaviours consume your dog’s attention they are serious and require intervention by a veterinarian and behaviourist.

According to dog behaviourist Pat Miller, a combination of stress, genetics and early socialization play a role in whether a dog develops OCD. Some breeds are more disposed to developing certain obsessive behaviours. According to Miller, Cavalier King Charles spaniels are prone to fly snapping, shadow and light chasing; while golden and Labrador retrievers are more apt to develop pica. Dobermans are inclined to obsessive licking and grooming; while many herding dogs are more likely to develop tail chasing. There are far more breed tendencies than space allows, but any dog could develop OCD – same as people.

Once established, canine compulsive disorders can destroy your dog’s ability to function normally. OCDs are more likely to develop in dogs who have been housed in a stressful kennel environment such as puppy mill dogs or dogs left in isolation for long periods of time.

Early signs a behaviour could become compulsive is if your dog does some tail-chasing, for example, but continues to exhibit the behaviour while ignoring other enticing activities such as going for a walk or coming for a treat. OCD dogs will repeat a behaviour for hours at a time.

Prevention and intervention include reducing the dog’s stress; participating in games and play (that don’t reinforce the behaviour you are trying to counter); and embarking on a vigorous exercise routine to break the behaviour pattern before it is well established. This could mean, depending on the size, age and breed of the dog, anywhere from one to three hours a day of exercise and stimulating play games. For severe OCD cases, consult a veterinarian about the role of behaviour modification drugs.

For more tips on dog care and behaviour, check out our dog pet care section. Need a dog trainer? Check our tips page, for how to choose a dog trainer.

Want to receive more pet tips like this, right in your inbox? Use the form below to subscribe for updates.