Who can forget Dallas? When her nine newborn puppies urgently needed help, this amazing mom teamed up with a BC SPCA animal protection officer to get them to safety. Dallas, a four-year-old, pit bull cross, came right up to the officer when she appeared on the property and led her 500 feet into dense brush until she got to a bush and waited. Under the bush, the officer discovered the den that Dallas had created and nine, two-week old puppies huddled together.

“Once in BC SPCA care, Dallas and her puppies were given a full check-up by a veterinarian,” says Eileen Drever, senior officer for protection and stakeholder relations for the BC SPCA. “Mom was underweight and put on a feeding program to safely bring her weight back to normal. The puppies were healthy and mom and her litter were sent to a foster home.” 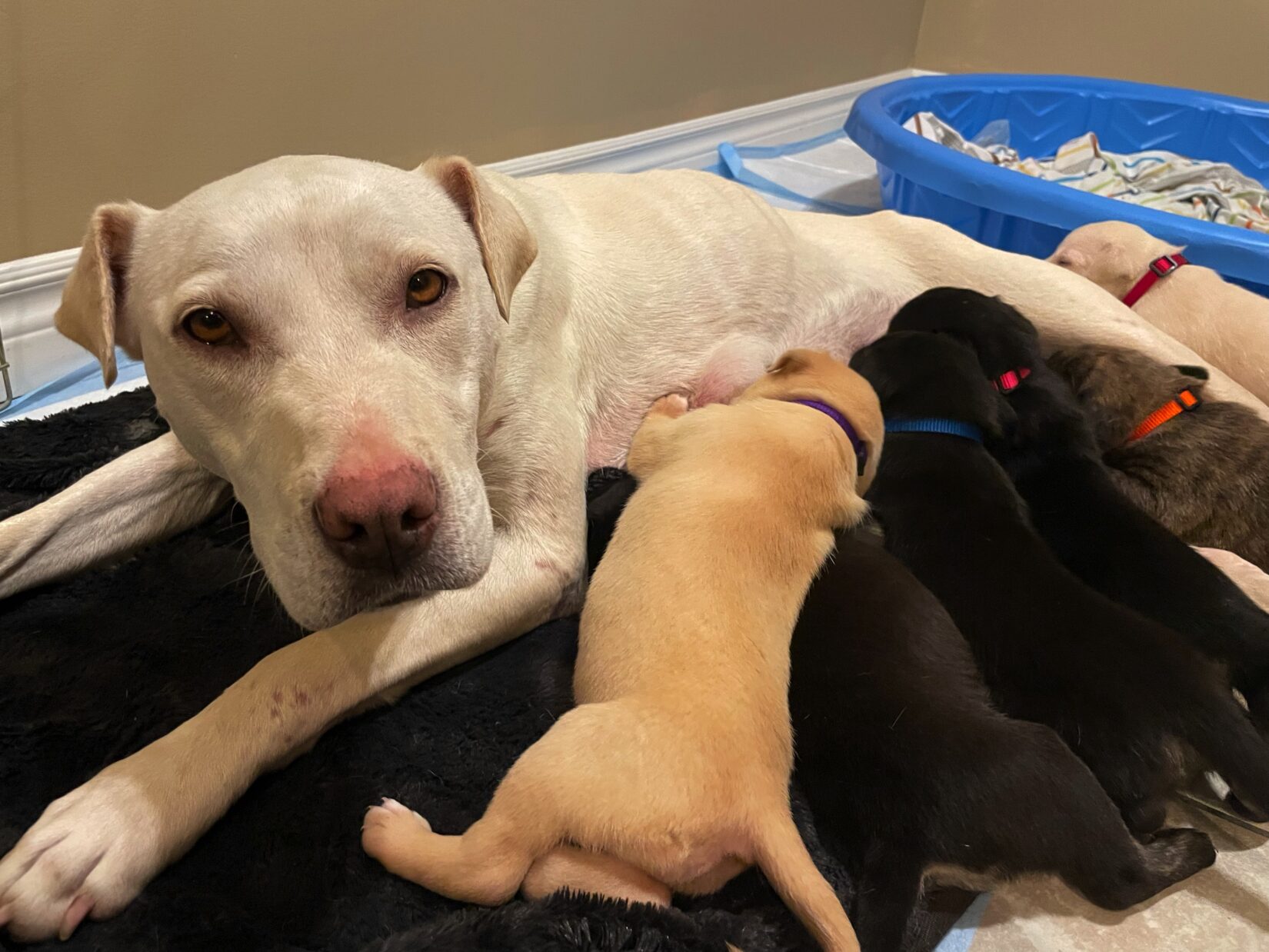 How are they doing now? Dallas’ foster mom is happy to report that Dallas is starting to put on more weight now that she has weaned her puppies. She is also starting to come out of her shell. “Dallas is an amazing mom who is getting a well-deserved rest from her puppies,” says Bernadette. “She is the sweetest dog and is becoming a playful little goofball,” she says. “She loves lots of belly rubs and cuddles and snuggles during nap time.” 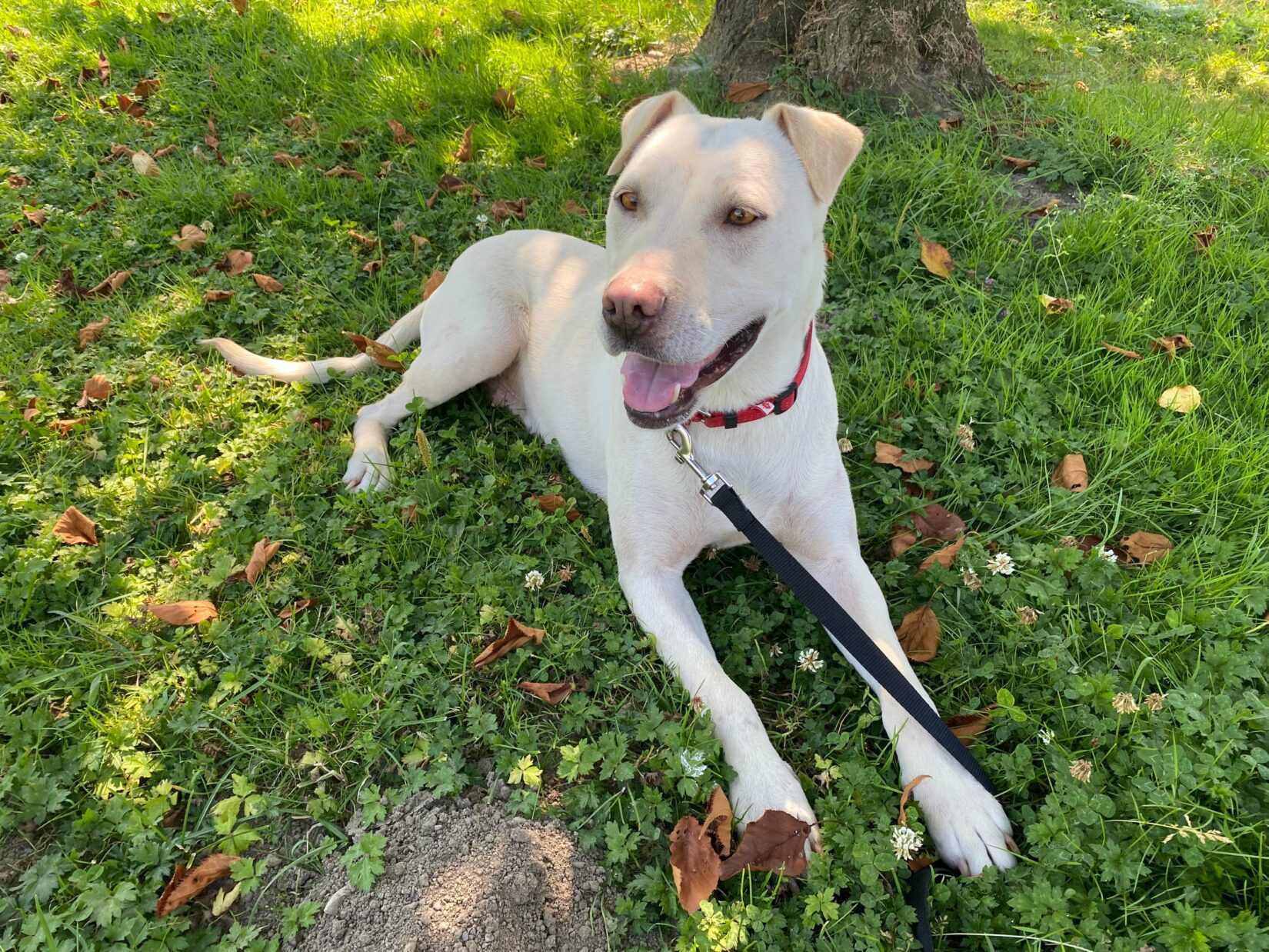 Dallas and her pups were dewormed twice while they were with Bernadette; the type of preventative care they so desperately needed “Even after the first round of deworming and being in our home for a few days we saw an increase in their energy and change in demeanour for the better,” Says Bernadette. 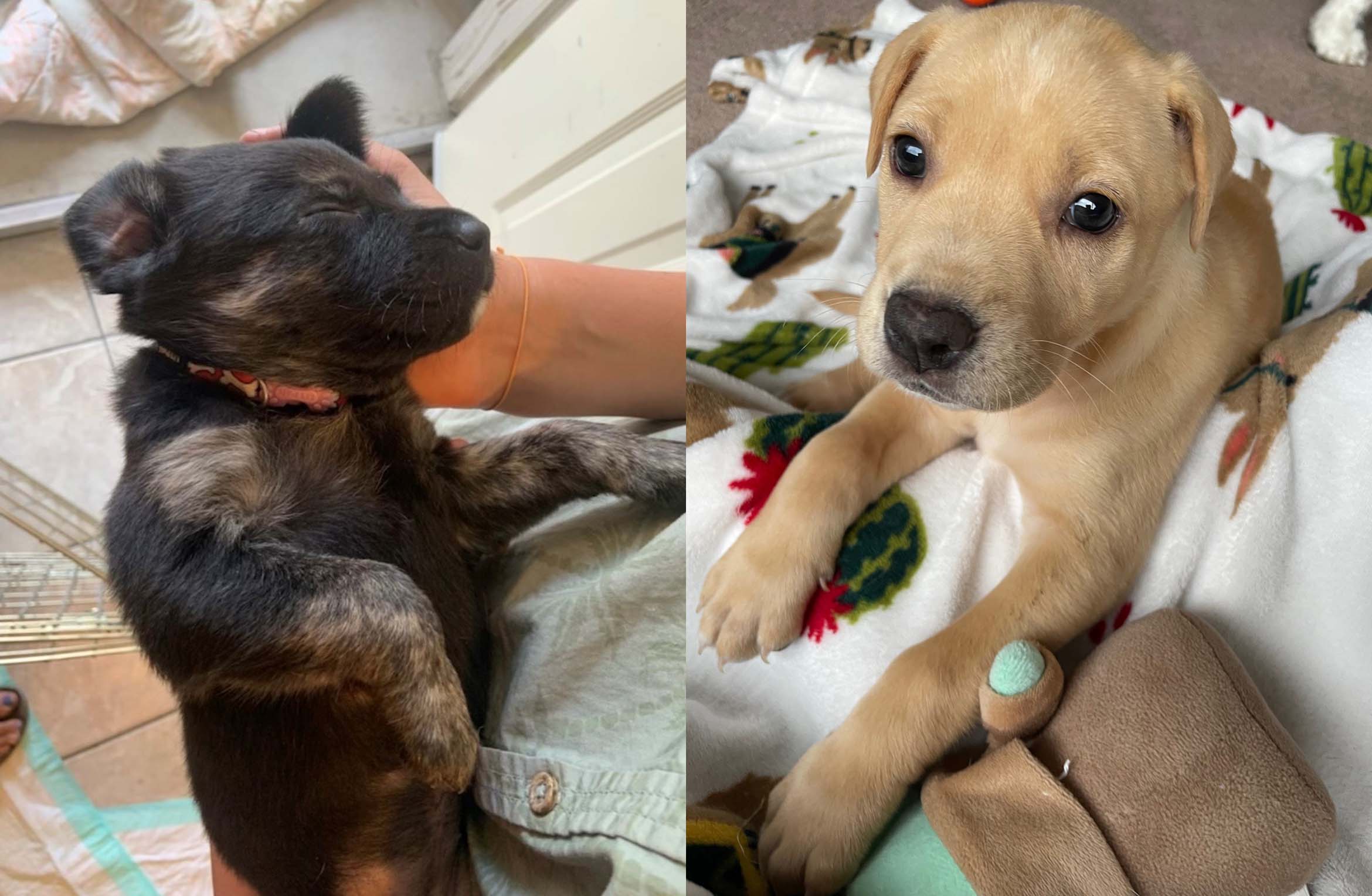 Dallas is learning what living in a house and being taken care of is all about. “Dallas was used to being on the constant lookout for food, but she is learning that she doesn’t need to scavenge in trash to find her next meal.” Bernadette says that Dallas is truly an incredible dog who deserves the best forever home where she can get plenty of cuddles and be spoiled. “Dallas is an affectionate calm cuddle buddy who has no issues around other dogs and loves kids.” 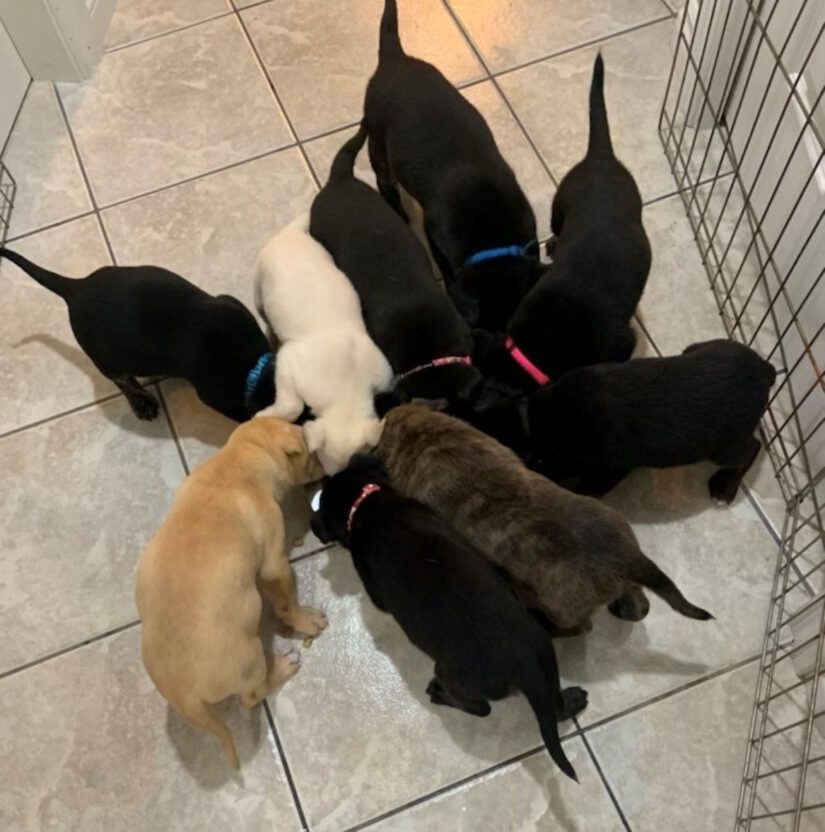 Bernadette says the puppies are super active and eager to explore the world. They are now eating kibble, love playing with their toys and wrestling with one another. “Each pup’s little personality is starting to develop and you can see their little sparks and wonderful temperaments growing,” she says.

“They all enjoy a good snuggle and will make great additions to their adoptive families.”

With such an abundance of cuteness, a naming contest was held for the nine puppies. A big thanks to everyone who entered. The winning names celebrate some of the many varied trees that make up B.C.’s beautiful forests: Cedar, Aspen, Oak, Holly, Douglas (fir), Sitka, Cherry, Juniper, and Maple.

When her nine newborn puppies urgently needed help, new mom Dallas teamed up with a BC SPCA animal protection officer to get them to safety.

“Dallas had been left to fend for herself on a property near Agassiz when she gave birth,” says Eileen Drever, senior officer for protection and stakeholder relations for the BC SPCA. “We received a call about a dog who appeared to have been abandoned and when one of our animal protection officers responded to the call, she was immediately met at the edge of property by Dallas, a four-year-old, pit bull cross, who showed obvious signs of having just given birth.

“She came right up to our officer and led her into the thick brush,” says Drever.

She says Dallas led the officer 500 feet through the dense brush until she stopped at a bush and waited. Under the bush, the officer discovered a den that Dallas had created for her puppies.

“Huddling in the den were nine, two-week-old puppies,” says Drever. “Our officer placed the puppies into a small crate and hiked back out to the road, with Dallas eagerly following. Dallas and her nine puppies were then placed together in a larger crate and transported to the BC SPCA in Chilliwack. 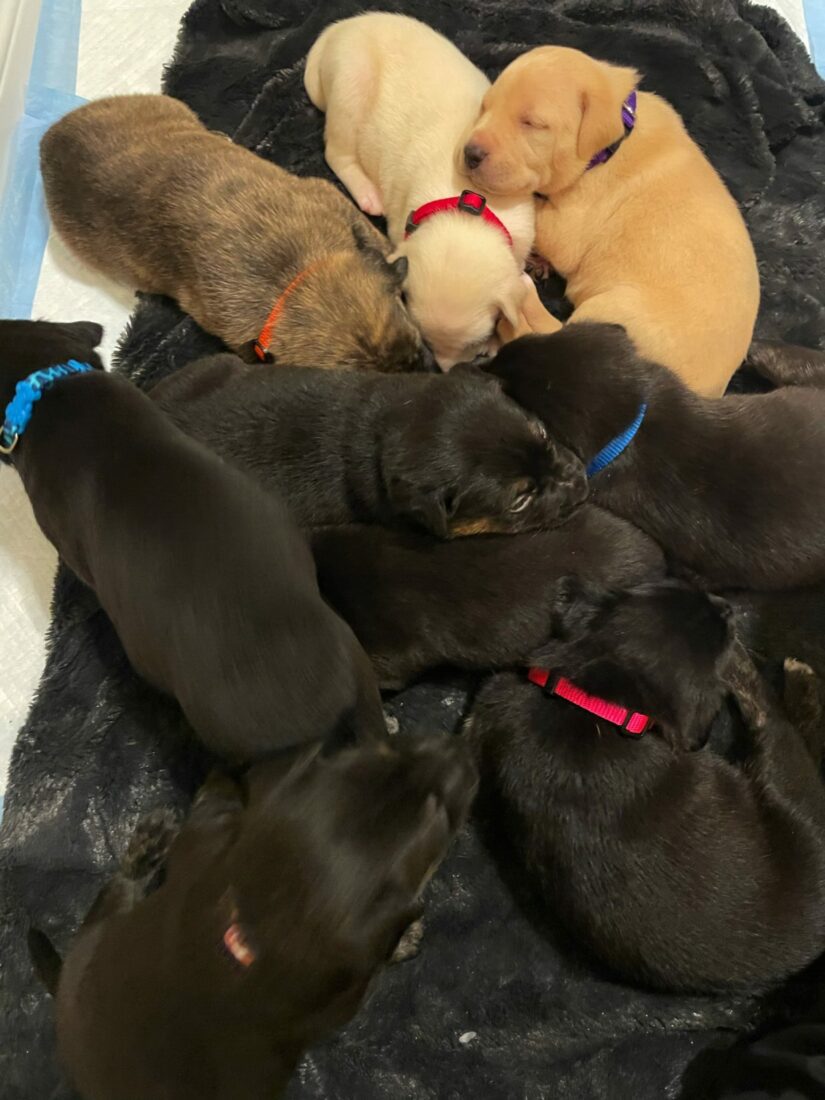 “We would never have found these puppies if Dallas hadn’t led us there,” says Drever. “She is an amazing mom who knew her puppies needed help.”

The owner was contacted and it was determined that Dallas had been roaming freely on his property. When she disappeared, he believed that she had been the victim of predators. “He recognized that he could not provide Dallas and her puppies with the care they required and chose to surrender them to the BC SPCA,” says Drever.

Once in SPCA care, Dallas and her puppies were given a full check-up by a veterinarian. Mom is underweight and will be on a feeding program to safely increase her calorie intake to bring her weight back to normal. The puppies are healthy and mom and her litter are now being cared for in a foster home.