With spring comes baby birds, and the hardworking team at the BC’s SPCA Wild Animals Rehabilitation Centre (ARC) have been busy looking after a brood of injured Bewick’s Wren nestlings who were brought into the facility recently by a caring member of the public.

According to Andrea Wallace, manager, wildlife welfare, the Good Samaritan had been monitoring the nestlings who were in a nest built in an overturned canoe near their property. Unfortunately, the birds were also being monitored by their outdoor cat. It was not long after when the cat brought one of the babies into the house.

“The finder went out to check on the rest and found the nest had been blown out of the canoe and the babies were scattered on the ground,” says Wallace. “At this stage they were pink and still had their eyes closed. The finder quickly put the baby birds back in the nest, brought it inside, and called Wild ARC to bring them into our care.”

Unfortunately the baby bird who had been caught by the cat was injured badly and had to be euthanized, says Wallace. However, the four other baby birds continue to be cared for by the highly trained wildlife rehabilitators at Wild ARC and are being fed a specialized diet every 15 minutes for 12 hours a day. 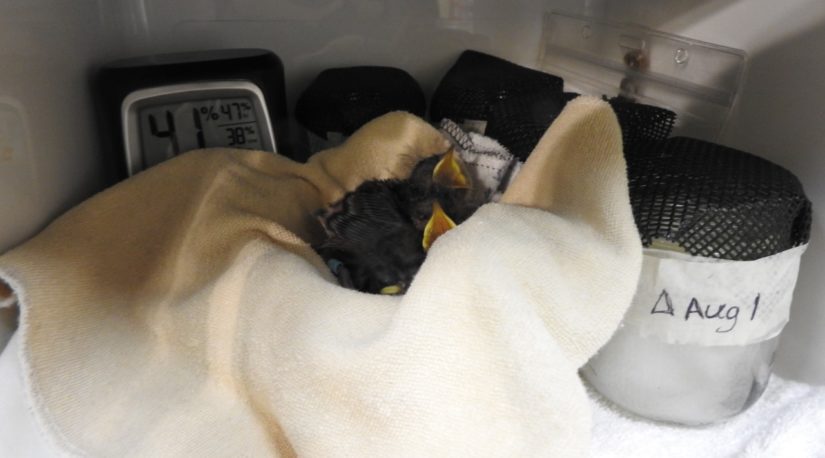 The tiny babies initially were being housed in the centre’s mini-incubator to provide a more stable temperature and have since moved to a hidey house. “They are doing well but are in for a long haul as they are now probably only about a week old and won’t start trying to fly for another few weeks and longer still until they’re ready for life in the wild on their own.”

The nestlings’ story is a good reminder that at this time of year especially, it’s important to keep cats indoors to protect all the baby animals being born.

Wallace says Wild ARC received 30 patients with cat wounds in the month of April alone. “Cats will sometimes catch the adult or parent bird leaving nestlings orphaned, or attack the nest itself. Unless the cat can be kept indoors until the nestlings are ready to fledge (leave the nest) and learn how to fly, the cat will keep returning and they will not be safe so the baby birds are admitted to Wild ARC.” 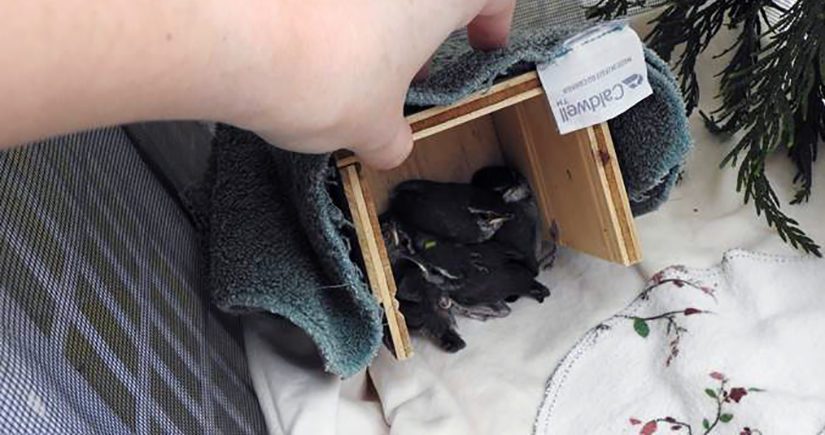 If you’re unable to keep your cat indoors, there are several options to help them co-exist peacefully with our wild neighbours. Below are just a few ideas.

Many cats like going outdoors and keeping them on a leash is one way to keep them safe.
Learn how to introduce a cat leash to your cat.

2. Building or buying a Catio

Catio enclosures (cat patios) allow your cat to remain outside while keeping themselves and wildlife safe.

Learn how-to on building a catio. 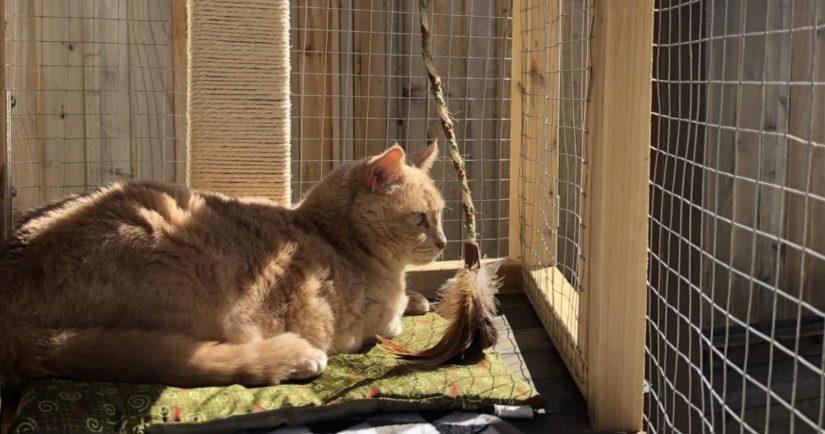 Cat bibs are a great way to give wild animals a chance to escape. Attached to the cat’s collar, when a bibbed cat tries to pounce, the bib flips up and blocks their line of sight and gives their unsuspecting prey time to escape.