The release of the brown pelican who was admitted to Wild ARC this summer was a cause for celebration, especially since the journey to get her back to the wild wasn’t an easy one.

This young brown pelican was transferred to Wild ARC from Wildlife Rescue Association. She was found at landfill site in Delta with a severe laceration on her rump likely from a predator attack. She was much too thin and had parasites in her mouth and feathers.

“Treating wildlife can be complicated” says Marguerite Sans, Senior Wildlife Rehabilitator at Wild ARC, “Wild animals see us as predators and doing something as simple as a physical exam can cause a lot of stress in our wild patients, which can actually be fatal. This pelican was so stressed when she was admitted that we had to perform her initial exam in two parts to give her a break.” 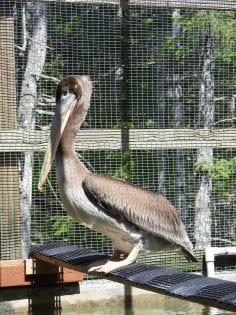 Based on her initial exam, staff at Wild ARC came up with a treatment plan to get this young bird healthy again. She needed surgery to address the wound and an x-ray to determine if there was any internal damage and to check for possible ingested fish hooks. She also needed a strict diet plan to regain her strength and get her back to a healthy weight.

The surgery went smoothly and her wound healed without any issue. Luckily, no internal damage or fish hooks were found in the x-ray. However, getting her back to a healthy weight proved to be more complicated.

“Brown pelicans are very social birds,” says Sans, “we think the stress of being in captivity without another pelican took its toll on her and she was reluctant to eat. Another factor is the food we are able to offer. Pelicans are very sensitive to the quality of food they eat. In the wild they actively hunt for a variety of live, fresh fish, but in a rehab setting, we were only able to offer previously frozen fish for the majority of her diet. She just wasn’t interested in eating on her own.”

Staff did everything they could to encourage her to eat – a mirror was used to give the illusion of another pelican, she shared her enclosure with gulls to give her some company, and staff used a technique called buffing where fish are tossed across the water to mimic movement of live fish to try to interest her in her food. 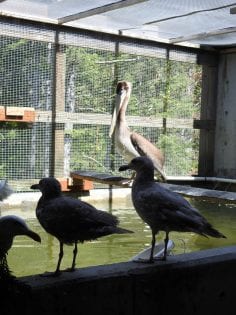 Despite this, she was still reluctant to eat on her own so staff had to tube feed her diet to ensure she was receiving the necessary nutrients. “Her case was very touch and go” says Sans, “It took almost 4 months to get her to a point where she was ready to be released.”

She finally started eating on her own and when her release day finally came, all staff and volunteers at Wild ARC were excited and relieved. Rocky Point Bird Observatory helped to organize a boat to get the pelican out to an appropriate release site.

“Everything went perfectly with her release!” says Sans, “She flew away with a long, strong flight which is exactly what we want to see. It was so rewarding to watch her fly away after all the work it took to get her to that point.”

After the release of this pelican, she was seen multiple times in the Victoria area. Vancouver Island is at the northern most point of the breeding range of the brown pelican. Other brown pelicans were seen in the area in the days before and after her release and staff are hopeful she will find others of her kind before she migrates down south for the winter.

Some amazing facts about brown pelicans: