The BC SPCA is hoping you can help Merritt, one of a litter of four kittens found living in a colony of feral cats underneath a townhouse in Prince Rupert by a kind neighbour who brought them to the BC SPCA.

When the kittens arrived at the shelter they were all underweight, dehydrated, lethargic and weren’t eating. Merritt also had a very cloudy eye. All of the kittens were examined by a veterinarian and given initial treatment before Merritt and her bonded sister Hope were transferred to the Kelowna BC SPCA for further care. 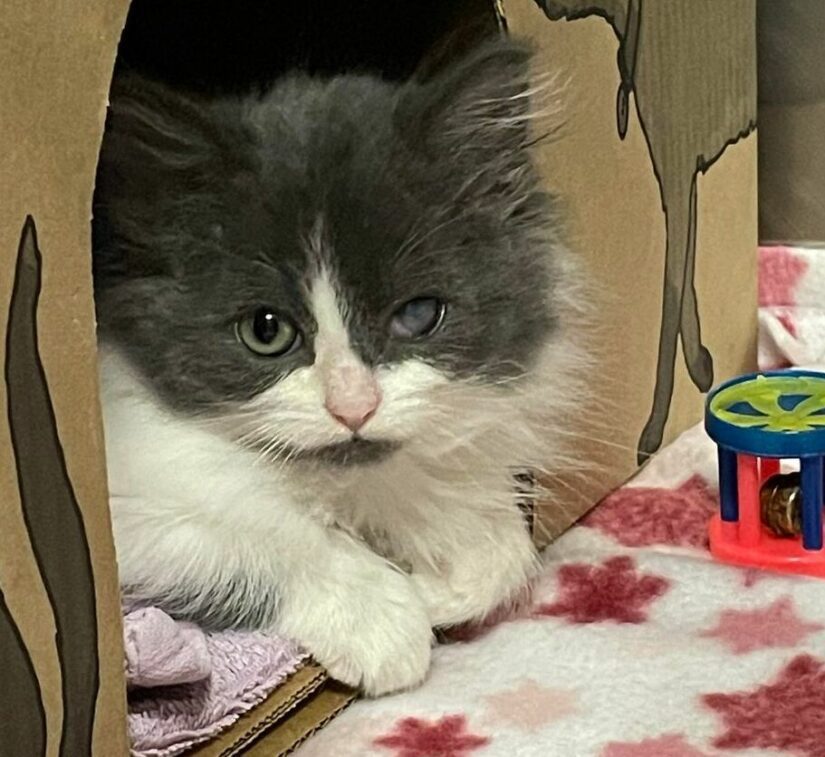 “When Merritt arrived at the shelter we hoped there was enough blood supply to her eye to make it viable,” says Sean Hogan, manager, BC SPCA Kelowna. “Unfortunately the scar tissue that has developed on her eye was restricting blood flow and the tissue was beginning to die so she required surgery to have the eye removed.”

Merritt will require months of on-going care at the BC SPCA as well as vaccinations, de-worming, and pain control. She and her siblings will also all be spayed and neutered.

“Merritt is a sweet kitten who is playful and cuddly,” says Hogan. “She is bonded to her sister Hope and we will be looking for a home for both of them once Merritt has recovered from her surgery. Merritt’s other siblings have already been adopted in Prince Rupert.”

Help Merritt & other animals in need