Leo the cat's adventures as a foster dad - BC SPCA

On Father’s Day we celebrate the important role dads play in our lives. Father figures like Uncle Leo are just as vital in helping to raise the next generation.

This cat has adjusted well to his new role as a foster dad. His guardian Hailey Kathler was initially worried that Leo might be territorial towards a mother cat and kittens. Kathler decided to foster orphaned kittens because they would be much less threatening to the ‘man’ of the house.

At first, Leo hissed at the new arrivals as if to say, ‘this is my house and I set the rules here’ but he was never aggressive towards them. After establishing the ground rules he relaxed and started to enjoy being with them. “Leo is about three-years-old and he loves to play. He has fun playing with the kittens and they chase each other around the apartment,” says Kathler.

One of the kittens, Sylvester, loved Leo and would follow him around. “If Leo was lying on his side on the couch Sylvester would come lie beside him. It was super cute and I thought, ‘aww he’s starting to like them.’” 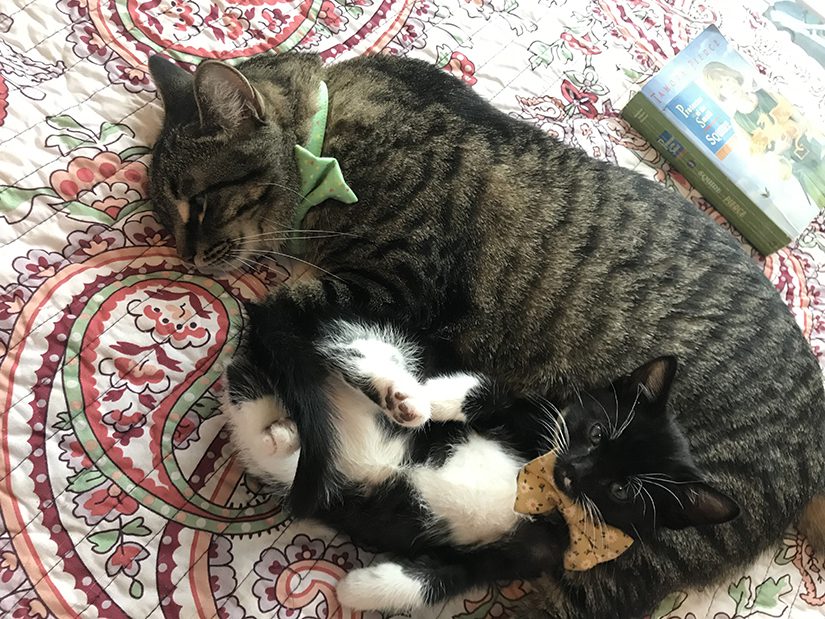 When the kittens were old enough it was time to bring them back to the SPCA to be spayed/neutered and adopted. Kathler and an SPCA staff member gathered up the young ones in a crate but Leo jumped on top of it and laid down. “I said, ‘Leo, get off, we gotta bring these kittens back.’ He wouldn’t budge so I had to pick him up.”

She says Leo then proceeded to flop on the ground in front of their feet blocking the door and being a pawsome protective dad. “It seemed to me that he was saying, ‘hey don’t take MY kittens! Where are you going?’”

They grow up so fast. Every parent knows that eventually they will have to let their kids explore the world on their own. All of the kittens went to good homes.

Leo might be a tough guy but he was no match for Kathler’s next foster kitten — who was affectionately named Cheeseball. He hissed at the tiny orange kitten but Cheeseball wasn’t intimidated at all. “Cheeseball would run up and attack Leo – jumping on him, swatting him and playing with his tail,” she says.

Normally if Leo was getting a bit grumpy Kathler would separate them but in this case it was harmless little Cheeseball who was causing trouble. The mischievous and energetic little goofball kitten definitely tired Leo out — being a parent can be exhausting sometimes.

As Leo bonded with the foster kittens he started to give them baths — making sure they were always clean and happy. Normally kittens depend on their mothers to clean them up after they drink milk and use the washroom but fosters take mom’s place in doing this vital work. Leo also helped socialize the kittens. Kathler’s friends often came over to watch them play and the kittens gradually became comfortable interacting with new people.

“Leo puts on a grumpy face on at the beginning but you can tell by the end that he loves the kittens and doesn’t want them to leave,” she says. “After they’re done playing together they’ll fall asleep all cuddled up and I think, ‘how can I separate you babies?’ But there’s no way I could fit five cats in my apartment so I have to let them go.” 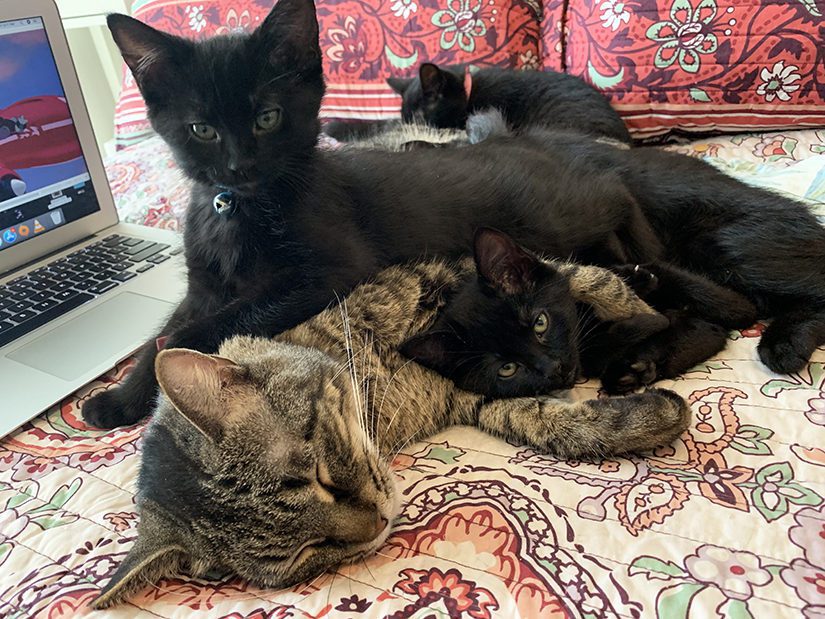 She and Leo are looking forward to their next fostering adventure and with kitten season underway chances are high that new tiny meowing faces will need their care.  Learn how to foster animals at the SPCA.

Want to receive stories like this, right in your inbox? Use the form below to subscribe for updates.