Kitten found on side of highway needs your help

The BC SPCA is hoping you can help Macy, a feral kitten found on the side of the highway near Williams Lake by a good Samaritan.

“The good Samaritan was driving home when she noticed a ‘lump’ on the white line on the edge of the road,” says Liz Dighton, manager, BC SPCA Williams Lake and district. “She wasn’t sure what it was but when she turned around to check she found the helpless kitten. She wrapped her up in a towel, placed her on the passenger seat and reached out to her daughter to help her find the closest veterinary clinic.” 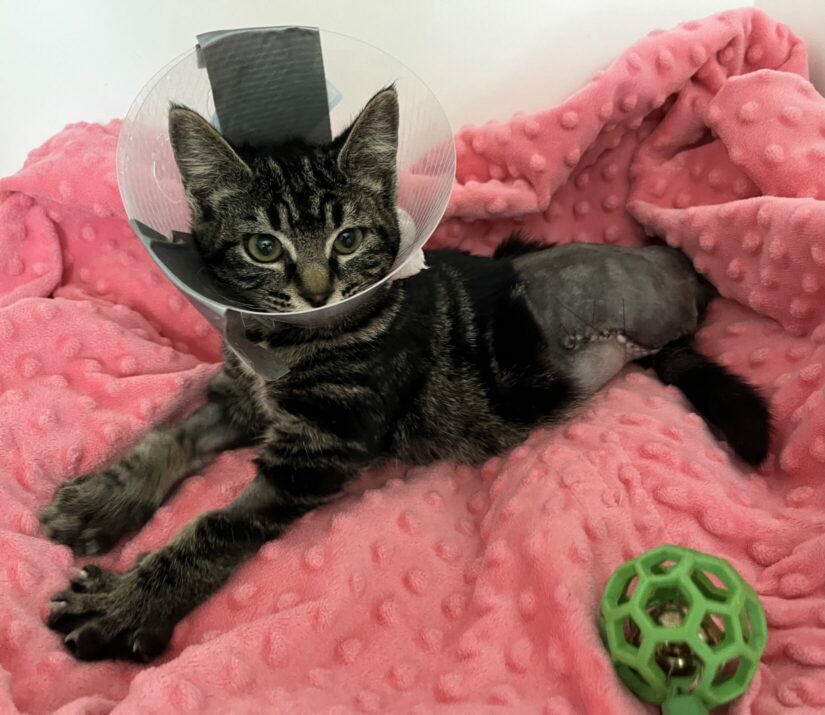 When Macy arrived at the clinic, she was examined and it was determined that she had a broken femur that most likely came from being hit or run over by a vehicle. “The break was so severe amputation was the only option,” says Dighton. “She also had internal parasites but was in overall good health.”

Macy is currently recovering from her surgery at the BC SPCA and will be placed with a foster to continue her healing. “Macy hisses when she first sees you but she quickly relaxes and becomes a friendly, sweet girl once she knows you are willing to pet her and stroke her head,” says Dighton. “Back scratches and chin rubs turn her into a purr machine. She just loves it when people spend time with her.”

In addition to her surgery, Macy will require weeks of on-going care at the BC SPCA as well as vaccinations, de-worming, and pain control. She will also be spayed and once she has recovered she will be available for adoption.