Fish play diverse and significant roles in our society. Here in Canada, they’re the third most popular pet after cats and dogs, and the second most common research model after mice. Millions are caught recreationally across the country every year, while at least a billion more are farmed and caught commercially. Fish are also essential to the ocean, lake and river ecosystems that we depend on.

Even though fish are so widely used, we tend to give them very little thought. When we do notice them, we often don’t see past their glassy stares and gaping mouths to wonder at their inner lives. Yet, a growing body of research from around the world is revealing just how much we might be overlooking. 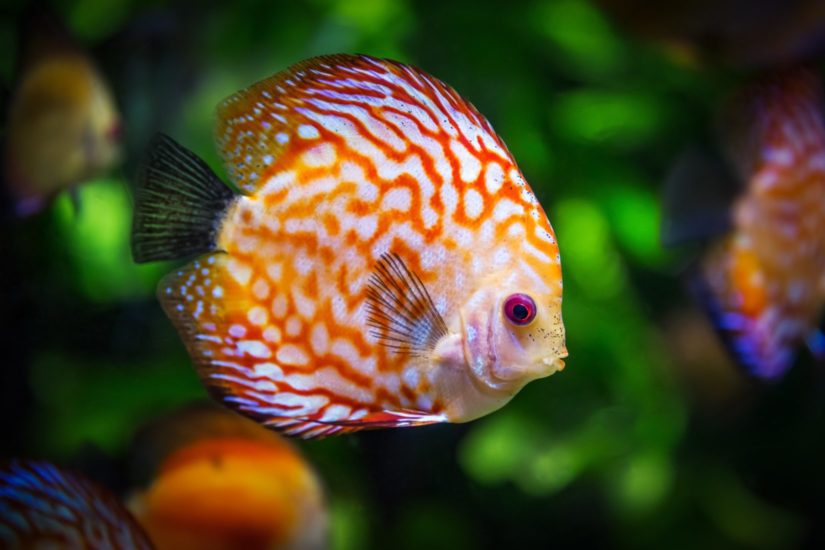 1. Fish are social and cooperative

Giant moray eels and Red Sea coral groupers often hunt together. First, the groupers make gestures to ask the eels to join them on a hunt — a kind of fish sign language. Then, once out hunting, they adopt complementary roles: the eels can squeeze into crevices too small for the groupers, while the groupers are faster swimmers in open water. Working together, the pair has a better chance of catching something to eat.

Other species of fish work together to hunt prey. Fish, such as groupers and coral trout, will send a visual signal to show other fish the location of a hidden prey. Together, they will catch prey at a higher rate than when hunting alone. Groupers don’t just cooperate with other fish. They’ll also invite octopuses to hunt. 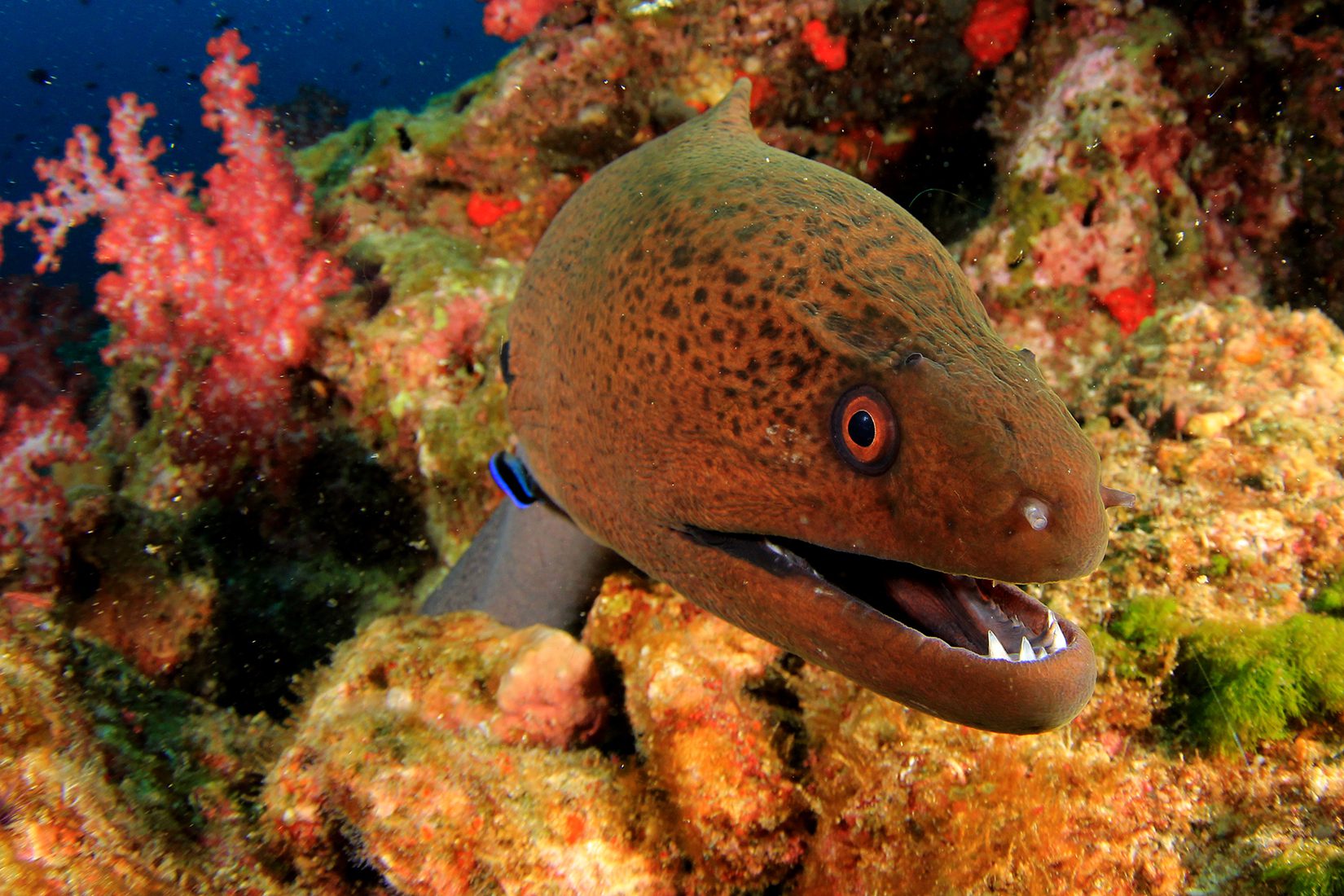 Fish interact and form relationships with each other and other fish species. For example, bluestreak cleaner wrasses provide a special service to fellow fish. The wrasses swim into the gills and mouths of their “clients” to remove and feed on their parasites. In some cases, their clients are fish who’d otherwise eat them. So, to help appease them, the wrasses will often stroke their clients with their fins. Studies have shown that being stroked by cleaner fish is not only a pleasurable feeling for client fish, it also helps them to relieve stress — almost like a therapeutic massage. 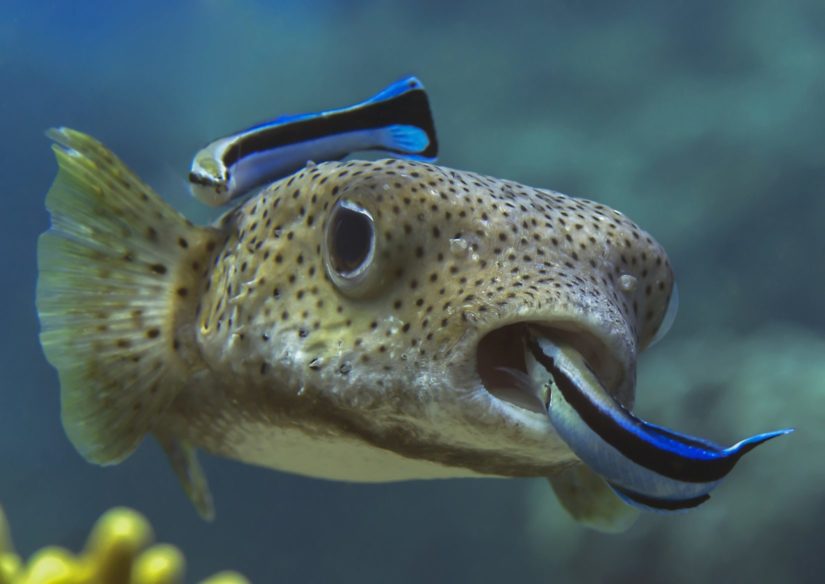 Contrary to popular belief, fish do have great memories. Some species of fish can recognize and remember humans that give them food rewards. Cleaner fish, as described above, can recognize their clients that they regularly clean, which can be up to 100 different fish. The clients also remember and recognize their specific cleaner.

Fish can also remember musical tunes; one group of researchers fed their fish while playing a specific song before releasing them into the wild. Five months later, the fish returned when the song played at sea. 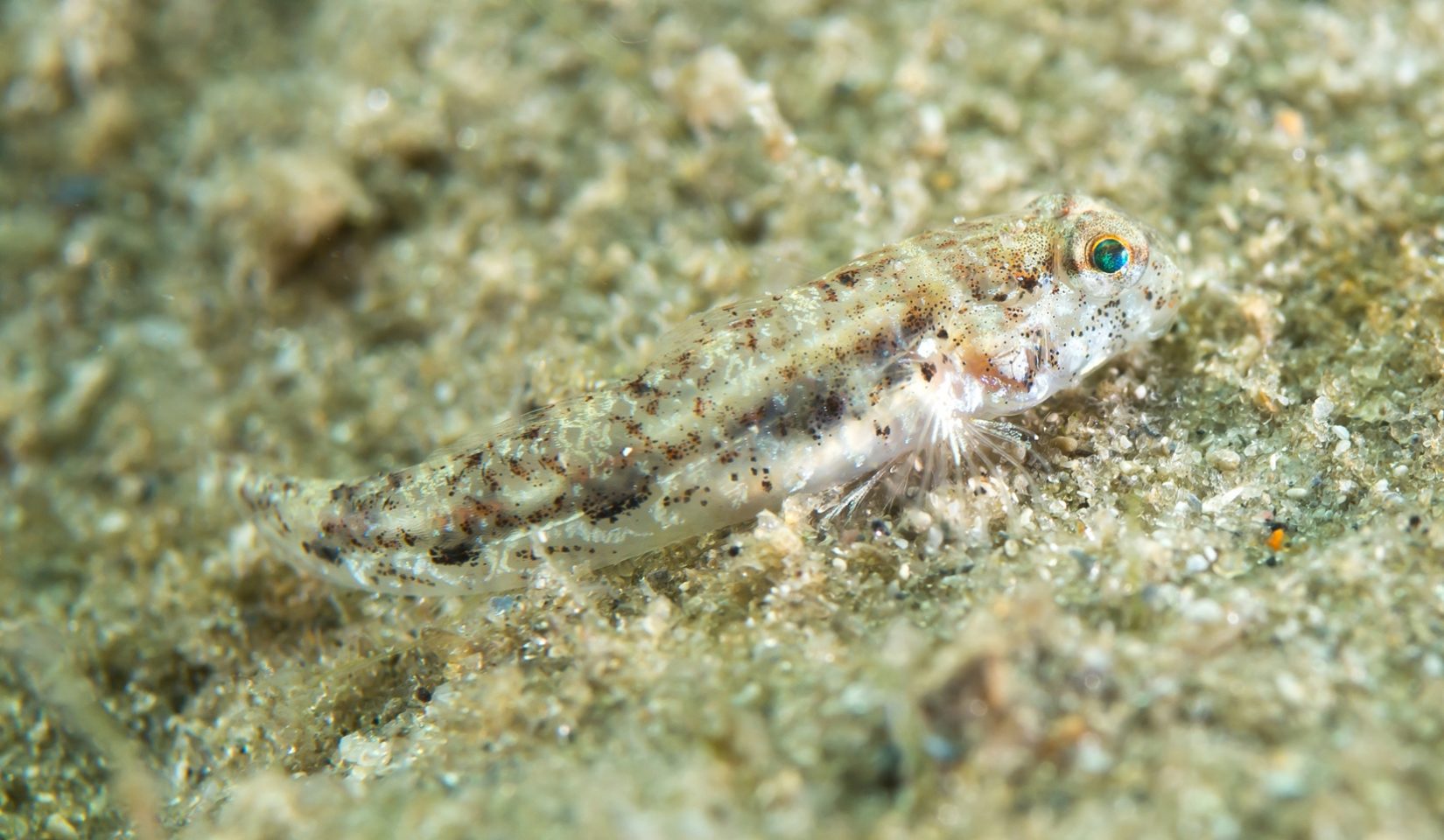 At low tide, frillfin gobies stay close to shore in tide pools to feed. When a predator such as a heron comes along, they escape by leaping into an adjacent pool. They’re remarkably accurate — missing a jump would mean being stranded on the rocks. Frillfins are able to leap from pool to pool by memorizing the layout of the tide pool while swimming over it at high tide. All it takes is one try to create this mental map, and they can still remember it more than a month later.

4. Fish are smart and can learn

Fish will avoid situations they know to cause them pain, and will seek out experiences with rewards. Fish can also learn how to use tools. Many fish, for example, use rocks to crack open bivalves such as clams, oysters and mussels for food. The archerfish specifically displays incredible intelligence. With incredible aim, archerfish can shoot powerful jets of water out of their mouths to knock down insects flying above them. They learn this impressive skill by watching and copying other archerfish – learning the correct volume based on target size.

More recently, it was discovered that archerfish can recognize human faces and tell them apart. Even more remarkably, they can still identify people with faces turned away from them. 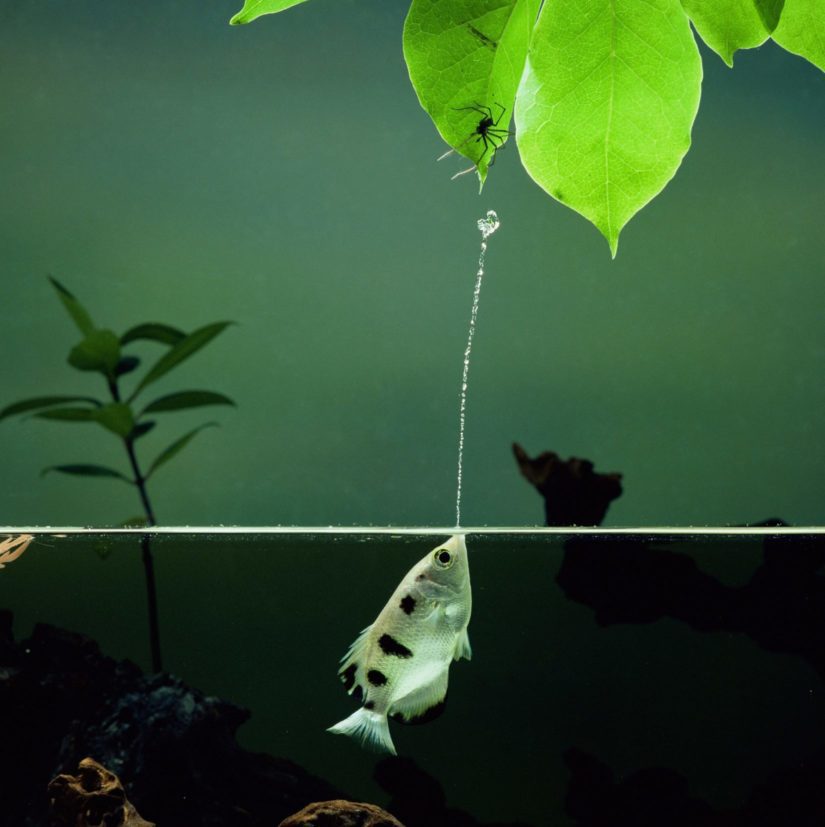 Salmon and sea trout live in both saltwater and freshwater. These fish hatch in freshwater, and then swim to the sea where they mature into adults. They undergo significant body changes and have specialized organs to adapt to and excel in both freshwater and saltwater.

Even though fish do not have vocal chords, they still excel at communicating with one another. They accomplish this through various sounds, scents, electrical pulses and motions.

Elephantfish communicate using electricity. Through unique electrical signals, they can tell each other apart. These signals say how old they are, how big they are, how far away they are and even whether they’re male or female. Males use them to serenade females, and pairs “sing” duets together. 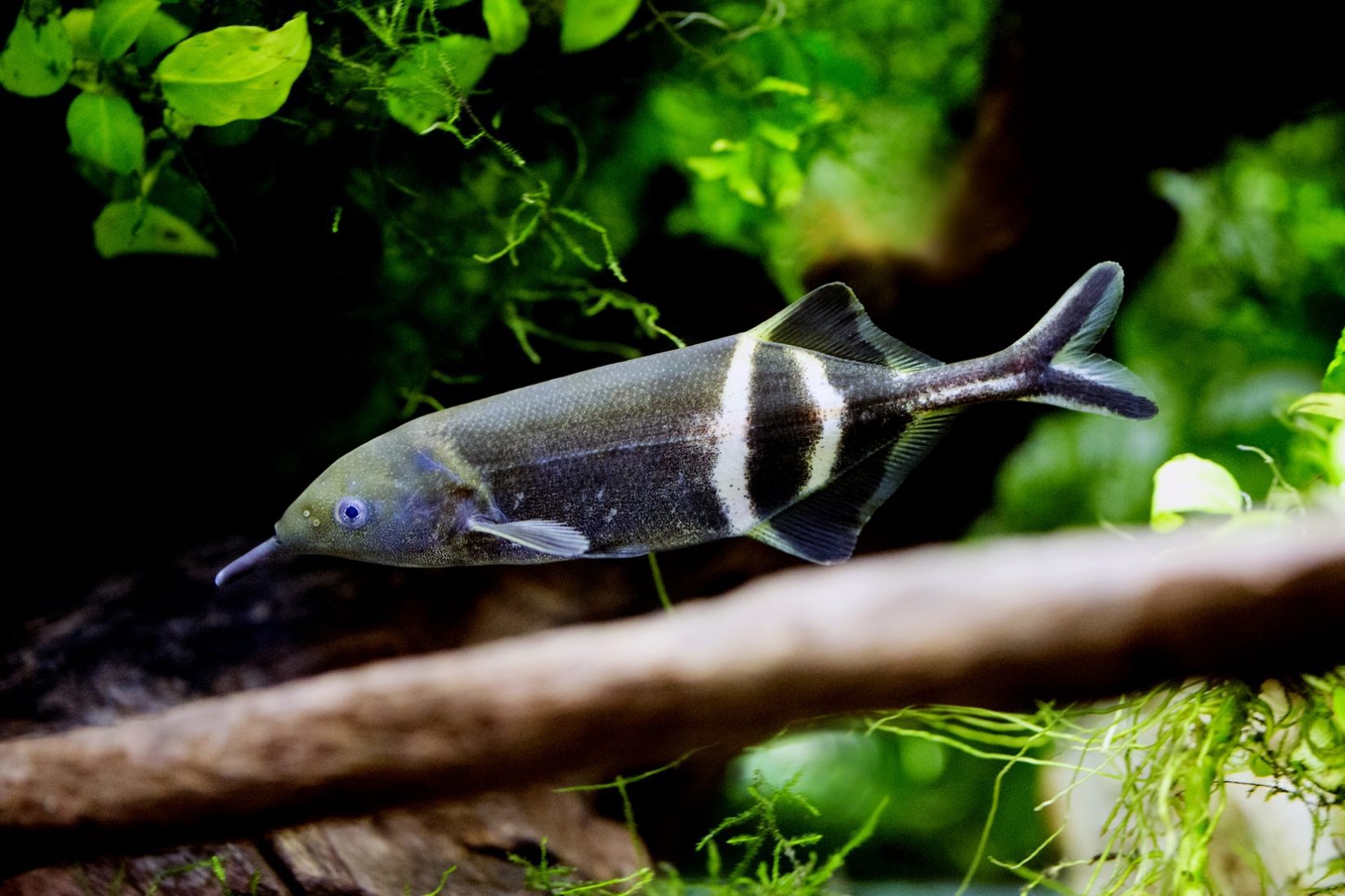 Groups of knifefish, another type of electric fish, can even change frequency to avoid jamming each other’s signals. One scientist who studies them has made these signals audible and likens the adult knifefish to violins and the younger ones to flutes.

Adult salmon living in saltwater environments migrate a vast distance to return to freshwater to spawn. Salmon can travel up to 50 km per day on their spawning journeys, which is equivalent to us running more than a marathon every day. In total, their migration can reach upwards of 3,000 km from the ocean upstream through freshwater where they will spawn. Their total journey equates to driving halfway across Canada!

The migration would not be possible if salmon weren’t such excellent swimmers. Swimming upriver is no easy task, but luckily salmon are great jumpers and can jump up to two meters over obstacles in their way. 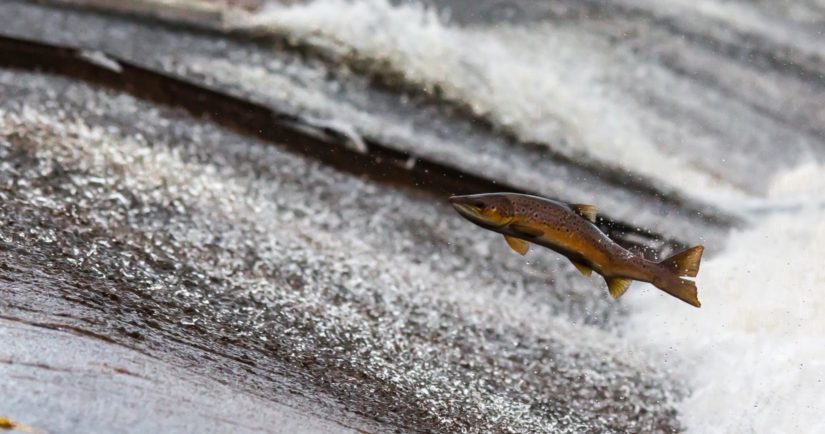 Fish can detect movement in the water through a special row of sensory scales along their body called the lateral line. These sensory scales pick up low frequency sound waves that vibrate through the water.

Salmon are known as one of nature’s best navigators due to their sensory capabilities. Salmon return to the same river, and sometimes even the same riverbed, in which they were born to spawn. They are guided by magnetic fields and their keen senses. It’s believed the salmon, who can smell chemicals down to one part per million, can detect pheromones that are unique to their home stream.

Fish are also known to change colours depending on camouflage needs, environmental conditions and time of the year. Colours range all across the rainbow, from blues and greens to pinks and reds.

10. Fish are important to sustaining ecosystems

Salmon are the nutrient backbone to B.C.’s coastal ecosystems. Pacific salmon are semelparous, meaning that after they reproduce, they will die. Their carcasses are an essential nutrient source for many of B.C.’s resident animals — like bears, wolves and birds — and provides nutrients to the new salmon hatching.

Finfish represent the largest component of the aquaculture industry in Canada, with over 26 different species of finfish farmed. The most common farmed fish species in Canada are salmon, trout and Arctic Char. Canada’s first Code of Practice for Farmed Salmonids was published only as recently as 2021 by the National Farm Animal Care Council.

What does this mean for fish welfare?

Given their roles as pets, as food, as entertainment and as research subjects, fish are by far the most used vertebrate on Earth. Despite this fact, they are still not very well understood — or appreciated. They continue to be seen as simple, almost robot-like creatures with little capacity to think or feel. Yet, as the examples above demonstrate, fish are sensitive and intelligent animals whose unique welfare needs must be considered.

Read the BC SPCA’s stance on fish welfare. 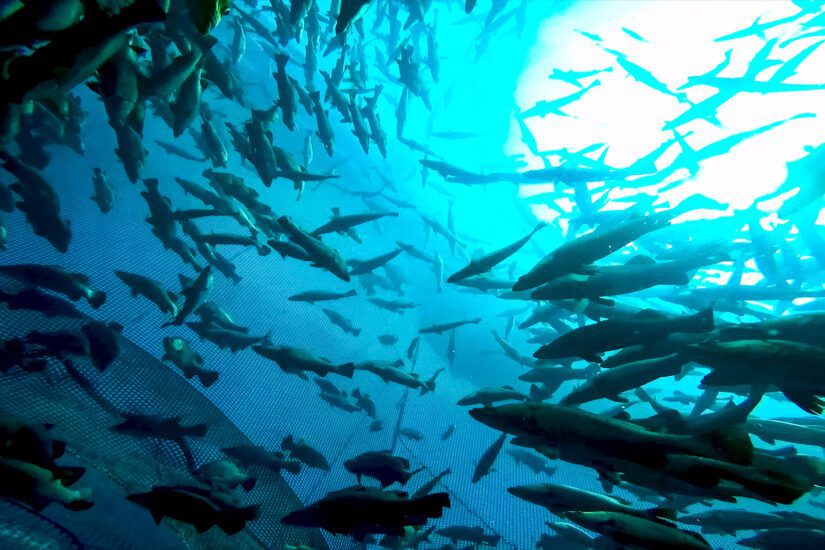 To stay up to date on wild animal issues in B.C., subscribe to our WildSense e-newsletter. WildSense comes straight to your inbox just six times a year.