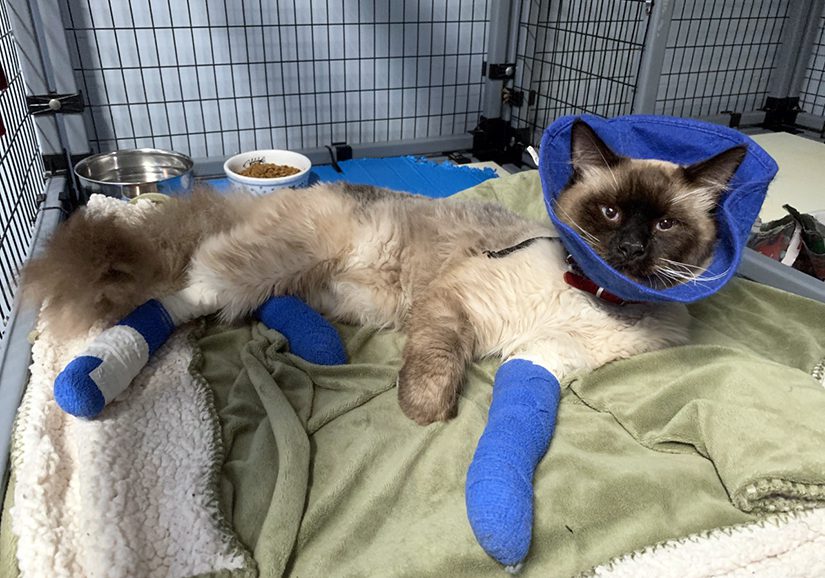 The BC SPCA’s Alberni-Clayoquot Branch is asking members of the public to help with medical costs for a stray cat called Kyndill, who came in with serious burns on his paws.

Kyndill is about a year old and was brought to the SPCA by a Good Samaritan. “Kyndill’s paws were peeling and causing him so much pain,” says Alberni-Clayoquot SPCA branch manager Sam Sattar. “Staff are taking Kyndill to the vet every day to have his bandages changed and apply cream to his paws. He is on multiple pain medications and has a long road ahead to recovery,” says Sattar.

Kyndill will need about a month in SPCA care to heal before going up for adoption. His medical bills have reached $3,550. “Kyndill is so affectionate and loves to snuggle,” says Sattar. “He’s a beautiful Balinese mix with the biggest blue eyes and has lots of love to give.”

If you can help Kyndill and other animals in need at the Alberni-Clayoquot SPCA, please visit spca.bc.ca/medicalemergency or visit the centre at 4936 Broughton Street, 250-723-5269.