Thursday, July 8, 2021, 4 p.m. Update: BC SPCA animal protection officers were able to rescue 41 animals from 27 different properties behind fire evacuation lines in Lytton today. The SPCA was granted access to the area between 10 a.m. and 2 p.m. today to search for animals in the area. 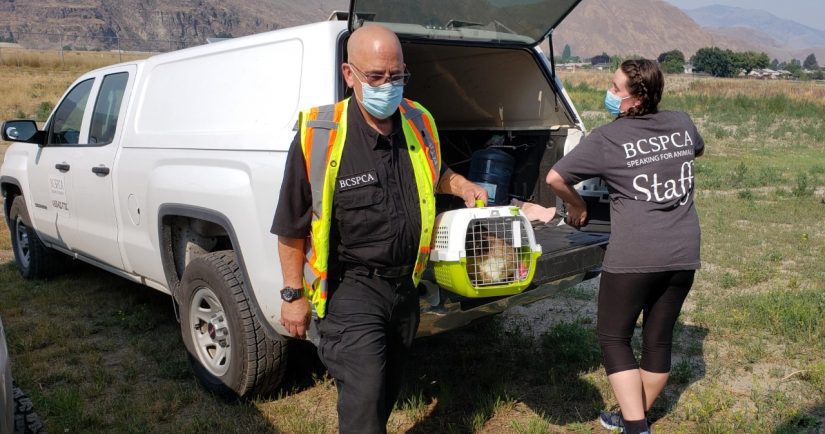 Working from lists provided by residents through the BC SPCA Helpline, the Thompson-Nicola Regional District and Lytton First Nations, SPCA officers found and brought to safety 12 cats, five kittens, four dogs and 20 farm animals. The companion animals are being transported to the BC SPCA’s Animal Evacuation Centre in Kamloops or to veterinary clinics if needed, and the farm animals were transferred to foster homes.

“At the Evacuation Centre the animals can be claimed by their owners if they are staying somewhere they can keep them, or we can provide free emergency shelter if needed,” say Lorie Chortyk, general manager of communications for the BC SPCA. “We are here to support the residents of Lytton and their animals however we can.”

The rescue efforts were carried out by 10 SPCA animal protection officers and two shelter staff, with additional staff and volunteers on hand to care for incoming animals.

Thursday, July 8, 2021, 1 p.m. Update: BC SPCA officers are behind fire evacuation lines in Lytton today (July 8) looking for animals still in the area. SPCA animal protection officers from the Interior, North and Lower Mainland were deployed to attend properties and bring animals to safety.

“As we’ve been waiting for permission to access the area we have been documenting requests from pet owners through our BC SPCA helpline and we also received a list of properties and animals from the Thompson-Nicola Regional District and the Lytton First Nations,” says Lorie Chortyk, general manager of communications for the BC SPCA. “The plan is for our officers to bring animals to a staging area at the edge of the evacuation line, where additional SPCA staff will be waiting to transport the animals to our Animal Evacuation Centre in Kamloops. There, the animals will be reunited with their owners, and if the families need emergency boarding for their pets, we will admit them into our temporary care.”

Chortyk says the SPCA is hoping to locate as many animals as possible today. “We can only imagine how devastating it is for these poor families to lose their homes and possessions or to not know what is left of their properties,” she says. “By returning their pets safely to them and providing whatever emergency support they need, we hope we can relieve some of the incredible stress and hardship they are facing.”

Original Story: Wednesday, July 7, 2021: The BC SPCA has been granted permission to go behind evacuation lines in Lytton on Thursday, July 8 to rescue pets and farm animals still in the area. “We have been documenting all requests from animal owners since the fires broke out and these requests are still coming in through our Animal Helpline and ESS,” says Lorie Chortyk, general manager of communications for the BC SPCA. “We have officers and transport vehicles standing by to attend the properties as soon as we have access tomorrow. It is our goal to get every animal out but we are working with a one-day window, which is challenging.” 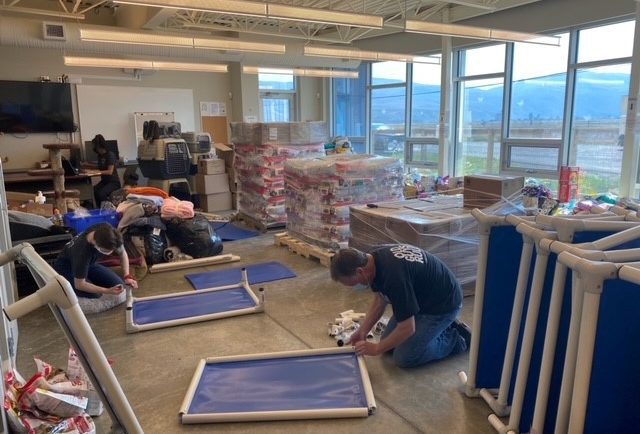 BC SPCA special constables will transport the animals to the edge of the evacuation lines, where they will be met by SPCA staff who will shuttle the animals to Kamloops. There the animals will be returned to their owners or admitted for SPCA emergency boarding, if the owner requires temporary shelter for their pet.

In addition to animal rescue efforts behind evacuation lines, the BC SPCA has set up a temporary Animal Evacuation Centre at 350 Dene Drive in Kamloops (north shore) for pets who have been displaced by the wildfires and need emergency boarding.

“We have been taking in animals for the past week at our BC SPCA shelter in Kamloops,” says Chortyk. “We transferred the homeless animals in our Kamloops location to nearby SPCA shelters in Vernon and Shuswap to make room for animals displaced by the fires. The Animal Evacuation Centre is the next step to accommodate the increasing number of animals needing help.”

The temporary Animal Evacuation Centre is located at High Country Cold Storage, a 5,500-square-foot air-conditioned warehouse, and will house incoming dogs. Cats and small animals admitted for emergency boarding will be transferred by the SPCA to the Kamloops shelter for care. 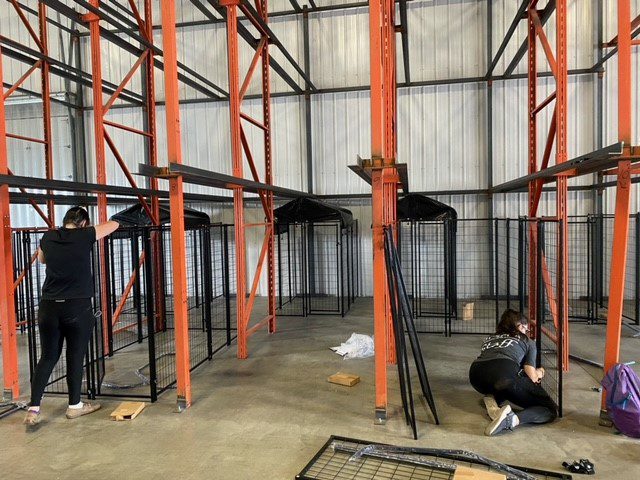 The Animal Evacuation Centre is being staffed by BC SPCA personnel from Kamloops and those being deployed from other parts of the province, as well as local SPCA volunteers. “We are only using SPCA volunteers at the centre at this time as they have already received the animal care and management training required, but we do appreciate the offers of help we have received from the public.” says Chortyk.

She noted that anyone interested in helping by becoming a volunteer foster home can find out more information at spca.bc.ca/ways-to-help. Chortyk said people willing to help the emergency response for pets displaced by the wildfires can also make donations at spca.bc.ca/emergency or drop off supplies (leashes, collars, food bowls, toys for dogs, cats and small animals, cat litter and cleaning supplies) to the Kamloops SPCA at 2816 Tranquille Road. For COVID safety reasons, please leave items outside the front door.

Anyone needing emergency boarding for their pet during the wildfires is asked to please contact the BC SPCA Animal Helpline at 1.855.622.7722 for more information or visit the animal help desk at the Kamloops ESS Centre. Those who have already registered with ESS can bring their animals directly to the Animal Evacuation Centre at 350 Dene Drive.

The BC SPCA is grateful to the donors who generously funded our emergency trailer in Kamloops to supply our Animal Evacuation Centre – the Leon Judah Blackmore Foundation, Mark Montemurro, and an anonymous donor.