How to spot anxiety in cats - BC SPCA 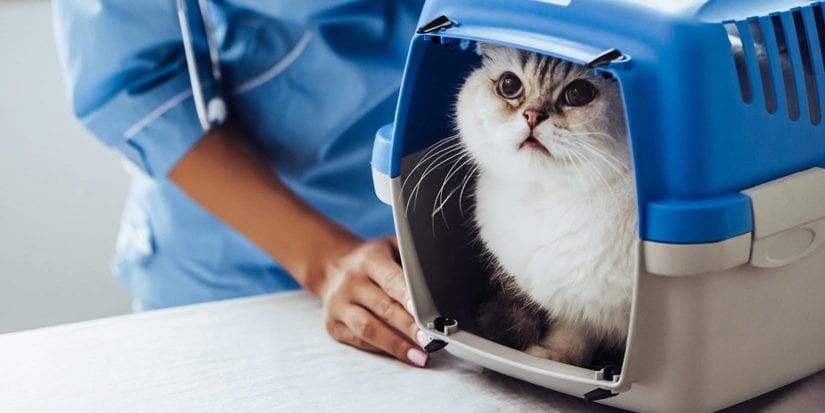 A vacuum cleaner, a car ride, a fun party with friends. These things might seem innocuous to pet owners, but they could trigger anxiety for your cat.

This might explain why, upon switching on the vacuum cleaner, your cat’s ears go back and they slink away to hide underneath the couch. Or why they hiss and meow whenever you attempt to take out their carrier to go to the vet. While deemed a purr-snickety species at times, if your cat is displaying these behaviours, he or she isn’t being “difficult” or “weird” but is reacting defensively because they are feeling afraid or stressed.

“The thing about recognizing stress in animals is that individual animals handle it differently,” says Dr. Karen van Haaften, the BC SPCA’s senior manager of behaviour and welfare. “Some cats are going to run and hide underneath the bed. Some cats will attack the scary thing to make it go away. There’s a lot of diversity in behavioural responses to stress.”

Van Haaften says it’s key for the pet guardian to learn how to detect anxiety in their cat because in addition to behaviour varying from cat to cat, anxiety triggers also depend on the cat as well. Some of these can be traced to their socialization background, while in others, it can be part of their personality. “It varies from cat to cat,” says van Haaften. “I have a cat who is deathly afraid of being brushed and the other one can’t get enough of it. This is likely because the other cat came from a situation where they were never been brushed before.”

Common triggers and signs of anxiety in cats

While anxiety triggers depend on your cat, common triggers can include:

Similarly, while every cat is different, there are common physiological responses that indicate anxiety in cats that include:

Additionally, common body language signs that indicate anxiety in cats might include:

When feeling anxious or fearful, common behavioral responses in cats include:

What to keep in mind when dealing with an anxious cat

When dealing with an anxious cat, says van Haaften, it’s also important to understand that while cats are predators, they are also a prey species. This means that when they become truly afraid, “They tend to act like they’re fighting for their life,” says van Haaften. “Dogs who are anxious might put up with a lot and you can often calm them down when they’re upset. Cats aren’t like that. If they percieve a threat, they may lash out at familiar people. They may act very out of character, and they need time and space to calm down after a fright.”

For example, van Haaften often hears from clients who have tried to pick up their cats to console after a scary event only to receive an aggressive or extreme escape behaviour response from their cat in return. “That’s because the cat is in defense mode and still feels like they’re in danger, even if the guardian knows that danger is over.” she says. “When you’re dealing with a truly terrified cat, they don’t need to be coddled or picked up to calm down. They need to be placed in a safe environment and given time to calm themselves and recover.”

Signs that your cat might need to visit vet

Fear and pain can be very difficult to differentiate behaviorally, says van Haaften, since a cat who is in pain might act in the same manner as they would if they were afraid. If a cat isn’t feeling well, they might socially withdraw and hide, which can easily be mistaken for anxiety or fear.

The way to tell the difference according to van Haaften is “that a normal anxiety response would can be linked to an environmental trigger. So the cat would remain anxious as long as the trigger is present, and return to baseline behaviour after it’s gone. When the trigger is not present, they should be acting normally, i.e. they’re eating and drinking and being social, and keeping with a normal routine.”

With a healthy cat, it can take minutes to hours for them to calm down and resume back to their normal behaviour. Longer periods of hiding, or the presence of other symptoms such as lethargy, inappetance, changes in drinking or litter box behaviour, reduced social behaviour, etc. could indicate your pet has a health issue.

“If your cat is showing signs of profoundly inhibited behaviour, like withdrawing or isolating themselves and you can’t find a trigger within their environment that could explain their behavior, that could mean your cat isn’t feeling well,” says van Haaften. “Talking to your veterinarian is a good idea.”

How do I welcome a new cat into my home?
How can I make my cat/kitten’s first visit to the vet a good experience?
How do I introduce my new cat to my old cat?