Against all odds, family reunited with their cat - BC SPCA

She went missing from her family’s co-op grounds in Victoria. She was found in Nanaimo. No one knows how Miri, a three-and-a-half-year-old, blue and cream tortoiseshell cat, made the more than 100 kilometre journey. Her family, after months of looking and not hearing anything, thought that she was gone forever, but against all odds, and thanks to a good Samaritan and a microchip, they were reunited.

“Miri would always come back in when we called her,” says Megan. “The day she went missing, we called her name over and over again, tried treats and searched the grounds but she was nowhere to be found.”

The family had no idea what would have caused her to leave her home, something she had never done before. “A large deer had visited the co-op grounds that day, so we aren’t sure if that spooked her.”

When they realized Miri was missing, the family put up posters around the neighbourhood and kept hoping she would return. “After we hadn’t heard anything for a couple of months, I remember thinking about putting away her food, but I thought no, not just yet and then I got a phone call from the Nanaimo BC SPCA.”

“A good Samaritan brought Miri to a veterinarian because she was injured,” says Megan. “She had somehow got her collar caught around her head and front leg causing a wound from the embedded collar.” After her wound had been treated, she was sent to the Nanaimo BC SPCA.

When the “stray” arrived at the Nanaimo shelter, they scanned her for a chip and were able to get the contact information for her guardians.

Megan says she immediately called her employer, and told them she needed to take a vacation day to go pick up Miri and headed to Nanaimo the next day with her youngest son, Dean, who was devastated when Miri went missing.

No one knows how she got from Victoria to Nanaimo. “We were a little shocked when we first saw her, because she was so skinny,” says Megan. “As soon as she saw us, she came right over.” 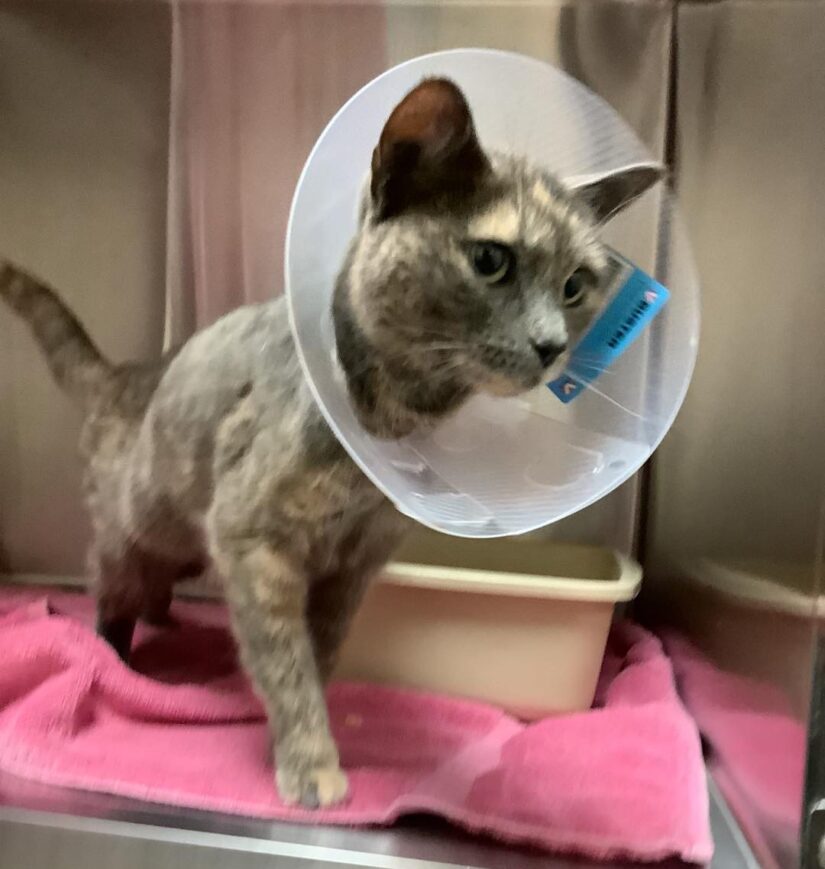 “When we got her home, all she wanted to do was snuggle, be on my lap and purr,” says Megan. “You could tell she was finally able to relax.”

Megan says Miri didn’t ask to go outside for two months after her return. There have been other changes in her as well. “She is definitely a little spicier than she used to be,” says Megan. “She always loved to play attack, but she would never use her claws or teeth, just grab with soft paws, now she smacks a little harder and will touch you with her teeth. She also purrs more often and louder now.”

Megan adds she also doesn’t take any guff from Frank, their dog. “She stands her ground,” she says.

“We are so thankful to the good Samaritan who brought Miri to the veterinarian and the fact that we registered Miri,” says Megan. “Without it we would never have been reunited.”