As we head into the summer months, the BC SPCA is seeking new foster volunteers across the province, particularly on Vancouver Island, the Okanagan/Kootenay Region, Lower Mainland and Fraser Valley, and the Northern region.

“Foster volunteers provide thousands of vulnerable animals with care, support and, more importantly, a place to thrive and recover every time they open their homes to an animal from a shelter,” says Michelle Rodgers, senior manager of volunteer resources. “It also helps prepare animals for adoption by giving them a chance to live in a home where they can fully express their personality, work to overcome fears or recover from trauma.”

According to Rodgers, there’s typically an elevated need for foster volunteers during the warmer months as people’s availability changes due to vacation time. Additionally, an increase intake of vulnerable, orphaned, nursing or pregnant animals as well as displaced animals from natural disasters, including wildfires, also require more hands-on deck.

“In the spring and summer months, we see an influx in kittens and nursing cats,” she says. “We could not provide the level of care and support these animals need without our foster program and the volunteers who provide a safe, comfortable home for them.”

One recent foster success story involved a dog named Yogi who arrived at the Cowichan & District shelter from a harrowing situation.

“He was afraid of people, noises, and pretty much everything,” says Rodgers. He was quickly brought to the foster care of Rosalie Scheffer for some TLC. There, he “blossomed from a scared pup to a confident dog ready to the take on the world.” Scheffer, who had fostered several dogs over the years, was so taken with Yogi that she ended up adopting him, making him a happy “foster fail.”

Another recent foster success in Williams Lake involved four orphaned kittens found underneath a mobile home. The kittens were brought into the shelter with upper respiratory infections, and internal parasites. They were also under weight and so weak they couldn’t lift their heads to eat. Fortunately, the kittens were soon placed in foster care with Rachel Young where they not only recovered but thrived, and were eventually adopted into their furever homes. 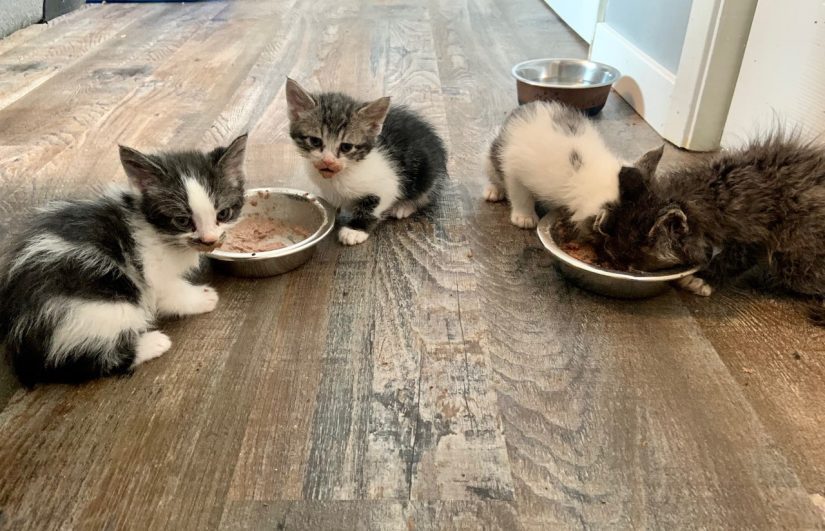 In the Lower Mainland and Fraser Valley region, another success story involved a one-year-old pregnant cat named Aloe who was originally part of a hoarding case. She was initially scared of people and half-bald from a bad case of fleas. Aloe was soon placed with a long-time foster Allison Simpson. Since then, she’s given birth to her healthy eight kittens, her hair has mostly grown back, and she has become much more relaxed around people. Aloe adapted so well that she, along with her kittens, were adopted out to their forever homes in June.

Another recent foster success occurred in the Okanagan/Kootenay Region and involved a cat named Smokey Joe who was soon placed with a long-time foster parent named Sharon from the West Kootenay Community Animal Centre.

“When Joe was found, he was in terrible condition – emaciated, and heavily matted; the staff weren’t sure if he’d make it,” says Rodgers. “He was placed in Sharon’s care to recover. Slowly, he adjusted, and grew into a loving and healthy cat! Sharon’s love and patience allowed Smokey’s true colours to shine, and he is almost ready for adoption.”

“I’m moved by our volunteer’s willingness to open up their homes to vulnerable animals and provide a safe place for them to thrive,” says Rodgers.

For additional information on volunteering with the BC SPCA, please check out https://spca.bc.ca/ways-to-help/volunteer/foster or email volunteers@spca.bc.ca.