Dakota aka Audi - BC SPCA 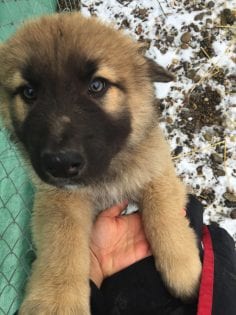 Dakota was only a couple months old when he was surrendered to the BC SPCA North Peace Branch. Being a German shepherd mix, this tiny pup would grow up to be fairly big and strong, so he needed ample space to roam around.

Dakota’s lucky time came in late 2015 when he was spotted by his new guardians. They gave us this update to let us know how he has settled in and what happened after they discovered poor little Dakota was struggling with some health issues:

The famous humourist and lecturer, Josh Billings, once said, “A dog is the only thing on earth that loves you more than he loves himself.” About 2.5 years ago, I would have said he was crazy as I was a “crazy cat lady.” We had adopted two cats from the SPCA and they were my whole world. That changed one Friday afternoon when I went to my local BC SPCA in Fort St. John to drop off a few cat donations. I had always wanted a dog but, growing up, my father had allergies. After dropping off my cat donations, I decided to go and visit the dogs, just to take a peek. The shelter had a few dogs that afternoon but one fuzzy teddy bear stole my heart. His name was Dakota. At three months, he was calm, fluffy, and adorable. I stayed with him until closing time that evening and went home to convince my fiancé to come and meet him the next day. I will remember his words, “Only if we both get along.” I thought, you just wait ‘til you see him!

The next day we went to meet Dakota and my fiancé and I were both overjoyed to take him home. Dakota, who we now call Audi, joined our family with his two cat siblings, Simba and Ben. Everyone told us Audi would be a big boy and on the day we took him home, Audi weighed 30 lbs. already!

Over the next few months we watched him go through many puppy stages: from chewing walls, toys, and socks, to his gangling stage. But there was always something different about Audi; he bit on the leash or flopped down in the snow, refusing to go for walks. After any amount of exercise, Audi was very stiff and had trouble walking. We took him to our trusted vet and they suspected Audi had signs of hip dysplasia.

When Audi went in to be neutered, his hips were X-rayed. He was diagnosed with severe hip dysplasia at six months old. We were then referred to a vet hospital in Edmonton where, over the next three months, Audi had a triple pelvic osteotomy on both hips. He spent three months on crate rest, had very limited walks, and played many mental stimulation games. Slowly but surely, Audi began to recover. He was soon able to run around the park with his friends, go swimming in the ocean on our trips to Victoria, go for long walks with his parents, and have the occasional  ice cream cone.

This year, Audi has passed the Canine Good Neighbour test, received a medal from the Dock Divers competition, participates in the Paws for a Cause annually, and is training to be a St. John’s Ambulance therapy dog. Audi is a master of ‘shake a paw,’ lover of cheese, and dances with his mom on Friday nights.

Fast forward five months and Audi now has a little sister puppy named Arlo who is a rescue from Northern Alberta (see picture). They even look alike! Each and every day, Audi and Arlo are playing together, snuggling with each other, and living life to the fullest. I am thankful for every day that I get to spend with all my fur babies.

What an amazing story. We are unbelievably happy that you were able to not only help Audi with his hips and restore him back to full health, but that you have raised him to become a dog with so many achievements and community involvement under his collar. All the while, giving him the joy in life that he deserves. Thank you so much for all that you’ve done for Audi and your growing family of fur babies. As an adopter, you belong in our Hall-Of-Fame, for always choosing adoption first. Hercules was surrendered into the care of the BC SPCA North Peace Branch in September 2010 when his owners were moving and unable to take him with them. He was a very handsome American bulldog who was only about six years old at the time. A sweet boy who just needed a stable home environment, …