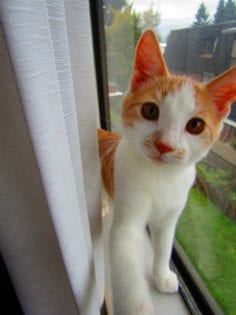 Crognard came into the care of the BC SPCA when he was surrendered by his previous family. He was part of a family of cats that his previous owner could no longer care for.

Crognard travelled from the Kamloops Branch, to the Surrey Branch and finally to the BC SPCA Port Coquitlam Education & Adoption Centre where he found his forever home. One year later, his guardian family has sent in this wonderful update:

We got Crognard in August of 2016 at the Port Coquitlam SPCA. Although we were still grieving after our late cat Mishko, we felt like we needed a new furry family member. Only this time we decided on adopting a kitten instead of getting one in the pet store.

It took us some time before we saw Crognard’s and two other kittens’ photos on the BC SPCA website. Once we arrived to the shelter and met the kittens, it felt like Crognard (the loudest one) was somehow right for us. He wasn’t scared or shy in adapting to his new home. We decided to keep the name he was given in the shelter, but we call him Crogy or Crog.

Last week we celebrated his first birthday. He grew up to be a very handsome boy. He is very playful and still very vocal but at the same time very affectionate.

It gives us so much happiness when he sits on our lap and purrs. We had to work on his biting while playing with us, but he’s adjusting and getting better in controlling his bites. Crognard is a busy and very curious and smart cat.

We are so happy to have him in our lives.

Thank you to Crognard’s guardians for making adoption their first option and for choosing to adopt from the BC SPCA! Looking for a furry pal? View who is available for adoption at spca.bc.ca/adopt. 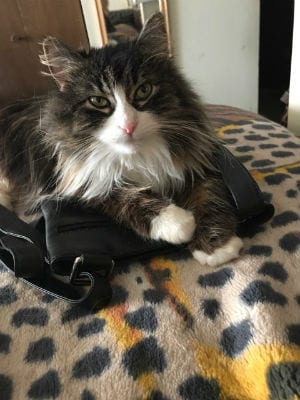 Sofi came into the care of the BC SPCA in 2010 as a stray. After a short stay at the BC SPCA Williams Lake & District Branch, Sofi was transferred to the BC SPCA Port Coquitlam Education & Adoption Centre through the Drive for Lives Program in search of her new home. Over seven years …