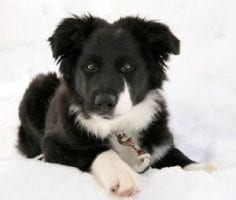 Lucy came into the care of the BC SPCA Trail Branch in January 2009 when she was just a young pup, living in precarious circumstances. She was promptly sent into foster care and, by chance, her adoptive family met her here. Seven years later her family has shared this update on Lucy:

One evening in early 2009, my husband and I took a walk downtown and came across a friend of mine who happened to be fostering a beautiful border collie puppy, Lucy. Lucy had come into the BC SPCA Trail Branch with her mother and two siblings; they were found at the side of the highway in a nearby town, and someone had rounded them up after seeing them frequently. This puppy had been the last one rescued from that situation, and my friend did not want her to be left in a kennel alone on her first night, as her mother and siblings had quickly been adopted.

It was love at first sight for me – the moment I picked Lucy up, she snuggled into my neck, and I hoped that she would be mine at some point down the road. When I placed her back down on the sidewalk, she made her way over to something at the edge of the sidewalk, and poked at it with her nose; it turned out to be a silver ring. I picked the ring up and later told my husband that it was what would bring Lucy to me eventually; though he wasn’t thoroughly convinced that we were ready to adopt a puppy, he knew that it was important for me to have a companion.

The next day, I called my friend and asked her if she was just fostering, or if she was hoping to adopt. At that point, she wasn’t sure, but was going to see how things played out between her dog and Lucy. I called the BC SPCA to ensure that we could have first dibs on her if my friend chose NOT to adopt her, and kept my hopes up. I had been looking for somewhere to volunteer, and signed up at the BC SPCA Trail Branch as a volunteer dog walker, photographer and socializer. After a couple of weeks, my friend had still not made a decision as to whether or not she was going to adopt Lucy, and I was feeling more and more heartbroken. The next day, my friend called to tell me that she had made the decision to let Lucy – now named Lily – go; having two medium-large dogs in her house was not working out. You can imagine my excitement after that call! We officially adopted her in February 2009.

One of the reasons I was so desperate to adopt a young dog was that we had a 15-year-old keeshond/pom cross named Sasha; she was such a loving dog, but had developed some age-related issues, and we knew we would have to say goodbye to her in the near future. Living without a dog was not an option for us; my husband and I both had dogs most of our lives, and we loved them. Lily brought Sasha back to life for another eight months; Sasha loved the company (though she didn’t appreciate sharing her bed), and we saw her revert to puppyhood again many, many times. We took the two dogs on camping trips in B.C. and down the Oregon Coast, and watched the two of them race around on the beaches; we had not seen this type of activity out of Sasha in a very long time. When the time came to let Sasha go, Lily grieved for several weeks.

From the start, Lily was fearful of cars and trucks – parked OR moving – which was expected after living beside a busy highway, but we gradually helped her realize that she was safe. She wasn’t bothered by fireworks or other loud noises as a puppy, but is now terrified of anything creates a loud ‘bang’… especially thunder, fireworks, and gunshots. She is a typical border collie in many ways, e.g. when a ball was introduced, it meant you would have a committed game of throw and retrieve for at least 20 minutes. When a group of us go walking, Lily ensures that we all stay together, and can almost be seen ‘counting’ the number of people in our party. She has the typical ‘border collie stare’ when she wants or needs something; there is never a question as to when it is time for breakfast or dinner…she will stare, and then get very vocal, eventually herding you over to where the dog kibble is kept.

We have done basic agility training and nose-work training, and Lily loves both; when we leave her alone at home, we hide several small treats around the house, then tell her to ‘go search’ as we head out the door. You can see the anticipation in her as she works her way around the kitchen, dining room and living room. Her claim to fame is the hot dog eating championship at Paws for a Cause….being food motivated has its rewards! Friends have asked us why we speak to her in sentences, and my answer to that has always been ‘because she understands sentences.’

I can’t imagine our life without Lily. I have struggled with chronic pain for 30+ years, and the last 10 years have brought some increased challenges, and my beautiful girl makes life so much easier. She is non-judgmental, there for me on the days when I need a gentle walk or a good cry, and by my side every moment that I spend outside in the yard or on our local trails. She spends a month with us in Moab, Utah every year, hiking through the desert, chasing lizards, and swimming in the creeks. She has camped all over B.C. and down the Oregon Coast on many occasions, hiking and biking on the trails, and chasing seagulls, kites and balls on the beaches. She has snowshoed miles with us every winter, and loves to roll on the snowbanks after every fresh snowfall. Lily is one lucky dog, and we are one lucky family.

Thank you for letting us know how well Lily has been doing in her forever home. We are so grateful that you chose to make adoption your first option. 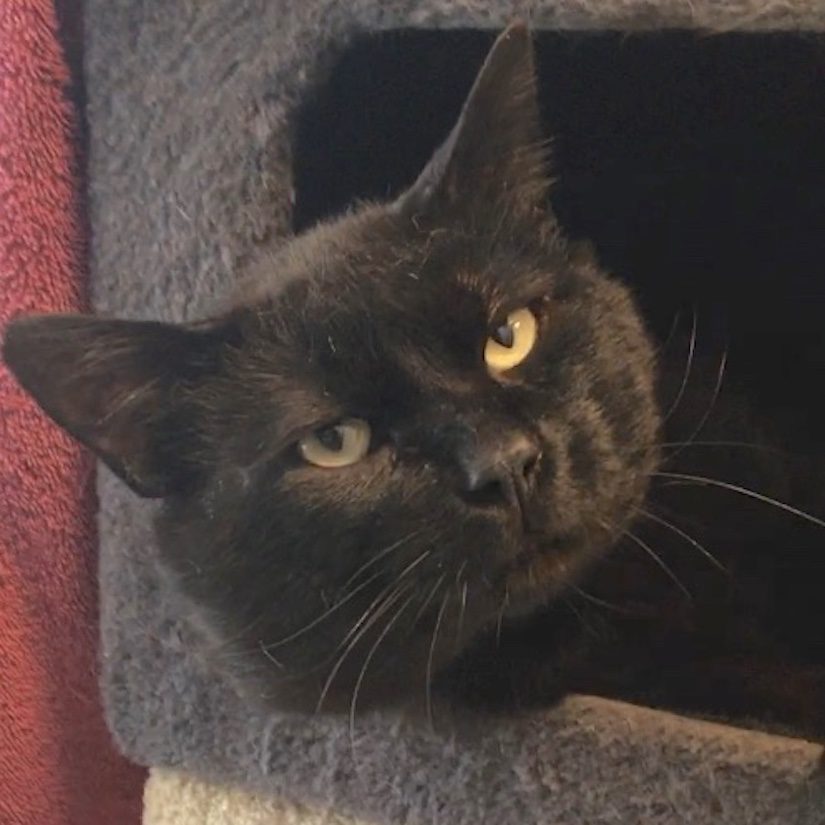 Sometimes when we have to say farewell to our long-time feline friends, we make ourselves believe that we can get by without another one. Who are we kidding? For a lot of us, our lives never quite feel right without a kitty’s presence. For Jennifer and her family, it was only a few months before …