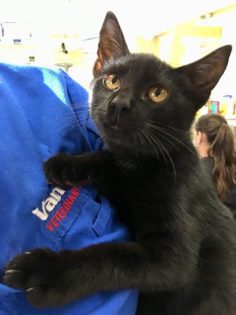 Often animals with special needs get overlooked for adoption in favour of an animal that is perceived to be “normal”. However, special needs animals have a lot of love and personality to offer adopters. Thankfully, not everyone will overlook these diamonds in the rough.

When Kelly learned about the special needs of Kermit, a sweet, black kitten with Swimmers Syndrome, she knew she would give him his forever home. We recently received an update from Kelly:

A year ago on October 31, 2018, I adopted Kermit from the BC SPCA Comox Valley & District Branch.

He was found all alone in the middle of the street late one night a couple of months before. They thought a car had hit him because he was all bloodied and bruised. However, they discovered he has Swimmers Syndrome, which essentially means that his back legs do not function normally.

Despite all the efforts of the staff at Van Isle Veterinary Hospital, he was unable to be fitted for a cart and he was uncooperative for hobbles. This was his fault—he’s a wild child!

Kermit has no hip sockets and the muscles and tendons in his legs don’t contract. He can walk when he really wants to, but I think it’s easier for him to do the “Kermit”. He flies around like an iguana on hot sand. What others see as a disability he sees as an advantage.

Physical therapy helped a bit, but he will never walk like other cats do. He can use his back legs to get into trouble, like when he stands up to lick the bathtub and go into the fridge or dishwasher.

Kermit entered my life when my older kitty, Tank, was diagnosed with inoperable cancer. Tank was my original wild child.

On his first night in the house, Kermit hissed and swatted at my dog Max, who was immediately scared of this tiny kitten no bigger than his paw. I swear the cat looked at me and grinned, knowing the power he was able to wield.

By the third day, Tank was cuddling with Kermit and surely teaching him all kinds of bad habits. A month later, I made the heartbreaking decision to have Tank put to sleep because he no longer had a good quality of life.

Kermit kept our tears at bay with his gregarious antics. I recently had to build Fort Knox into the bunny room to keep the little hooligan out of there. He gets away with so much because he is so darn adorable. I have considered getting a cart for him just to slow him down.

I truly cannot imagine what life would be without Kermit. Different is beautiful. I encourage everyone to look past perceived imperfections and find their own diamond in the rough.

Thank you, Kelly, for adopting Kermit and not being afraid to provide such a loving home for a feline with special needs. We love that he can be his true hilarious self and always keep his surroundings a happy place to be. Your words are inspiring to find the beauty and lightness in something that can look daunting just because it is different. 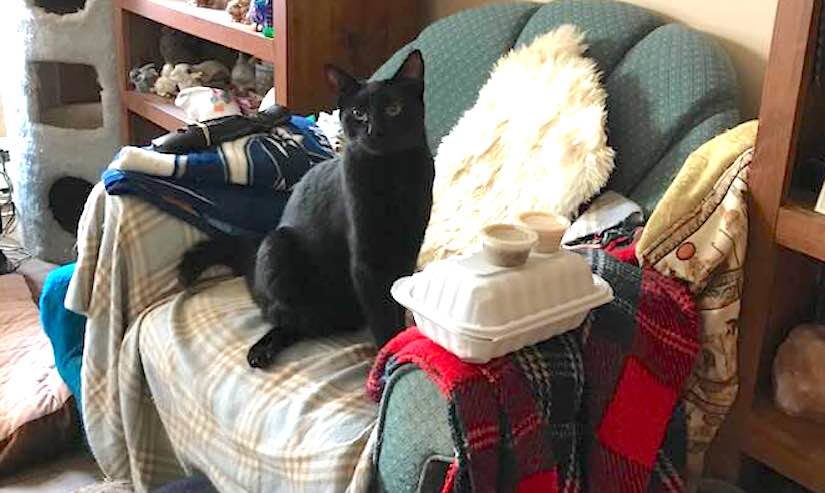 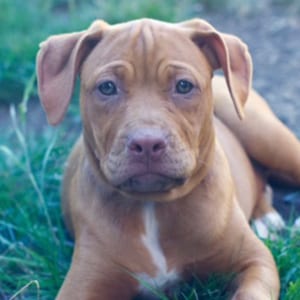 Donna was surrendered to the BC SPCA Comox Valley & District Branch in July, 2016 along with her mom and siblings because her previous guardian had too many dogs and was unable to care for them. Donna was only two months old when she came into our care and immediately we could see what a …