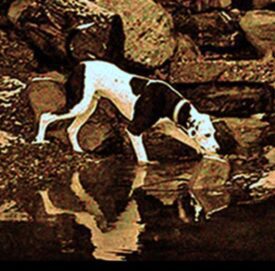 At our 44 BC SPCA animal shelters across the province, our adoption counsellors give a lot of consideration to making the right match between a human and an animal companion in our care. But sometimes, a magic connection just happens without our involvement.

And that’s what happened the moment Buddy and a particular human made eye contact.

Nineteen years after this four-month-old Dalmation cross found his forever home, we received this beautiful letter from his Dad.

It was the day after my birthday. My partner told me we could see about adopting a dog, as I had been bugging him for a year about it.

At the time we were living in Harrison Hot Springs, so we drove to Vancouver (and visited the BC SPCA Vancouver Branch).

I noticed a Dalmation cross looking at me through the glass in the gymnasium training area. It was also where they did doggie day care. 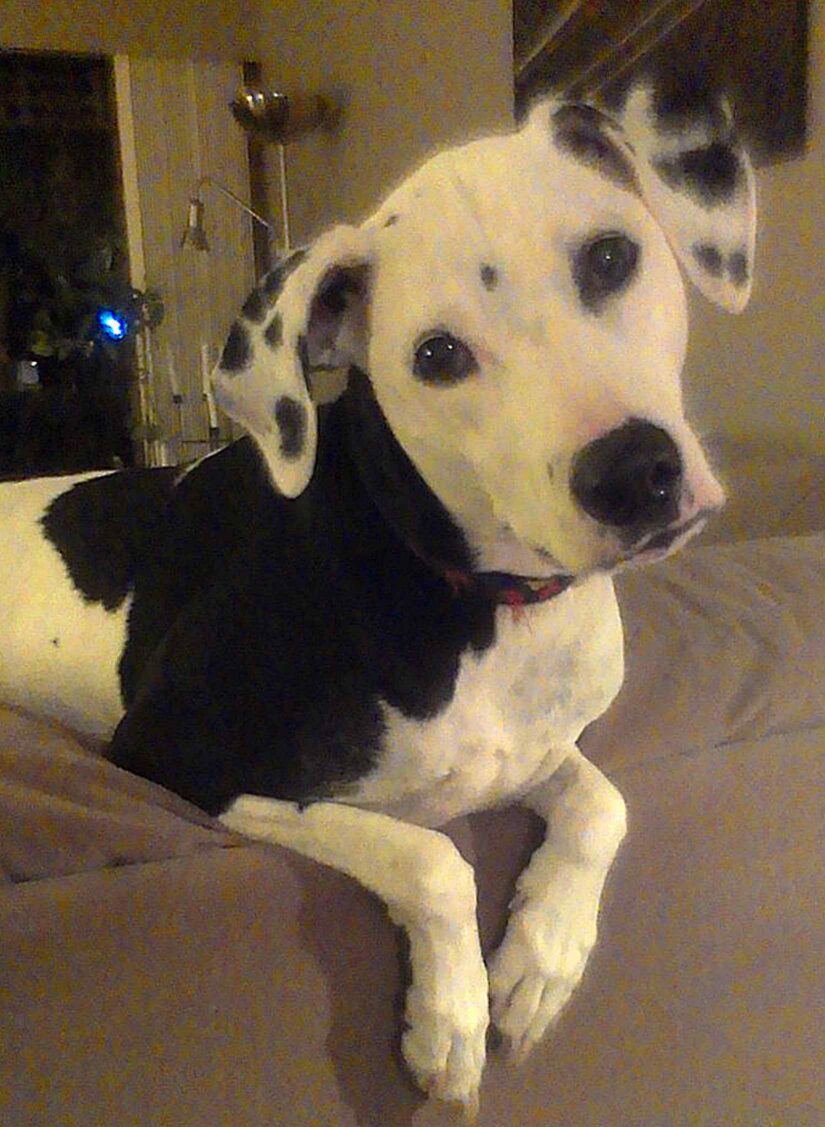 I said at this point to my partner, “It’s too bad that he’s not up for adoption,” as I thought he was just in day care. Well, an employee heard me and said that he was available. Well, that puppy and I had bonded before we could even open the door! 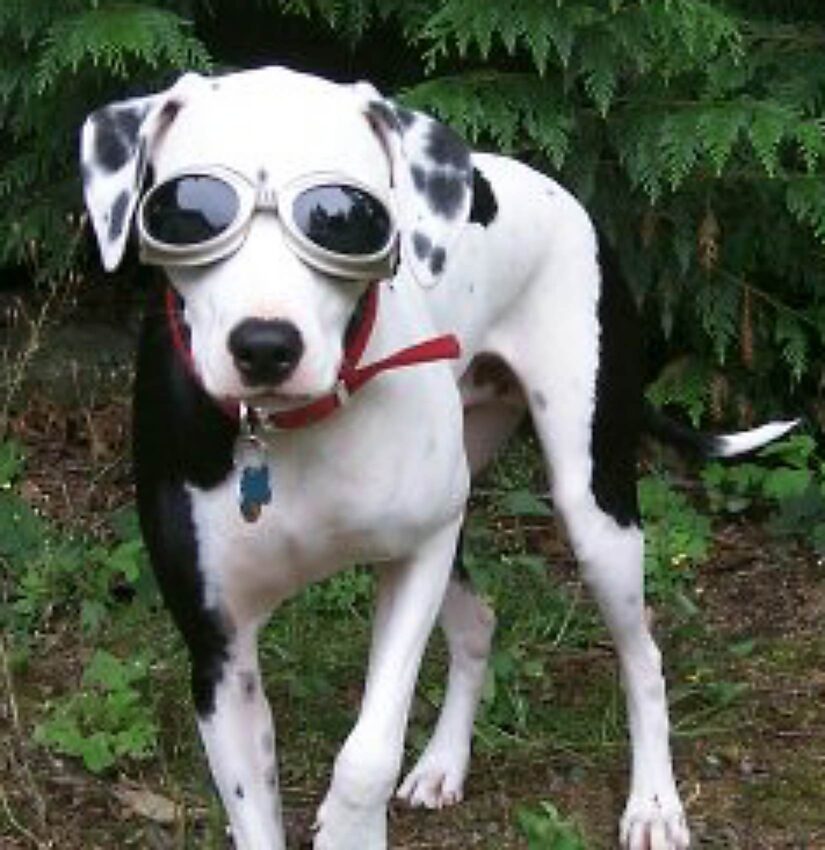 Buddy had separation anxiety from his early life experiences and never, I mean never, left my side. He always needed to be aware of where I was and followed me around everywhere.

He was not an outdoor dog, not even in summer. I built him a dog house. That was the one thing he chewed, until it was scrap wood. At night he slept in the bed under the covers and in between us. When on his own bed he slept with all four legs straight up in the air. 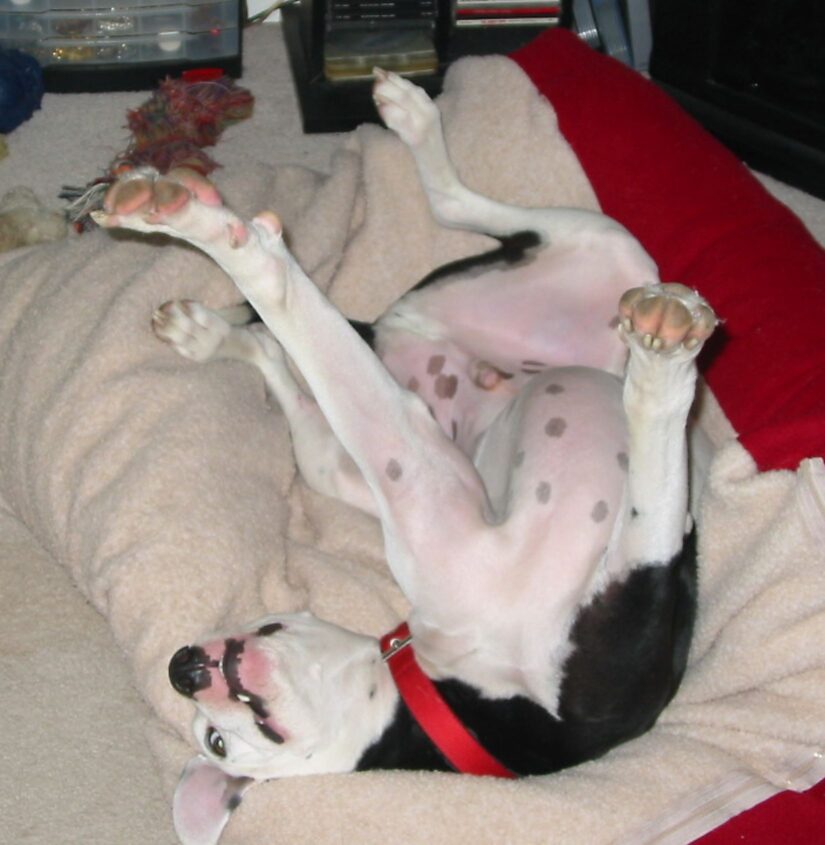 Buddy had tons of energy, was very smart. He never took things off counters or tables or chewed anything that was not his. Not even one shoe ever suffered from his teeth. The only exception was if he was ticked at me, he would find a single item and chew the heck out of it right where I would find it immediately, at the front door.

If I had to discipline him and he was sent to his bed he would start with the eyes, so sad. Then he would walk really slowly toward his bed, stopping and looking back. When he realized I was not going to change my mind he would get on his bed, do two circles, flop down (with his back end facing me) and turn his head and look at me as if to say, “I can’t believe you sent me to my room,” take a deep breath and exhale so I could hear it and put his head down, pouting, still watching for me to say, “It’s ok.” 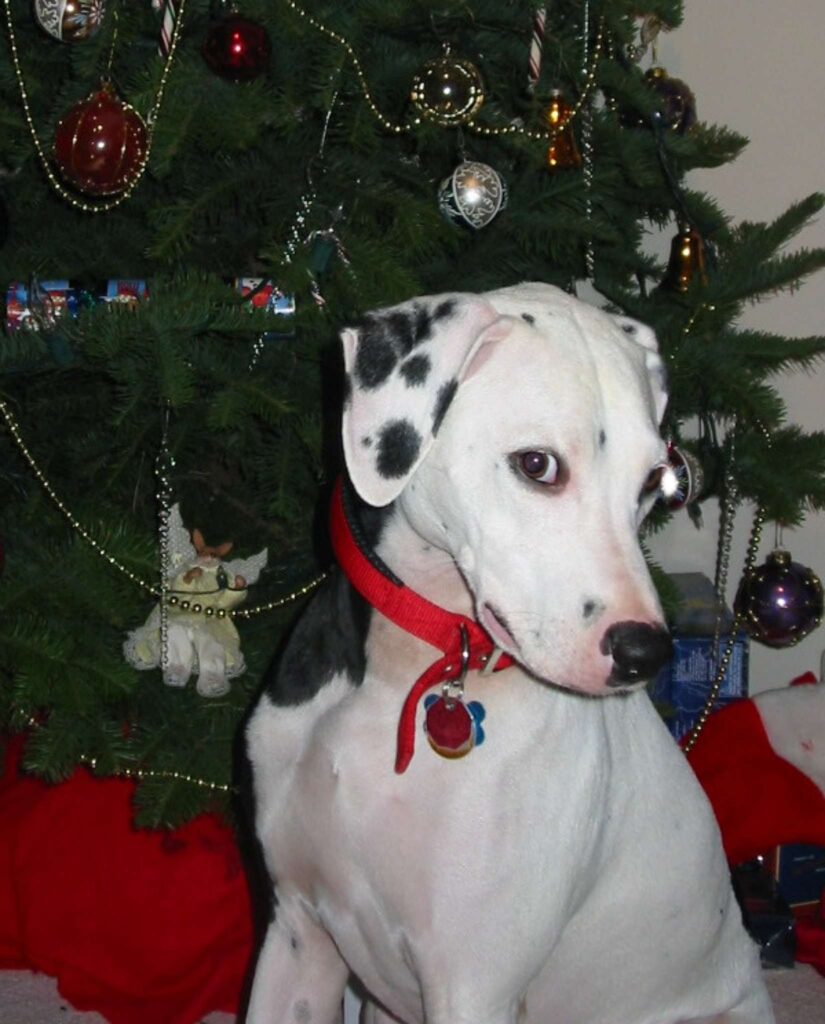 Buddy was very healthy his whole life and never had a need for a vet visit other than for his regular shots and checkups. I allowed him to have a little taste of everything I ever ate. He peeled grapes and shelled peanuts. Toward the end of his life he had arthritis in his hips, was pretty much deaf and nearly blind.

One night we had gone for his last walk for the day and I noticed he seemed very confused. When we got back inside, he walked around in a couple of circles and collapsed on the floor. I went to him and held him as he slipped away.

I was always afraid that I would not be with Buddy when his time came. I am so glad I was there to comfort him, even though it felt like my heart was being ripped from my chest! That was on January 8, 2019. He would have been 18 years old on his birthday the following month.

BUDDY
February 2001 – January 2019
My friend. My companion. My child!
Love you and miss you always
Forever in my heart
Dad

Oh, what a wonderful, full, long life you gave Buddy. He clearly enriched yours in return.

Thank you for making adoption your first option. If you ever feel ready to make room in your heart for another darling, there is always one waiting for a home like yours. 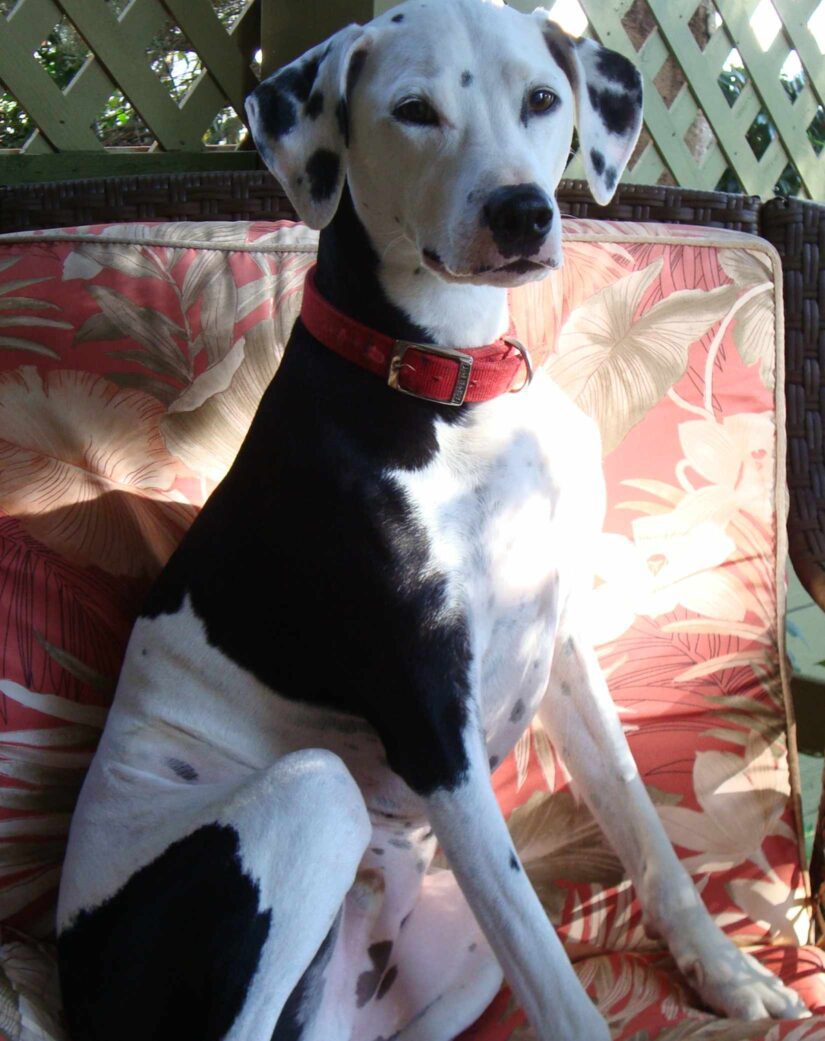 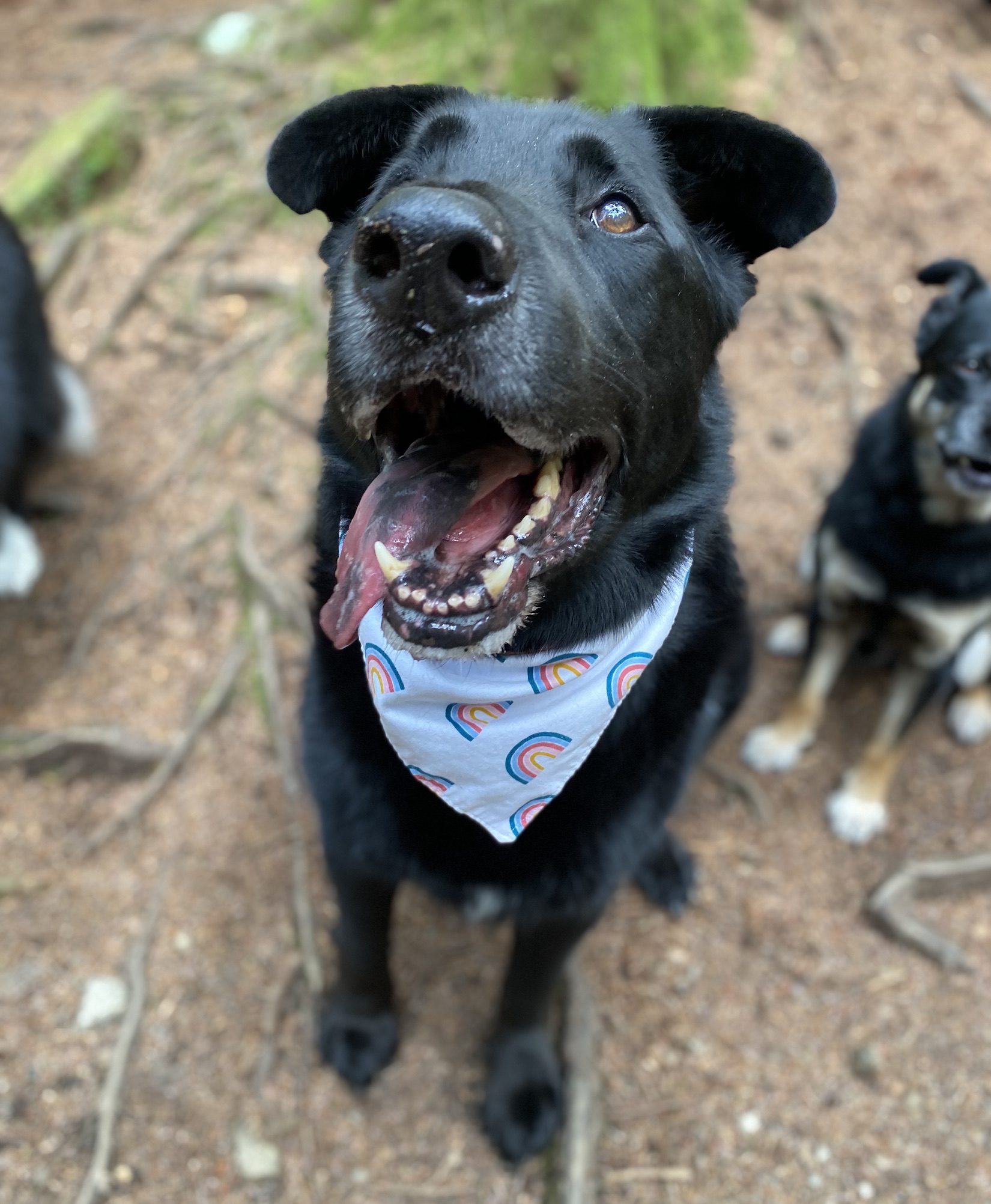 Nothing warms our hearts more than finding a family who is truly the perfect fit for our adoptable animals. Back in June 2011, Sidney had already been in our care at the BC SPCA Vancouver Community Animal Centre for some time. We couldn’t understand why no one had shown an interest in adopting him. Then, …