What do you do if you see a bear?

Seeing a bear from a safe distance can be a thrilling experience, but what do you do in a surprise encounter with a bear?

Bears are omnivores that eat mostly berries and fish. Their habitats often overlap with ours in places like parks, resorts, hiking trails, or simply our backyards. Bear attacks are very rare – most of the time, they are happy to go unseen by people and will move along on their own. They can lose their healthy fear of people if we’re not careful with our food and garbage, or they may feel threatened if people come too close to their babies.

If you run into a bear in the wild or in the city, remember to:

Mother bears are protective of their young, so do not approach a baby bear, as mom will be watching from close by. Never try to out-run a bear or climb trees to escape.

Read more about living with bears in B.C.

B.C. is home to two kinds of bears – black bears and grizzly bears. Despite their name, black bears can be black, brown, silver, cinnamon or even white (called “Kermode” or “spirit” bears). They are adept tree climbers with large ears, short claws, a long nose, and don’t have a shoulder hump like grizzly bears. Black bears are the most common type of bear near B.C.’s largest cities.

Grizzly bears are sometimes called brown bears, but they can also be black, brown, or blond. They have relatively small ears, long claws, a dish-shaped face, and have a distinct shoulder hump. Grizzly bears generally live in rural and remote areas of B.C. and thrive in undisturbed habitats.

Wild ARC shop is back! 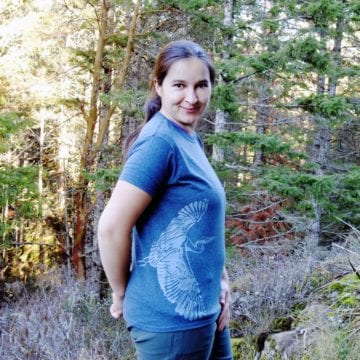 Check out our online pop-up shop for clothing, accessories, gift certificates and more