Take a Paws | BC SPCA

As a PAW Plan monthly donor you ensure abused, abandoned and injured animals like Markus get the help they need, when they need it. Here are just a few of the ways that your generosity made an impact in 2017…

This past summer thousands of British Columbians were affected by the wildfires that tore through our province. Both people and animals were displaced as the fires raged. Our special constables were allowed behind evacuation lines to care for and rescue animals left behind and we provided emergency shelter for animals. We saw many stories of human and animal resilience, including a scared dog who escaped from his yard and was found running around an evacuated Williams Lake.

Special constable Cristie Steele brought this relieved dog to a local vet clinic, where he was scanned for permanent ID. Thankfully he was microchipped and was happily reunited with his guardian, a firefighter who had been working long hours fighting the wildfires.

Your generosity rescued and cared for many animals left behind, and provided emergency shelter for those made homeless. Your compassion made a huge difference during a traumatic time.

Your support helps animals like Lady, Cowby and Piers, three orphaned baby river otters. “When Lady from Ladysmith, Cowby from Cowichan Bay
and Piers from Piers Island arrived their eyes hadn’t even opened yet! But now, thanks to amazing supporters, all three of them will be released back into the wild this spring.” shared Dr. Sara Dubois, chief scientific officer.

Your passion for animals has saved these otters and will help many more orphaned and injured wild animals.

Can you imagine the veterinary costs for 26,700 animals? Every year nearly $7 million is spent on providing health checks and critical medical care to the animals who arrive to BC SPCA branches. And this expense will undoubtedly continue to rise as the medical and behavioral needs of the animals coming into our care become more complex.

Thank you for giving the animals in need a chance to start their new life strong and healthy, and in many cases literally saving their lives. 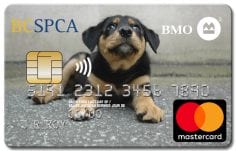 How you can help more animals

It takes just one easy step for you to save even more animals: making your generous donations and other purchases with a BMO® BC SPCA Mastercard®*. For every dollar spent, BMO makes a contribution to the BC SPCA at no cost to you – and you still earn rewards. Cardholders have raised over $1.5 million for animals! Join them by applying today at bmo.com/bcspca