Wildlife feeding can lead to more harm than good - BC SPCA

Feeding wildlife can seem like an enjoyable way to connect with nature. After all, what harm could there be in offering a peanut to a squirrel or tossing a handful of bread to some ducks?

“You’d be surprised!” says Meghann Cant, animal welfare educator for the BC SPCA. “Wildlife feeding is always risky – even for animals like squirrels and ducks.”

However tasty, human foods are no substitute for the natural foods that wild animals have evolved to eat. “Lots of animals like sugar, salt and fat, just like we do,” says Cant. “But eating human foods unbalances their diet and can even rot their teeth.”

Because of all the packaging involved, animals who root through garbage are also at risk of ingesting plastic or glass accidentally, or becoming stuck inside jars or bottles, which can be deadly.

Wild animals do not normally gather together in large groups. But when they are all attracted by food to the same spot, they can be found in unnatural numbers. “This encourages disease spread,” says Cant. “Not only between animals, but to us and our pets as well.”

The crowding and competition also increase the chances of fighting and injury among animals.

Normally, wild animals have a healthy fear of humans. “They like to keep their distance, which is a good thing,” says Cant. “It keeps us both safe.” When food is involved, however, animals are more willing to approach people and, over time, lose their natural wariness. “They become much less afraid of us – with serious consequences,” says Cant.

Being unafraid puts wildlife at risk of getting hurt or killed. “They’re more susceptible to predators and vehicle collisions,” says Cant. “They’re also vulnerable to harm from individuals who see them as a nuisance.” It also puts people at risk. As food-seeking animals become bolder, they can begin breaking into vehicles or buildings, and threatening people with aggressive behaviour.

“Unfortunately, this loss of fear has an impact beyond just the individual animal being fed,” says Cant. When mothers bring their babies to their favourite feeding spots, it can teach the young ones that humans are not to be feared. Growing up on human foods, they can also lose the ability to find food on their own in the wild.

The take-home message? “More often than not, wild animals end up paying for our bad habits,” says Cant. “So, for everyone’s health and safety, please don’t feed them!”

For more information and tips on managing food attractants, check out our handy “Don’t feed the animals!” (PDF) brochure. 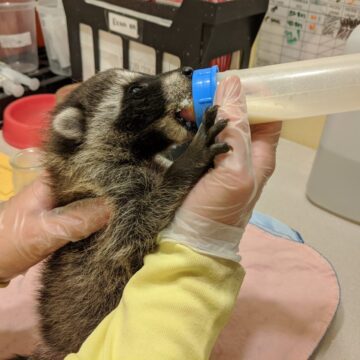 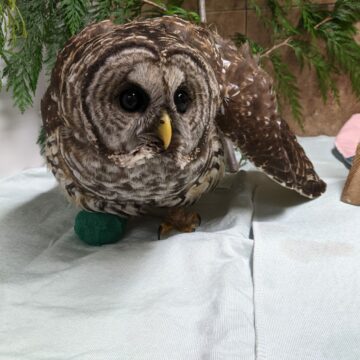 Sponsor an enclosure to help wild patients get the highest quality of care possible.