A recent grant from PetSmart Charities™ of Canada will go a long way in addressing the province’s cat overpopulation crisis in Cranbrook. The $83,957 grant will go toward spaying and neutering 950 cats in Cranbrook and surrounding areas this year, both owned cats as well as free-roaming felines in four colonies. 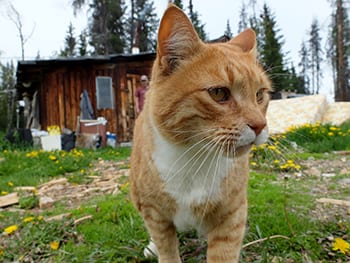 “This grant from PetSmart Charities™ of Canada is fantastic news for Cranbrook! We have a constant intake of cats into our shelter,” says BC SPCA East Kootenay Branch manager Brenna Baker. “There isn’t a day that goes by that we don’t have a waiting list of cats to get into the shelter, looking for loving, forever homes.”

A major focus of the BC SPCA’s five-year Strategic Plan is addressing B.C.’s massive cat overpopulation problem, as tens of thousands of outdoor cats are left to fend for themselves outside, suffering from illness, injury, starvation, predator attacks and more. Cranbrook has a large population of outdoor-living cats, and the grant will go toward sterilizing cats that would otherwise be left to reproduce, as well as assisting families and individuals who are unable to spay or neuter their pet due to financial constraints.

“One female cat and her offspring can produce more than 200 kittens within one year,” notes Baker. “The grant allows us to move forward and make a big difference in the region.”

Last year, 754 animals entered the care of the BC SPCA in Cranbrook. Of those, 523 were cats or kittens, and 256 of those kittens were from unwanted litters.

“It takes the whole community to tackle such a large issue, and we couldn’t do it alone,” Baker says, adding that in addition to PetSmart™ Charities of Canada, the BC SPCA is grateful to Steeples Veterinary Clinic, Tanglefoot Vet, Kootenay Vet Clinic, Cranbrook Veterinary Hospital, B-104 Total Country radio station and the City of Cranbrook.