As a puppy, Knox suffered from neglect and chronic health issues. With your help, he has become a healthy, happy dog who regularly takes top honours at competitions for his extraordinary scent-tracking skills. We are proud to announce Knox as the official spokes-dog for the BC SPCA 2018 Paws for a Cause, presented by Hill’s® Science Diet®.

A lovingly smart mixed-breed, Knox came into the care of the BC SPCA Chilliwack Branch as a rescue puppy. At a very young age Knox had a severe skin condition called demodectic mange that caused extreme hair loss, inflammation and discomfort, making it nearly impossible for him to exercise and socialize like other puppies.

Because Knox was restricted to play due to his condition, he developed some reactivity to certain triggers. His glowing pink skin would only improve if stress levels were reduced which meant Knox needed to find the right care and treatment immediately.

Knox’s owner, Nicole Tai, says she first met Knox when she donated blankets and towels to the BC SPCA. She says, “After taking him for a walk around the neighbourhood, we were sold.” Soon after, they adopted Knox into his “fur-ever” home.

After four years of loving care his personality is shining through and his fur has turned into a beautiful black and white coat. When Nicole looks at Knox today, she sees a much different dog. “Though we struggled at the beginning to manage Knox’s dog reactivity, after lots of training and cheese, he’s come a long way from the rambunctious puppy he was four years ago, to the scent detection ribbon-winning, chill companion he is today.”

Despite former neglect and discomfort, Knox is a brilliant example of how resilient animals are. In fact, Knox is more active than ever. He is training to be a Sporting Detection Dog and has been awarded for his exceptional ability to sniff out hidden target scents while alerting his owner. Nose work is serious business!

Join Knox and thousands of other animal lovers this Sept. 9 at the Paws for a Cause walk, presented by Hill’s® Science Diet®. Every dollar raised will help us rescue and care for abused, injured and abandoned animals and work to prevent cruelty before it occurs. Make your next walk count, register today!

For $5 off use promo code EARLY before July 15

How your fundraising helps animals

For every dollar you raised in 2017, here is how you helped animals. Together we can do even more in 2018! 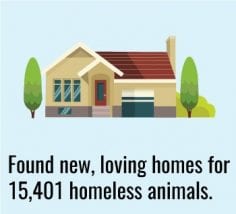 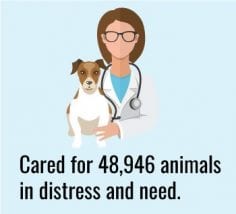 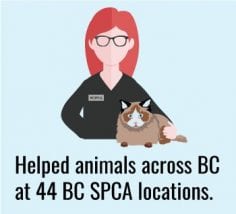