The BC SPCA has begun construction of a new state-of-the-art Community Animal Centre in Nanaimo to care for the region’s most vulnerable animals. A ground-breaking ceremony was held on Tuesday, Sept. 1 for the new facility, which is being built on an 11.9-acre property at 154 Westwood Road. The $3.4-million, 7460-square-foot facility is being funded through the generosity of the provincial government, the City of Nanaimo and SPCA donors. 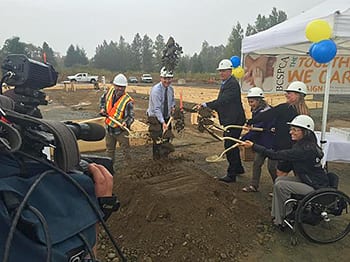 Those in attendance at the ground-breaking included the Hon. Michelle Stilwell, B.C. Minister of Social Development and Social Innovation, Nanaimo Mayor Bill McKay and city councillors, BC SPCA chief executive officer Craig Daniell, members of the BC SPCA Board of Directors and other local dignitaries.

“We are extremely excited about the new centre and are grateful to the provincial government, the City of Nanaimo and all the generous animal lovers who are helping us make this urgently needed facility a reality,” said BC SPCA CEO Craig Daniell. He noted that new building will incorporate modern designs to ensure the highest levels of health and welfare for animals, including shared “apartments” for dogs to encourage natural movement and socialization, communal indoor-outdoor areas for cats, designated areas for temperament and behaviour assessments and specialized isolation areas for sick and injured animals. The centre will also have multi-purpose space for SPCA youth camps, workshops and other events for the community.

The BC SPCA’s Nanaimo & District Branch has been serving animals in need for more than 40 years, caring for more than 1,300 neglected, abused and homeless animals each year and offering a wide range of outreach, education and advocacy programs to promote the welfare of animals. 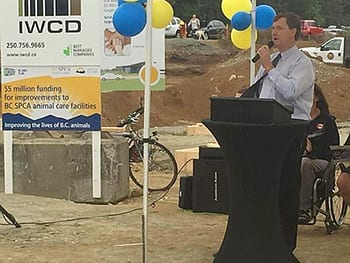 BC SPCA Nanaimo & District Branch Manager Leon Davis says that in addition to providing a safe haven for animals in need of sheltering and emergency care, the new facility will serve as a resource for pet guardians in the community and will be a transfer hub for Vancouver Island to ensure that vulnerable animals from more remote areas of Vancouver Island can be transported to SPCA shelters for treatment, care and adoption.

Funding for the Nanaimo Community Animal Centre includes $1.3 million from the provincial government. The government announced $5 million in funding earlier this year towards the BC SPCA’s $50.4 million, eight-year Facilities Development and Service Plan to replace aging SPCA shelters in 10 B.C. communities.

“There are so many ways that people can become involved in this initiative, including donations, gifts in kind and volunteer support,” says Davis. “If anyone is interesting in helping, I encourage them to contact me at ldavis@spca.bc.ca.”  A “Together We Care” campaign has also been launched to support the new facility. If you can help, please visit spca.bc.ca/togetherwecare.