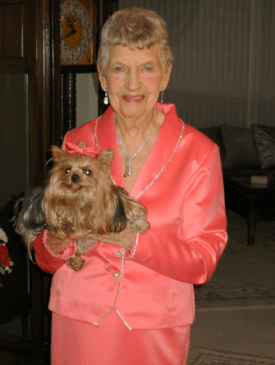 Ursula Pauline Thomas (nee Hills) passed away February 11, 2019. Born in Victoria on January 25, 1921, Ursula was the youngest in a close-knit family who predeceased her, as did her beloved husband, Hugh O. Thomas. Ursula earned a Licentiate of the Royal School of Music and performed as a solo pianist and accompanist with the CBC; many fans will remember her as ‘Paulie’ on their School Broadcasts. While teaching singing, organ and piano at Jericho Hill Provincial School for the Blind, Ursula established, directed and accompanied Canada’s first blind children’s choir. She was the official Accompanist for the Vancouver School Board and was appointed Adjudicator for choral and instrumental competitions held across B.C. Ursula also accompanied tenor Richard Margison during his formative years. Ministry through music characterised Ursula’s commitment to worship as Music Director and Accompanist with church choirs in Vancouver (Chown Memorial United, Dunbar United) and Victoria (Metropolitan United, First United, St. Luke’s Anglican, Cadboro Bay United, St. Paul’s United in Sidney). Ursula was also Staff Organist and Music Director at McCall Bros. Funeral Chapel for more than 20 years. Community performers in Vancouver (The Clef Society of Burnaby, Kiwanis Glee Club of Vancouver, Theatre Under The Stars) and Victoria (A Cappella/Crystal Singers, Arion Male Voice Choir, Summer Singers) benefited from Ursula’s adroit accompaniment at rehearsals and in concerts held in B.C. and the U.S.A. In 2009, the British Columbia Choral Federation presented Ursula with The Joyce O. Maguire Award, in recognition of her outstanding long-term service as a choral accompanist. In 2011, Ursula received a Life Membership from the Arion Male Voice Choir, which she had accompanied for more than 25 years. Ursula (Ursie) was a gifted musician, composer and poet with a quick wit and warm heart. She will be sorely missed by her extended family of friends.