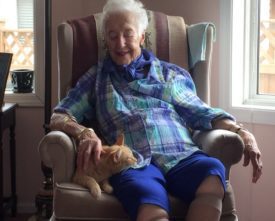 Phyllis Vincent first met her best friend Mango in April 2014 at the Penticton SPCA. Phyllis had decided to adopt a cat as her beloved sheltie had died a year before, and she was still missing him. Mango’s situation, however, was complicated. She was recovering from the trauma of a hoarding experience. So Phyllis decided to wait on adopting a pet. Then, in September of the same year, Phyllis returned to the SPCA.

To her surprise, Mango was still there. She had become more socialized thanks to the work of a devoted employee. Phyllis adopted her on the spot, knowing she could not leave her this time. It was a match meant to be. 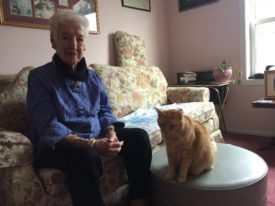 The first two weeks at home, Mango spent her time hiding under the bed and only venturing out to eat or use her litter box, a behaviour common to animals from hoarding situations, as they have not had proper socialization with people. But just when it seemed that Mango would never get used to Phyllis’ home, she started exploring the rest of the house. Over the next five years, Mango and Phyllis developed a tremendous bond that was a mutual boost to their well-being. Mango began to enjoy cuddles from visitors, and loved playing and running throughout the house.

Mango’s favourite place was snuggled into the chair next to Phyllis. She and Phyllis would often have “talks”. Of her beloved Mango, Phyllis was often heard saying “She’s a dear little thing,” and “Who would have thought I would love a cat so much?” It was a mutual rescue, and when Phyllis died in September 2019, Mango went to live with Phyllis’ family physician. With her learned social skills, she is no doubt gracing her new forever home!

Thank you so much, Phyllis, for giving Mango a wonderful second chance at life, and for thinking of thousands animals like her by leaving a gift in your will to the BC SPCA.