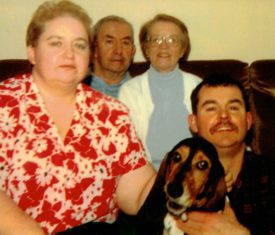 Alan was born in Rossland, British Columbia and lived the majority of his life in the Lower Mainland. He is pictured here with his sister Francis, his parents Eugene and Hazel, and his dog Brie. Both Alan and Fran were animal lovers, with Fran being very active for many years in assisting their local vet and rescuing injured raptors while she lived on Haida Gwaii. Although Alan is sadly missed, it is heartening to know that his family’s legacy of helping injured, sick and abandoned animals will endure for many years. Thank you so much for your compassion, Alan!