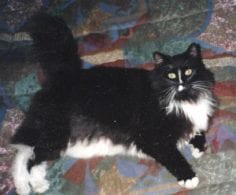 Queen Felicia came into the care of the BC SPCA sometime in 1999. She lived a long life with her adoptive guardian, and in memoriam, her guardian has kindly shared these beautiful memories of her animals, including Queen Felicia:

When I woke up on December 12, 1999 I had no idea what was in store for me that day, however, I do think my Guardian Angel was involved.

In the fall of 1998 and the Winter of 1998-1999 I had to put three animals down within four months. They were older but very much loved. They were: Ubu, a beautiful blue-eyed Husky-Collie Mix; P.B., a gorgeous Ginger Tabby; and Tuff, a pure white, blue-eyed deaf cat.

All the animals had picked me and they have their own stories. I still had P.B.’s brother, Thomas  and in April 1999 we got Cindy, a German Shepherd-Collie mix who was 10-years-old when she came to us.

Then Thomas got sick in the fall of 1999 and also had to be put down. It was very hard for me (and still is) when I saw one animal after another getting older and seriously sick and I told my husband that I would not have any other cats. I could not deal with all the sorrow that followed when these fantastic animals had to be put down. So now we are coming to December 1999. I told my husband that I one day wanted to take all the cat stuff (bedding, food, dishes, cat litter etc.) and give it to the BC SPCA. So we loaded up the car, took Cindy Dog with us and went to the BC SPCA Richmond Branch and unloaded all the cat stuff. We were just on our way out when I got this strange feeling that I had to just look at the pussycats that were up for adoption.

I had hardly opened the door when Queen Felicia threw herself against the top cage wall opposite of the door and she rolled and she meowed and I am quite sure that it meant “pick me, pick me”.

They had lots of cats and kittens there at the time, but they just looked at me. The staff told me they were very happy that I wanted her, for she was two or three years old and most people wanted kittens or definitely younger cats.

She was also black, and some people are afraid of black cats. She had been there a few months already with an unknown history. We took Queen Felicia home, but we  had to stop on the way to buy food etc. and replace and all the things we had just donated to BC SPCA.

It meant a lot to me to have these two beautiful, affectionate animals in my life. I went through a very tough time with my husband getting worse and worse with Alzheimer Disease. I am sure I would have been close to a breakdown myself, but Cindy and Queen Felicia were there for me and helped me through each day. So one day in the early 2003, Cindy had trouble getting up in the morning. I was going to take her to the vet when I came home from work, but at 2 p.m. my husband phoned and told me that Cindy had died while she was laying in front of the fireplace.

I took Queen Felicia down to Cindy Dog and showed her. She went around Cindy Dog and sniffed and then she went upstairs and hid in a closet for the next three weeks. She did not want to come out, she was definitely in mourning. A year after Cindy Dog died, then my husband also passed away.

After that, it was just Queen Felicia and me. She definitely helped me through the next  years, when I came from work she was right there when I opened the door. When it was time to go to bed she was right there to lay down right on my arm. She `talked` a lot and it was a very difficult time for me when I had to put her down in February 2015.  She had got cancer and it had spread, so I had to do what was best for her.

I was so lucky, for my veterinarian and her assistant came home to me to put Queen Felicia  down and it was a relaxed time even though it was very sad. Queen Felicia sat quietly on my lap for a long time while the three humans were reliving stories about our great memories of Felicia before the final injection was given to her.

This is a long story, but it is one that gave me more than fifteen years of great happiness and help during the difficult times. Even if she is not alive, she is still alive in my heart and all the memories will always be there and they still help me when things may be difficult.

I do not have any animals right now, and it is strange after having had the most fantastic animals for more than forty years. I do, however, get a smile on my face and feel happy every time I see a dog, cat, bird or any other animal whether it is out in the free or on TV, so I am very, very, lucky to have the experience I have had with my wonderful animal friends.

Thank you so much for your story and for all the loving care you gave to Queen Felicia and all of your other animals over the years, even through the difficult times. It has shown the happiness that can come when people make adoption their first option. 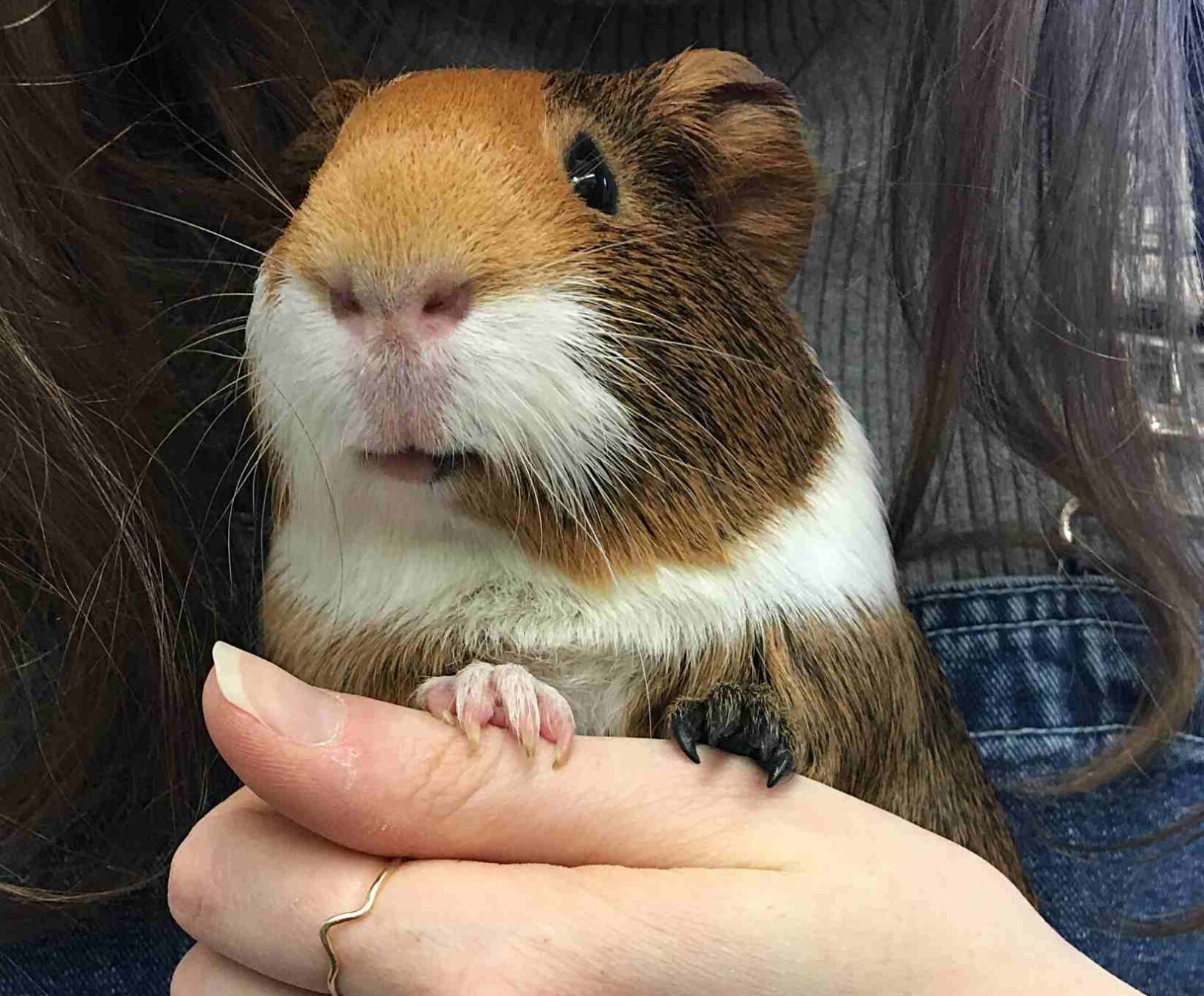 Meet Happy! This sweet, tri-colour guinea pig and his brother were abandoned, dumped in a ditch in Burnaby. Fortunately, a kind soul found them and brought them to the BC SPCA Richmond Education & Adoption Centre in January 2019. They were adopted within a month, but returned a few months later, as the owner’s landlord did not allow …