Mew (aka Katie-kitty) - BC SPCA 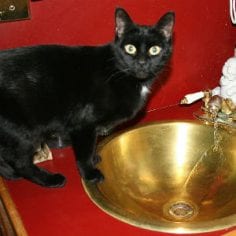 On October 8, 2014, Mew was found living on the streets of Trail with her young male kitten Xavier. They were brought to the BC SPCA Trail Regional Branch with the hope that they would find a loving family to belong to.

Mew was very sweet and loved affection. She was soon adopted on November 14. Her new guardians, Margo and Gary, renamed her Katie-Kitty and sent us a great update on how she has been doing since adoption:

Katie-kitty’s youth, energy and affection are thrilling. She can easily leap 12 feet from part way down the basement hallway to the top of the chest freezer…no problem. She appears and disappears like a phantom, first here, then there. As we move about she moves with us, following to see if anything interesting might be happening. She was terrified of our dog, Maxie, and attacked him a few times in the first day and would sit trembling on my lap in his presence, but now she has the courage to walk right under his belly, tickling his tummy with her tail while he stands very still. She is now pouncing on his fluffy tail and “counts coup” on him when she is feeling pesky.

She managed to disembowel the foam in the old couch via the tear in the fabric and when I came to see what she was up to, she squirted out of the room like a rocket. Apparently she has been told before not to destroy the furniture, but the wonderful scratching post she uses so well and the ball on a string inside the scratching post are in the cold part of the house so the nice old couch in the warm upstairs is more fun. She is welcome to it, it already having been torn in the past by past cats much more than she is doing now.

She meows often, her original name being Mew, when she is hungry or when she just wants to chat, and we are delighted to hear it. She plays with us with her oversized front feet and mouth but would never claw us or bite us hard, having had a kitten to work with so long. She knows to do no harm, but can play-fight with the best of them. She is clean and tidy, gentle and sweet, and ever so intelligent, which I guess she would have had to be to survive on the streets on her own with her kitten. We are terribly puzzled as to why she would be considered someone’s trash to be thrown to the streets when she is such a perfect jewel of a cat. She couldn’t be more wonderful!

What a lovely story from Margo, Gary, Katie-Kitty and Maxie. We thank this new family for taking a chance on a sweet stray and giving Katie-kitty her forever home. 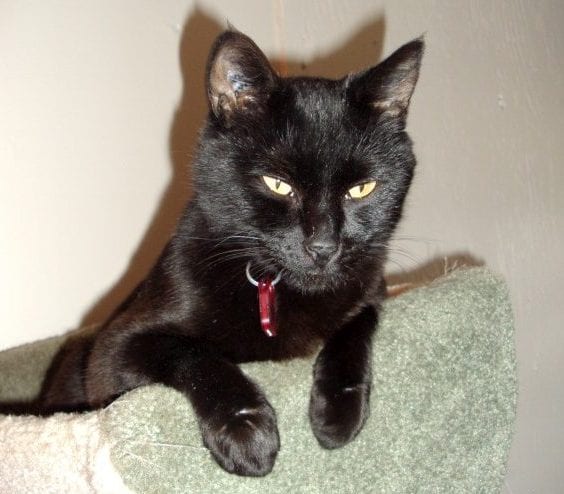 Espresso was about eight months old when she came under the care of the BC SPCA Trail Regional Branch in September 2009. Espresso had a very mellow personality, preferring to relax and spend her days with ease. She liked to curl up in someone’s lap or lie on the windowsill where she could soak in some sun …