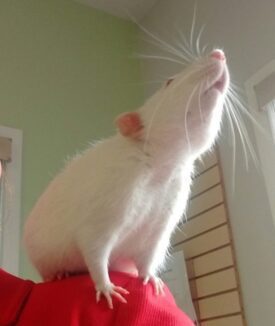 Even if our animals are only in our lives for a short while, to them, we are their whole lives.

When Jennifer adopted Martin the rat from the BC SPCA Surrey Education & Adoption Centre in May 2018, she instantly fell in love with his larger-than-life personality.

Martin certainly made the most out of his life with Jennifer, giving her many kisses and making her smile.

Now, Martin has passed on, but Jennifer has shared a beautiful and hilarious tribute to her bright-eyed pal:

I adopted Martin on my birthday and he proved to be one of the most enjoyable and entertaining pets ever.

Everything was big and dramatic with Martin. He was stubborn and refused to be redirected. He would literally throw the salad off his dish and over his shoulder as if to say, “Get this crap off my mashed potatoes!”

He never made friends with any of our other rats, despite my attempts at slow introductions. He always had other ratties nearby so he wouldn’t feel alone in the world, but he had to live in his very own cage.

Martin was very loving with his human family. He gave kisses easily and would sometimes do a playful touch-and-go of darting forward to kiss then taking off in a circuit of his cage, and running back for another kiss. 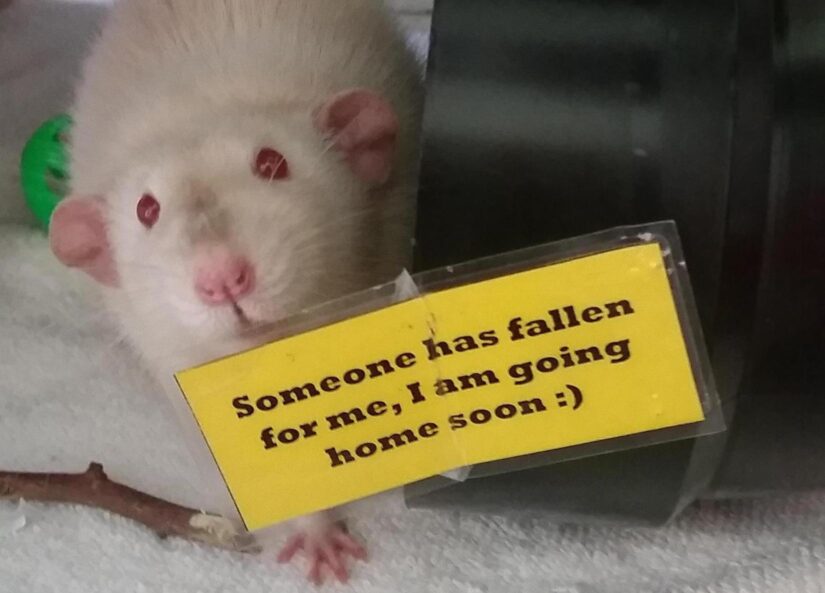 Martin was a ratty of action. He sought adventure. He quickly learned to use a basket as an elevator from his cage. He would get into the offered basket to signal if he wanted to go down to the floor for free-roam, or get into it to say he wanted back up to his home.

Martin was incredibly sensitive and his expressive eyes earned him the nickname Ancient Eyes. If any of my other rats were sick, or passed on, Martin would be upset for days, fussing about nervously, and only wanting attention at his door, refusing to exit his cage.

He was plagued his whole life with an anxiety over food. This developed because he had been severely neglected before being rescued by the BC SPCA. Because of this, we had to ensure that his food dish was always full. I also served him treats before any of the other ratties, or he would panic and race back and forth.

Martin had a chronic upper respiratory illness, which was effectively managed with four drugs administered twice a day.

Shortly after his second birthday, Martin developed a mass in his abdomen. Given his senior age (two years is old for a rat) and his chronic lung condition, with the vet’s advice we opted out of surgery.

Instead, we chose to provide pain control and monitor for his quality of life. Martin’s mobility gradually became limited and we made adjustments in his cage to support his needs. 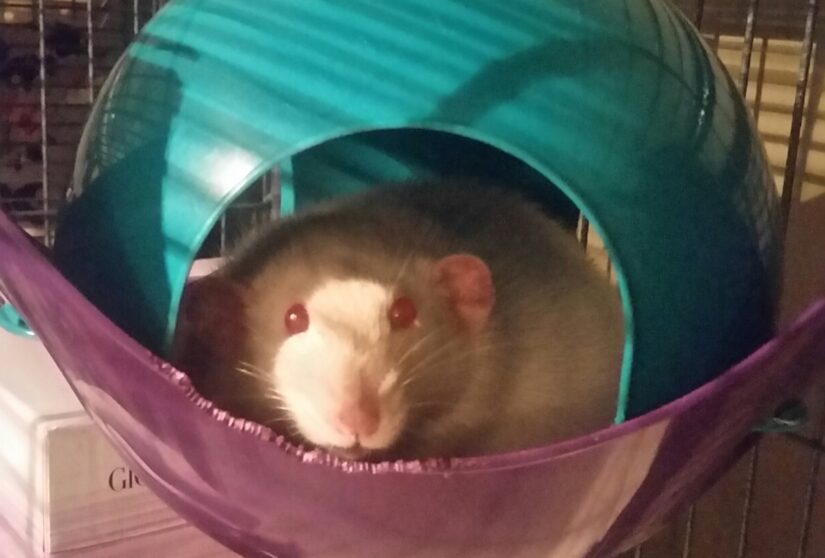 Martin continued to be adventurous in nature, so I would carry him around the yard to explore. Cedar trees were his favourite, and he would try to scramble out of my arms to get into them.

I spent the last two evenings of Martin’s life cuddled up next to him, reading aloud, while he lounged in his “temple-tent” on the floor. He bruxed and boggled with the attention.

His passing at Capital Hill Vet was easy. He was two years, seven months and three weeks old.

“I know you are happy over that rainbow bridge, Ancient Eyes, and cuddled in the arms of your daddy once again, giving him all those sweet little kisses. I love and miss you both so much.”

Thank you, Jennifer, for choosing adoption as your first option. We thoroughly enjoyed Martin’s story. Thank you for providing Martin with the fullest life that he deserved. Your commitment to your ratties is admirable and they are all very lucky to have you. 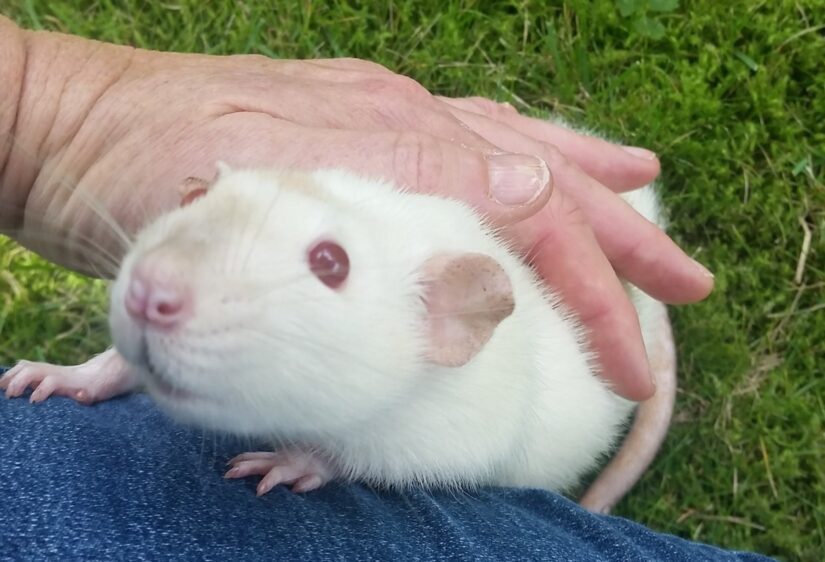 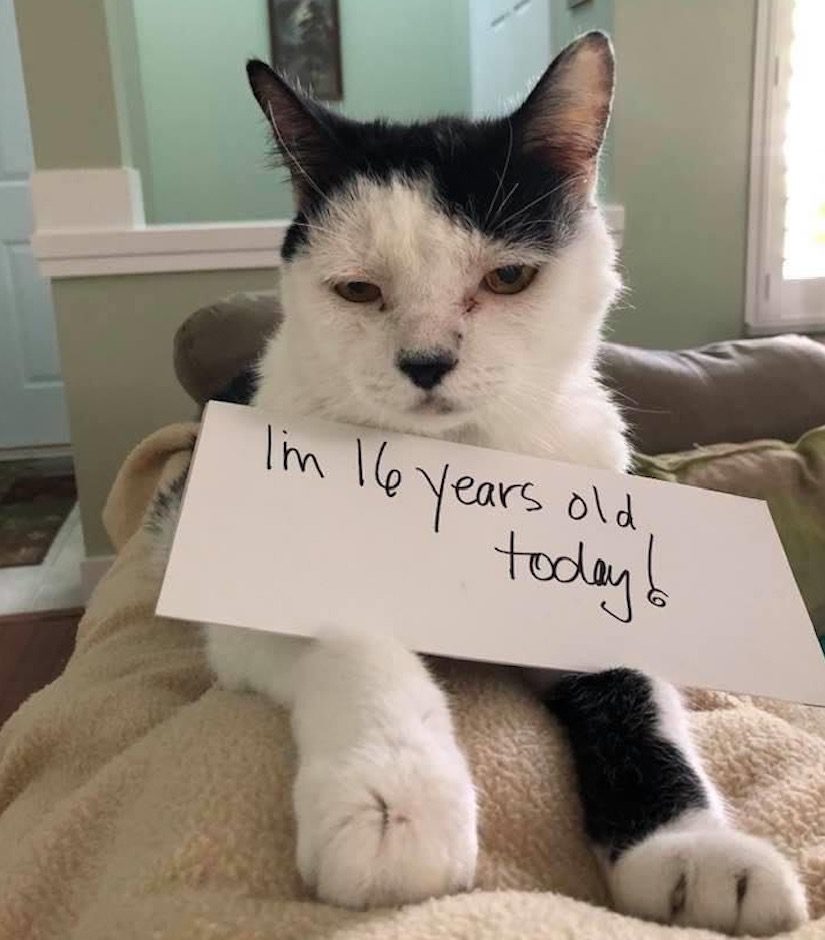 Sometimes we can’t quite describe the connection we feel when we first meet our meow mate. We know they are meant to be in our lives, so we don’t even hesitate to sign the adoption papers. For Jim and Heather, there was no doubt in their minds that Cosmo was the cat for them. When …