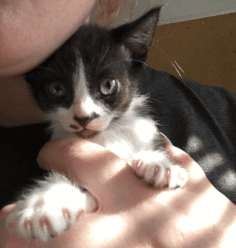 Christine’s cat, Indi, was sad and lonely when his feline sister passed away, but Christine wasn’t quite ready to adopt again.

One day in November 2018, within a month of his feline sister’s passing, Indi saw an adorable kitten on T.V. He couldn’t wait to introduce himself to his new friend. Within seconds, the kitten seemed to disappear. Indi looked at Christine, confused, who was looking back at him with empathy and determination.

The next day, Christine came home with a handsome young black and white kitten, this time for real.

Christine wrote to share the story of how she came to adopt Frank Frank Sir Pawsworth:

I have always had two cats, and sadly this year, in late October, I had to put down my older girl due to liver cancer.

The male that I had adopted as a companion for her, Indi, had never been the only cat in a household. He was super depressed.

I hadn’t planned on getting a new cat so soon. I was going to wait because I wasn’t ready yet.

But, I was watching TV with Indi one night, and a commercial featuring a kitten came on. He perked right up. He was so excited that he started trilling at the TV and ran up to it to try to introduce himself to the kitten. When the commercial ended, he shrank, visibly.

The next day I went off to the BC SPCA Burnaby Branch to find him a kitten.

I checked online first and saw the litter of four kittens that had recently been rescued. I saw Frank Frank Sir Pawsworth and I took him home.

Once he came home with me, I secluded him in a separate room with one of Indi’s blankets and went to do dishes. Within minutes Indi was at the door. He and Frank Frank Sir Pawsworth were both trilling and playing through the door.

So I thought, why not see what happens? I let him out and they have been inseparable ever since. Needless to say, I picked the right kitten for my family. 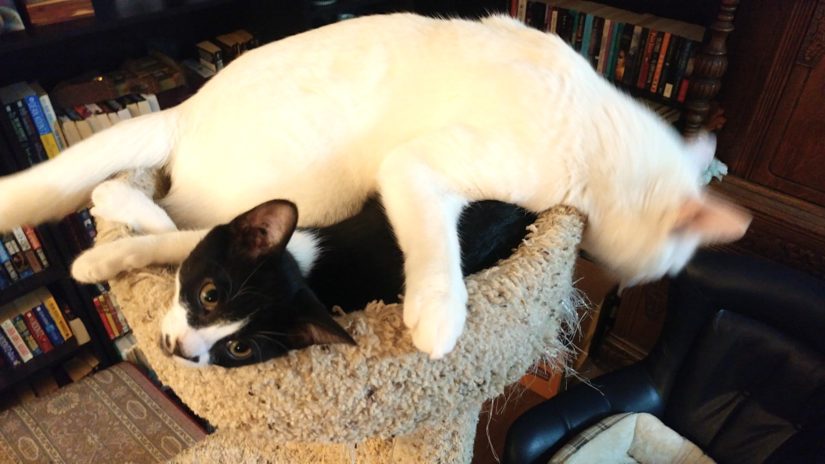 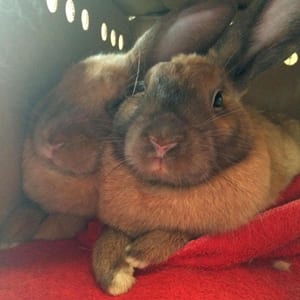 Orion and his brother, Apollo, were surrendered into the care of the BC SPCA Burnaby Branch in January 2016 because their previous guardian had too many pets and it was overly crowded. The two bunnies needed a nice, warm forever home where they could play all day long and have plenty of their favourite veggies …